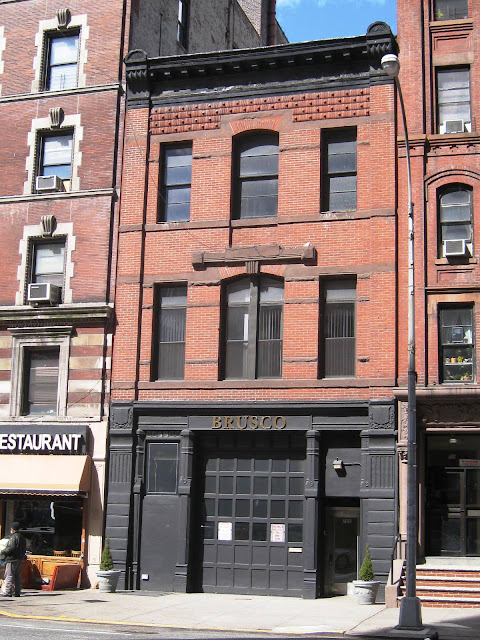 The Act of 1865 replaced the hodge podge  of volunteer fire companies in Brooklyn and Manhattan with a unified “Metropolitan District” fire department.   Within a decade the department was scrambling to erect up-to-date fire houses—no small task considering the rapidly expanding population.

With the introduction of the elevated rapid transit in the 1870s the Upper West Side saw increased development.  New homes, churches and commercial buildings required fire protection and in 1876 Ladder Company 16 was formed.  The new company was housed at No. 766 Tenth Avenue—later to be renamed Amsterdam Avenue—in an Italianate-inspired three story firehouse.

The rapidity with which the Fire Department was erecting stations is evident in that the house for Ladder Company 16 was identical to at least two others.  A noble cast iron base featured piers on either side pretending to be rusticated stone that supported fluted pilasters.  Heraldic shields surmounted their capitals.   The upper floors were clad in red brick trimmed with dressed and rough-cut brownstone.  Rows of textured terra cotta tiles lined up below the cast cornice. 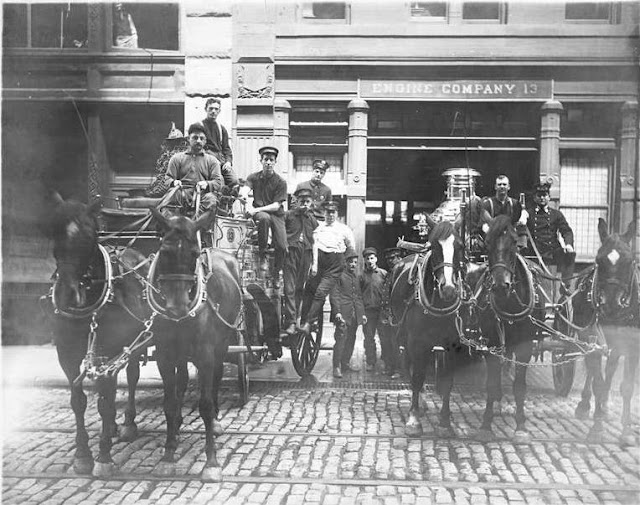 Six years later Ladder Company 16 was reorganized as Combination Engine Compay No. 47.  The ‘combination” referred to the unit’s assorted equipment:  a steam engine, a ladder truck and a hose wagon.

As the fire department grew an organized training regimen was necessary and in 1883 Assistant Chief Hugh Bonner originated the School of Instruction.   The third floor of Engine Company 47 was converted to training classes, creating the precursor of today's fire academy.  Along with the training school, instruction for the new Life-Savings Corps would be conducted here.

On January 26, 1883 The New York Times reported on the hiring of a Missouri-based instructor.  “Fire Commissioner Purroy has completed the arrangements for the services of C. Hoell to instruct the Life-saving Corps about to be organized in this City from members of the Fire Department.”  Hoell came from the St. Louis and had obtained a leave of absence to fulfill the position.

Only those firemen who volunteered were required to join the Life Saving Corps and the Commissioner knew how to expand the ranks if necessary.  The Times quoted the Commissioner as saying “if a sufficient number of firemen did not volunteer for this duty they would recruit the corps from sailors who have served in the Navy.”

By 1895 the Upper West Side was a booming neighborhood which The New York Times referred to as “itself a great city” and a “model community.”   The fire company at No. 766 Amsterdam Avenue had been reorganized yet again—this time in 1891.  Engine Company 47 moved out and in its place came Hook and Ladder Company 22.  On March 10 of that year the newspaper described its operations.

“Hook and Ladder No. 22’s house is a coaling station for the battalion, and an extra truck is kept there in case any truck should break down."  The article named the eleven men assigned to the house; a nearly fifty-fifty mix of English and Irish surnames:  Captain Barrett commanded the house, assisted by Lieut. Clement L. Daniels.  The other men were Paul Bauer, a 26-year veteran; Pierce English with 24 years; Nicholas Powers, Michael H. Roach, William Harrigan, Simon G. Murray, John Regan, Thomas J. Bennett and Edward J. Garland.

“The firemen in the West End companies are all of the first grade, which means that they have been a long time in the service and are efficient and courageous,” said The Times. “The small number of fires that do much damage compared with the total number of alarms in the West End proves the efficiency of the brave men in the companies stationed in this district.”

At the turn of the century trolley tracks ran down the center of Amsterdam Avenue creating both a convenience and a danger to residents.   Near the fire station were rows of tenement houses.  The firehouse with its horses and trucks drew curious boys from the neighborhood, one of which was little Alexander McGrath.   On October 15, 1906 The Times remarked that the 4-year old boy “was a favorite among the firemen of Truck 22.”

On the previous day Alexander was playing in front of the fire house with fireman Robert D. Lyon and Assistant Foreman Edward J. Fagan.  The youngest of seven children, he walked away from the fire house and stopped briefly in the avenue while talking to a playmate.  As the fire fighters looked on in horror, the little boy turned to cross the street and stepped into the path of a speeding trolley.

His body was dragged for several yards and “then his body was drawn under the front truck [engine],” reported The Times.  The firefighters rushed to the scene “but before the car could be brought to a standstill they were horrified to see the little fellow’s legs roll out at their feet from under the car wheels.  The rest of the body was drawn around the front axle and crushed to pieces.”

Women peering out from the tenement windows screamed, “and several fainted after seeing the ghastly sight,” reported the newspaper.  The firemen rushed to a nearby excavation and brought a beam to jack up the car to retrieve the little boy’s body.  The speeding motorman, James Boyle, was charged with murder.

The men of Hook and Ladder 22 responded to dramatic and life-threatening emergencies.  On June 8, 1928 the old boathouse of the Bloomingdale Yacht Club at 101st Street and Riverside Drive caught fire.  The two-story wooden building had been used recently as meeting rooms for various naval and sporting organizations and its location made fighting the fire exceptionally difficult and dangerous.

The retaining wall of Riverside Drive and the New York Central railroad tracks kept fire engines 800 feet from the fire.  When firemen tried to use a ladder to scale the 20-foot retaining wall, 40-year old John MacCormack fell.  He received severe lacerations and a fractured thigh.  In the end the fire burned itself out.

On July 22 three years later the basement of a 15-story apartment house on the northwest corner of 100th Street and West End Avenue caught fire.   The blaze started in a transformer room and quickly spread to an adjacent storage room where trunks, bicycles, golf bags and other flammable materials were stored.

As tenants rushed to escape the building and firemen rushed in to fight the fire, the gas lines leading to a meter in the storage room melted, causing an explosion.    Fire fighters in the storage room were knocked unconscious and two had to be pulled out by Fireman George Schaberick who suffered burns in the process.

As 19-year old Harriet Freeman scurried down the hallway on the second floor towards safety, another explosion shook the building.  Chunks of falling plaster struck the girl.  In all eight firemen, including Deputy Fire Chief Frank Murphy suffered injuries.

Every year following the erection of the Firemen’s Memorial in Riverside Park a memorial service to those firefighters who had died during the past year was held.   Each year approximately 1,500 uniformed fire fighters would march from Hook and Ladder 22 to the park for the ceremony.   The ceremonies were drawn to a close at the firehouse as well.  On October 8, 1934 The Times reported on one such ceremony.  “After the services the firemen and their officers, led by the Fire Department Band, marched by Hook and Ladder 22 on Amsterdam Avenue, where they were reviewed by Mayor LaGuardia and Commissioner McElligott.”

One of the Ladder Company’s most ambitious members was 27-year old Leo Blond who served here in the 1940s.  In 1943 he made the Honor Roll of the New York University School of Commerce, Accounts and Finance.   Depending on his tour of duty, Blond attended classes continuously either during the day or evening sessions and had done so since 1936.

A journalism and economics major, he told reporters that his “special ambition is to organize children of elementary school age into groups of junior firefighters, thus supplementing Fire Department publicity campaigns on fire prevention.”

He devoted his spare to to “civilian defense activities."  The scholar-firefighter found no conflict in his two lives. “I enjoy going to school and I also enjoy going to fires.”

On April 29, 1956 the city announced plans for a $1.433 million combined police and fire station on West 100th Street off Amsterdam Avenue.  Fire officials stated that Hook and Ladder Company 22 would be relocated into the new building.

Four years later the new complex was completed and after nearly a century of use, the fire station at No. 766 Amsterdam Avenue was closed.  Three years later it was converted to a truck garage with offices on the second floor.  Department of Building records noted that the third story, where the innovative fire fighter training school had operated was “to remain permanently vacant.” 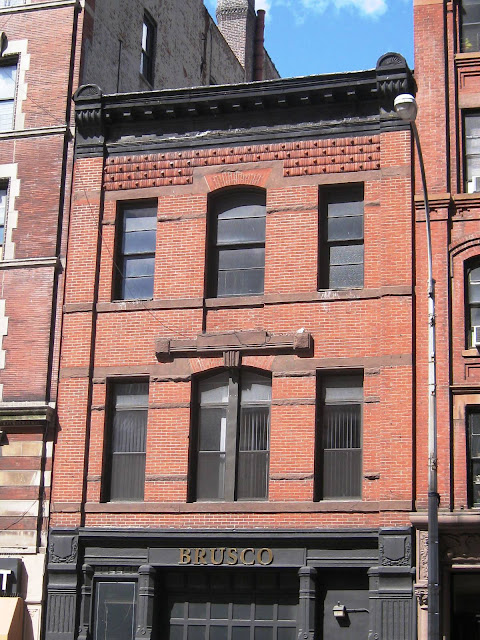 Today the unassuming old fire station is home to a real estate firm.  The windows have been replaced and the first floor somewhat altered; yet the handsome building where an important chapter in New York Fire Department history was written retains its architectural integrity.

non-historic photographs taken by the author
Posted by Tom Miller at 3:48 AM