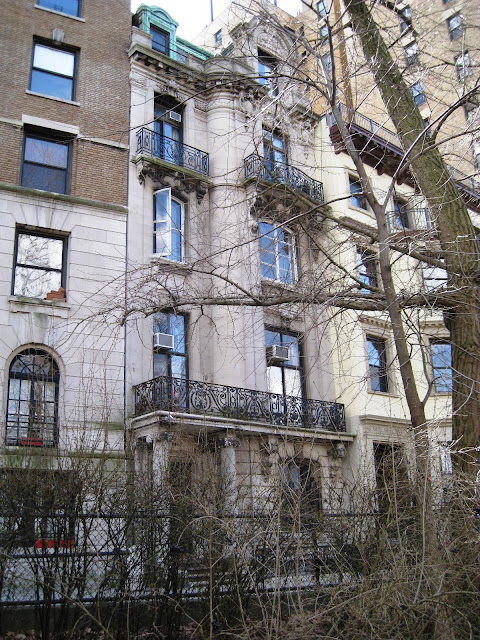 In the second half of the 19th century German-born brothers Gustave and Christian Herter set the standard of excellence in home furnishings and interior design through their firm Herter Brothers.  They not only designed high-end, fashion-setting furniture, but entire rooms including lighting fixtures and hardware, stained glass, paneling, plasterwork and carpeting.  Millionaires throughout the country sought the services of Herter Brothers to decorate and outfit their mansions—including William H. Vanderbilt, Mark Hopkins, Darius O. Mills and J. Piermont Morgan.

In 1870 Christian Herter met another German cabinetmaker, William Baumgarten.  Baumgarten had been in the country five years and was working for J. Ziegler & Co., another furniture and decorating firm.  Before long Baumgarten left Ziegler to assist in the Herter Brothers operation.

After Christian Herter’s retirement in 1881, William Baumgarten took the helm of Herter Brothers, preserving the firm’s prestige and unsurpassed excellence.   But a decade later, in 1891, Baumgarten struck out on his own, partnering with his brother Emile to form William Baumgarten & Company.  From their prominent showroom at No. 321 Fifth Avenue they continued to cater to wealthy clients.

Just two years after opening his operation, Baumgarten scored a coup among American decorating firms.  He negotiated the manufacture of Gobelin tapestries domestically, recreating the famous tapestries for the interiors of America’s millionaires at a time when period recreations were all the rage.  Baumgarten started out by bringing four French weavers to the United States; a number that would eventually grow to 80.

William Baumgarten’s personal life mirrored the success of his business and financial life.   On May 7, 1887 he married Clara Frankel and they began a family that would include three sons and a daughter.

In the meantime, a far-reaching project was underway along the Hudson River to the north.

In. 1873 Frederick Law Olmsted had proposed an ambitious plan to transform the scenic countryside along the Hudson River into a park and drive.  Starting at 72d Street and stretching north to about 129th Street,  Riverside Avenue (later renamed Riverside Drive) and its companion park followed the cliff-top topography.  Developers saw the drive with its breathtaking views as a potential rival to the crowded, commercially-threatened Fifth Avenue.

Before long exquisite mansions began rising along the new Drive—some thirty of which were free-standing.  Developers hired the most esteemed architects to design stretches of abutting residences marketed to the very wealthy.  Other millionaires purchased their own building lots and commissioned their own architects in order to produce custom-designed mansions in line with their specific personal wants.  Among these was William Baumgarten.

Baumgarten already knew William Schickel through the architect’s collaboration with Herter Brothers.  He commissioned Schickel & Ditmars to design a rowhouse at No. 294 Riverside Drive between 101st and 102nd Streets.  Construction began in 1900 and was completed a year later, resulting in a eye-catching, asymmetrical Beaux Arts mansion.

Clad in white limestone the five-story house was just two bays wide despite its generous 25-foot lot.  The offset entrance was a few steps above the sidewalk through a handsome columned portico.  The rusticated base supported a balcony with an elegant cast iron railing that stretched the width of the mansion.  Two smaller balconies at the fourth floor echoed the design.  The fifth floor mansard was ornamented by a withdrawn, copper sheathed dormer to the north contrasted by an exuberant carved limestone dormer to the south.

It is safe to assume that Clara Baumgarten did not have to worry herself with the interior decoration or furnishings for her new home.

The Baumgarten family settled into their new home and young Paul was enrolled in the prestigious Browning School.  On April 16, 1904 Paul was participating in the annual interscholastic games on the grounds of New York University.  Among the 16-year old’s teammates was Fahys Cook, the son of the wealthy Henry F. Cook.   The team was practicing for the upcoming shot put competition .

Cook, who was a year younger than Baumgarten, made his throw then walked out onto the field to recover the ball.  He was unaware that Paul Baumgarten was poised for his practice throw.  Just as Cook stooped over to pick up the shot, Baumgarten tossed the twelve-pound iron ball.  It hit the Cook boy squarely in the head.

Cook’s skull was fractured and he was taken to St. Luke’s Hospital where an operation was performed “as the only means of saving the boy’s life,” reported the newspapers.   Paul was overcome with grief and guilt.   “Baumgarten was completely prostrated by the serious accident which he had unwittingly caused and retired from all contests and went to his home,” reported The New York Times.

Two years after the unfortunate incident, William Baumgarten, now 61 years old, was traveling in Washington D. C.  There on Thursday April 26, 1906 he died suddenly.  On May 1 at 10:00 in the morning his funeral services were held in the Riverside Drive house.

Clara Baumgarten died in the house on October 6, 1909 at only 55 years old.  Her funeral services, too, were held here two days later. 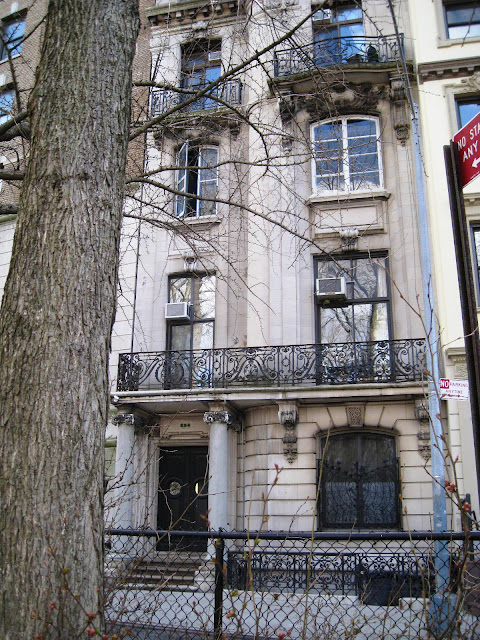 After only 13 years in the mansion, the Baumgarten family sold it to Emery Ferris in 1914.  Unbelievably, the costly residence with its superb interiors almost immediately became an upscale rooming house.  Among the first residents were 54-year old Julius Brehmer and Miss Elsie Ferguson.

In 1925 retired army captain Thomas Hayes and his wife lived here, as did Otis Morrill.  Hayes entertained a group of Argentine army officers on the night of March 18.  The following morning Mrs. Hayes was downstairs in the dining room chatting with another resident, Mrs. Zarr while her husband was in their rooms talking to Morrill.  While the men talked, Hayes cleaned his four revolvers.

Morrill left the room and, as he closed the door, he heard a shot.  The women downstairs also heard the report and rushed up.  When Morrill reentered the room he found Hayes slumped in his chair with a bullet wound to the chest.  Mrs. Zarr entered the room before Hayes’ wife and the wounded man told her he had accidentally shot himself, and pointed to the rags and a bottle of oil on the table.

The former captain never lost consciousness.  A doctor was called who did his best to treat the wounds.  Perhaps Hayes realized his death was imminent, for as the physician worked on him he “talked with his wife about business matters up to within a few minute of his death,” said a newspaper.

Playwright Boris de Tanko lived in the house in 1931.  During his residency he wrote a three-act drama, The Red Swan.  At the time the proprietor of the rooming house was Madeline Tully.  Mrs. Tully would bring far more drama into the house than would the playwright.

In the spring of that year the preparations for the sensation trial of ex-convicts Harry Stein and Samuel Greenhauer (also known as Greenberg) were underway.  The two ex-convicts were charged with the murder of Vivian Gordon.  Miss Gordon had been scheduled as an important witness in another trial, but was murdered before she could testify.

Detectives had reason to suspect that Madeline Tully had valuable information.  But she was not interested in talking to them.  Fearful that she would flee the state, she was held on $12,500 bond.  Chief Assistant District Attorney I. J. P. Alderman called her a stubborn witness and said she “had refused to give information of importance and that he had reason to believe that she would not be available for the trial…if released.”  He went so far to tell the judge “the woman is accessory to the fact.”

During the salacious trial another mobster, Harry Schlitten, admitted to his part in the murder.  He was the driver of the automobile in which Vivian Gordon was strangled to death.  He told the jury that Stein had informed him “If I don’t get a certain party out of the way, a friend of mine is going to jail.”

He admitted to the court that the following day he received $212 from Stein from the sale of Gordon’s diamond ring that he had sold for $600.  He also testified that after the strangulation Stein had uttered “She’s done now; she’s finished.”  After they dumped the body in a ditch in Van Cortlandt Park, Schlitten was directed to drive to No. 294 Riverside Drive.  Stein dropped off Vivian Gordon’s expensive fur coat there.

Madeline Tully’s dalliances with mobsters perhaps laid the trend for tenant Edward Burke who lived here at the same time.  On August 9, 1933 the 31-year old was arrested along with four others in a police raid of an apartment at No. 222 West 84th Street.   Burke was arrested on violating the Sullivan Law (a gun control law in New York State) and anti-narcotic laws.  The Times reported that “five pistols, more than 100 rounds of ammunition and two opium pipes were seized by police” in the raid.

But the tenant list was not all gangsters, opium users and other seedy characters.  In 1937 the anthropologist Louise E. Bisch lived here.

In May 1940 Emergy Ferris sold the former Baumgarten mansion after 26 years of ownership.  The Times reported that “A doctor bought for remodeling into small units the five-story elevator dwelling at 294 Riverside Drive.”  A year later the conversation was complete.  There were now three apartments on the first floor and four each on the upper floors.

Among the first renters was the colorful Soviet Nicholas D. Avxentieff.  He had been President of the Council of the Russian Republic of 1918 and Minister of the Interior during the Kerensky government.  During the chaos of the Russian Revolution, he had been a member of the All-Russian Constituent Assembly (which lasted only 24 hours) and had been repeatedly arrested.  He was twice imprisoned by the Bolsheviks and was arrested by the White Russian Admiral Kolchak in Siberia.

He arrived in New York in 1921 as a refugee from the Communist regime and became president of the New York group of the Russian Socialist Revolutionary Party.  He was chief editor of the monthly Russian language magazine “For Freedom.”   He fervently deployed the Nazi attack on Russia and issued a statement saying “the interests of the democracies as well as of the Russian people demand the defeat of the Nazi invaders of the U.S.S.R.”

The grand mansions along Riverside Drive in the immediate neighborhood were razed for modern apartment buildings through the 20th century.  Today, only the Baumgarten residence and two houses next door remain on the block.