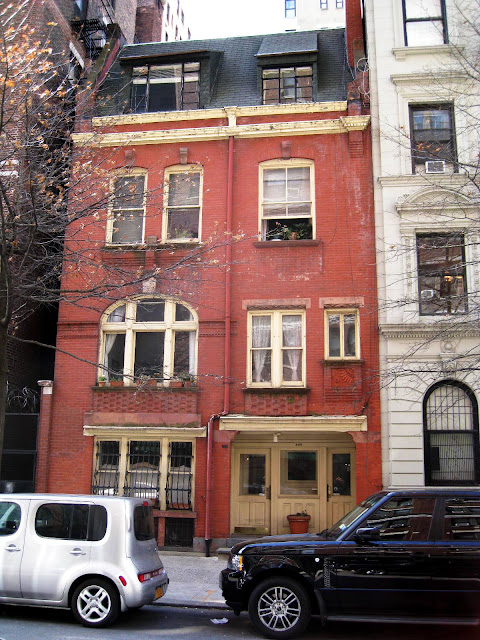 Ralph Samuel Townsend was born in New York in 1854 to a builder, also named Ralph Townsend.  By the time he was in his late 20s, the younger Townsend was listed in city directories as an architect.  The 1880s were an exciting time for that profession as a profusion of styles and materials broke the mold of the old brownstone rowhouse.

The Upper West Side was booming as public transportation, street lighting, and sewers were introduced.  Speculative developers bought up entire block fronts to be transformed into rows of tall row houses.  Townsend, now 30 years old, was doing well enough by 1884 that he purchased the building plot at No. 302 West 102nd Street and designed his own home.  It would be like no other residence in the city.

The charming four-story brick structure drew from the latest in architectural fashion.  The design was a variation of the Queen Anne style which the AIA Guide to New York City terms Arts and Crafts.  Townsend dipped into the Aestethic Movement for decorative details.  The deeply recessed and paneled entrance and the quirky asymmetrical dormers that resemble opened deck hatches gave the city house a cottage feel.  Townsend made sure that no two openings balanced one another, creating a delightful jumble of shapes and sizes.  The two-doored entrance, possibly, allowed separate access to Townsend’s office and living space. 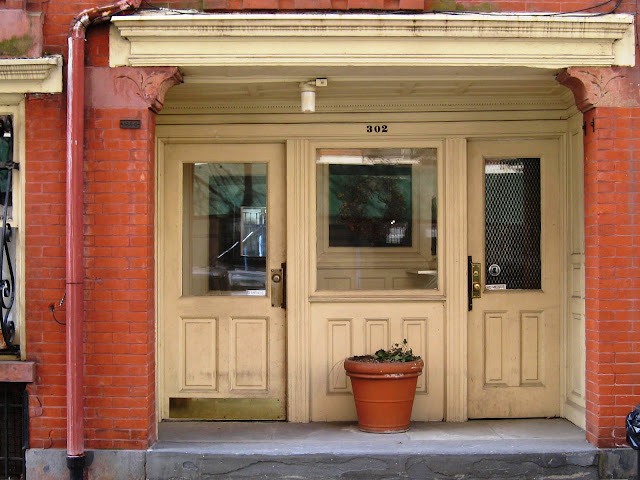 Townsend did not live in his creation exceptionally long; and it became home to Col. Joseph Biddle Wilkinson and his family.  Wilkinson, who came from an old New Orleans family, was married to the former Lydia Duval and the couple had two daughters in the house, Lella and Violet.

On December 23, 1896 Lella married Henry Taylor Statts, Jr. in the nearby St. Michael’s Protestant Episcopal Church.  Among the guests who filed back to the house on 102nd Street were Isadore Strauss, co-owner of Macy’s Department Store, and his wife Ida.  The couple lived two blocks north, on Broadway where, seven years later, a memorial would be erected to their memory after they perished on the RMS Titanic.

Wilkinson’s position as United States Appraiser caused him to  divide his time between New York and Washington D.C.   The Board of General Appraisers of the United States, established in 1890, was responsible for settling customs disputes.  Members, like Wilkinson, were nominated by the President and confirmed by the Senate.

Typical of his cases was the one the Board heard on August 30, 1897 at No. 125 Bleecker Street.  The Treasury Department had effected a new Tariff bill that made the importation of wool, until now not dutiable, subject to eleven cents per pound duty.  The Sun reported that “There were about ninety protests on file from merchants,” who were attempting to persuade the Board to have the bill rescinded.

The very nature of the work caused disagreements and disputes among the members.  Colonel Wilkinson appears to have been of a singular and unchangeable mind and it may have cost him his job.  The President could, without stated reason, ask for the removal of any of the nine appraisers and on January 23, 1899 President William McKinley did just that.  He requested the resignations of three of the appraisers, including Colonel Joseph B. Wilkinson, Jr.

The politically and socially-humiliating turn of events drew no comment from Wilkinson, however the New-York Tribune reported that “The officials here decline to make any statement in regard to the matter, yet there is reason to believe that want of harmony in the Board is one of the causes of the President’s action.”

The Wilkinson family left New York for New Orleans.  The house on 102nd Street was purchased by Louisa Christie who leased it to the elderly and retired Ausburn Birdsall.  Formerly of Binghamton, New York, he had been the president of the Binghamton, Dushore and Williamsport Railroad Company.  Birdsall had been active politically in the Republican Party and was president decades earlier of a Tammany political organization.

By the time World War I drew American soldiers overseas, H. Remington was living here with his family.  Daughter Marjorie was away at Bryn Mawr studying history, economics and politics.

In 1918 Remington partnered with S. O. Simons and H. Frantzen to incorporate The Hot Flo Faucet Corporation with an outlay of $50,000.  The new firm used the 102nd Street address briefly, before establishing headquarters at No. 1400 Broadway.

The Hot Flo Faucet Corporation was successful, producing ingenious electric faucets that immediately turned cold water into hot.  Before long the company would branch out into the manufacture of electric water heaters and other related household products.

Today Ralph Townsend’s charming house is divided into spacious cooperative apartments, one per floor.  It’s delightfully eccentric façade, however, remains for the most part, intact.