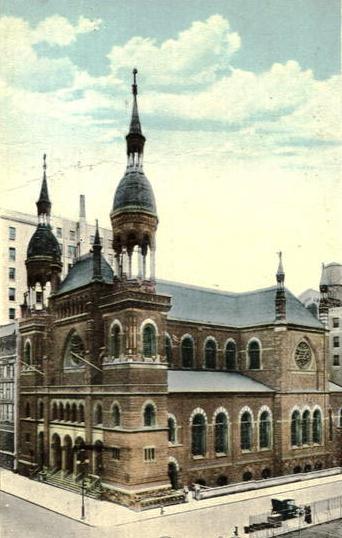 Although Spanish and Portuguese Sephardic Jews first arrived in New York in 1654, the great influx of German Jews would not begin for a century and a half.   In 1845 thirty-three German immigrants founded the Temple Emanu-El in a second story loft on the Lower East Side.


In the two decades between 1835 and 1855 around 250,000 European Jews immigrated into the United States, many of them settling on the Lower East Side and establishing what became known as Kleindeutschland, or “Little Germany.”  The tiny congregation exploded as more and more German immigrants were attracted by familiar services in their native language.


By 1865, after moving twice already, the congregation purchased land on the northeast corner of Fifth Avenue and 43rd Street.   The avenue was still sparsely developed this far uptown; however only seven blocks north the grand white marble St. Patrick’s Cathedral was rising and ten blocks to the south the brownstone mansions of William and John Jacob Astor announced that society was on the way.


If the congregation meant to rival the soaring Gothic structure of St. Patrick’s, it succeeded.    Architects Henry Fernbach and Leopold Eidlitz worked together in designing the structure.    Fernbach was, reportedly, the first Jewish architect in the country and had been here only 12 years when he received the commission.


Synagogue architecture presented a problem for mid-19th century designers.  Gothic Revival had already become associated with Christian churches and Greek Revival temple designs had nothing to do with the historical context of the Jewish religion.  Moorish motifs, on the other hand, reflected the pre-Inquisition period when Jews enjoyed relative freedom in Spain.


The completed temple was not only exotic, it was immense – the largest synagogue in the United States, capable of holding 2,000 worshipers.   One hundred and four feet wide, it stretched back along 43rd Street 184 feet.  The Dictionary of Architecture later called the style “Saracenic,” while the New York Times was more accurate: “The style of the building may be named as Moorish; but like most modern structures, whether in good taste or not, it will exhibit the features of several styles of architecture.”


The interior was equally breathtaking.  The soaring space rose to the equivalent of five stories with supporting pillars over 60 feet high.  Moorish arches were carved and stenciled.  Every inch of ceiling and walls was decorated.  The woodwork was of black walnut and white oak and “the seats upholstered in the best manner, the aisles richly carpeted and the floors of the portico and vestibule…tessellated,” reported The Times.

In the basement were a lecture room and Sabbath school rooms that could accommodate 400 to 500 children, robing rooms and other “auxiliary rooms.”


A large police presence was necessary to control the crowd prior to the opening of the new temple.  Tickets had been issued days ahead—“just enough to fill every seat in the edifice”—and, according to The Times, “the anxiety to secure them was very great.”


And then, an hour and a half before the service was to begin at 4:00 pm, the people were let in.   “When the doors were opened,” said The Times, “there was a crushing and crowding in which ladies’ crinoline and gentlemen’s hats suffered severely…when all the seats were filled the doors were closed, and the policemen stood before them and permitted no more to enter.”


The newspaper called the building “magnificent,” and the New York Daily Tribune said it “is beyond doubt the most elegant Jewish house of worship in America.”
It was a progressive-thinking congregation and nine months later the doors were thrown open to music lovers of any religious persuasion for a concert on the impressive pipe organ which The Times maintained was “one of the largest (if not the largest) and finest organs ever built in this country.”  The immense organ stretched the entire length of the choir gallery, boasting nearly 4,500 pipes.  The exposed pipes were gilded and polychromed.  The newspaper reported that “The Temple was filled with the elite of the City and amateurs of music, all of whom enjoyed a rich treat of harmony…The Temple organ will doubtless be one of the many attractions in future for all who have music in their souls, whether citizens or strangers.”


The progressive nature of the congregation raised eyebrows when in 1879 it was proposed to initiate Sunday services for those members who could not make Sabbath services due to work obligations.  A few weeks after the proposal was put on the table, The Times remarked that it “created a profound impression in Hebrew circles, and may possibly prove the starting-point of a bitter controversy.”
That same year the German language services were abolished in favor of English and perhaps the greatest shock of all came when the popular Unitarian minister Rev. Dr. Henry W. Bellows was invited to preach the sermon for Thanksgiving services.


“Such an event was believed to be without precedent in the religious world,” said The Times, “and there was no little curiosity to see how the celebrated divine would comport himself under the extraordinary circumstances.”  The temple was filled to standing room for what was undoubtedly one of the first mixed-faith services in American history.


The wealth and prestige of Temple Emanu-El was, perhaps, reflected in the $10,000 salary Rabbi Dr. Gustave Gottheil was earning in 1880—about $200,000 by today’s standards.
The congregation continued to grow and prosper into the 20th century.  But as it did, the area changed.  The neighborhood of marble and brownstone mansions was, by the 1920's, filling with tall commercial buildings.  Like the millionaires who had abandoned the surrounding palaces, the decision was made to move congregation further uptown.


On January 6, 1926 Benjamin Winter purchased the property then resold it two weeks later to William B. Ward for $6.5 million—the highest price ever paid on Manhattan.  Ward said “I bought the northeast corner of Forty-third Street and Fifth Avenue believing it was one of the finest corners on Fifth Avenue available for improvement with a high class commercial structure.”
Within two years the exotic Moorish spires of Temple Emanu-El would reign over Fifth Avenue and 43rd Street no more.  In its place would rise the Lefcourt National Building, an Art Deco inspired skyscraper that remains today.
Posted by Tom Miller at 2:53 AM