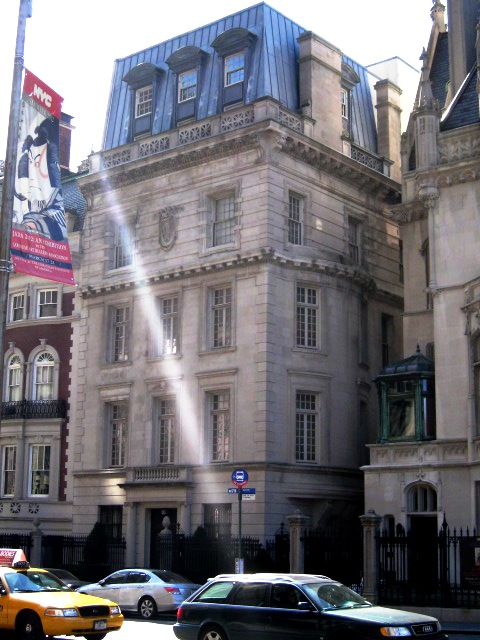 In 1915 the wealthy widow Lizzie Nichols kept mainly to herself.  She had grown to an ample 250 pounds and was still recovering from her husband’s sudden death a year earlier.  On the evening of September 9 the house was unusually empty.  It was the butler’s night off and the cook, Ileona Toivonen, had gone home around 8:30.  Only a maid, Edith Langfeldt, and Onne Talls, the “second man” of the house, remained downstairs while the 60-year old Lizzie was in her sitting room on the third floor of her magnificent mansion at No. 4 East 79th Street.


Around 9:30 the basement door bell rang.  Onne Talls and the maid answered it to find three men, one of which held a wrapped package.  When he announced that he was to deliver the package to Mrs. Nichols, Talls admitted him.  The other men rushed in behind him, one brandishing a revolver.


The servants were bound and gagged at gunpoint, then the three burglars rushed upstairs.  While faint noises from upstairs filtered down to the servants, Edith worked frantically to free herself.  She worked her hands free, then untied the handkerchief that bound her ankles and tore the gag from her mouth.  Without pausing to untie Talls, she ran to the telephone and called Police Headquarters.


Having alerted the police, she rushed up the stairs to help her mistress.  There in the third floor corridor she found the body of the Elizabeth Griggs Nichols.


A much slimmer Lizzie Griggs had married James E. Nichols in 1878.  The self-made man grew up on a farm in Meredith, New Hampshire and came to New York City in 1868 as a representative for two woolen mills based in his home state.  A decade later he and his associates took over the grocery wholesaling business of Fitts & Austin, establishing Austin, Nichols & Co., of which he was senior partner.


As the turn of the century neared he was also heavily involved in real estate (“prominently identified with the development of the commercial life of the west side of Manhattan,” according to The New York Times), and banking.  He was a Director and Vice President of the Irving National Bank; a Director of the Broadway Trust Company; the Fidelity Trust Company, the Childs Company; and the Merchants’ Refrigerating Company.


The athletic Nichols was also an avid horseman, owning several thoroughbreds, and a big game hunter.  He was intrigued by polar exploration and his firm provided the food supplies to the Greely, Peary, Fiala, and Roosevelt arctic expeditions.


Meanwhile, railroad magnate Henry H. Cook anticipated the upward migration of millionaires north along Fifth Avenue across from Central Park.   In 1883, while the cream of New York society was still constructing marble and limestone residences in the 50s, Cook completed his grand mansion at the corner of 78th Street.


To ensure that his imposing granite home was not tainted by commerce, as was slowly happening in the blocks to the south, Cook bought the entire block from Fifth Avenue to Madison Avenue, 78th to 79th Street.   He then methodically sold off the plots of what became known as “the Cook Block” with the codicil that only one-family homes could be built on the site.


In 1912 The New York Times would recall “Not only, according to his idea, was the block to be used for private homes forever, but the new houses were all required to be of a certain type of construction, and he would not sell to any one who was not able to willing to improve his plot in splendid style.”

In June 1898 James E. Nichols added his name to those who would build “in splendid style.”  He purchased the lot at No. 4 East 79th Street, directly behind the magnificent French Gothic chateau of Isaac D. Fletcher that was currently being constructed.


The Nichols house, separated from the Fletcher mansion by a service alley, was completed in 1900.  Five stories tall, it was entered at street level above an American basement—the latest in architectural vogue.  The showy Beaux Arts elements--scrolled carvings, a bowed bay with French-styled windows and a flamboyant mansard--fought for attention with the scene-grabbing Fletcher residence.

The Times deemed the home “magnificently furnished, being especially notable for the splendid collection of wild animal heads gathered by Mr. Nichols.”   To protect Lizzle’s costly jewelry, safes were cleverly hidden within the walls throughout the upstairs private rooms.


Unlike most of the houses that rose along the block, the Nichols mansion was seldom the scene of glittering entertainments or inclusions in the society pages.  Perhaps because of Lizzie’s increasing girth, the couple lived comparatively quietly.   In 1914 they sailed to Europe and while in Marienbad, Austria, Nichols was stricken with heart disease.  As Lizzle sat by his bed, James E. Nichols died on July 22.


Mourning and extremely wealthy, Lizzie returned to No. 4 East 79th Street surrounded by what she considered to be a faithful staff.   Not long after her return, butler Arthur Waltonen left the position and was replaced.  It would be the first domino to fall, ending with the tragic death of Lizzle Nichols.


Lizzie’s former butler knew where the hidden safes were and he knew that she kept the keys to her jewelry boxes secured under her corset at the back.  Waltonen and Onne Talls devised a complex plan to steal the estimated $37,500 worth of jewels.


On the night of September 9, 1915, it was Arthur Waltonen whom Onne Talls admitted through the basement door, along with an accomplice referred to by the newspapers as “an unnamed Italian.”  The binding and gagging of Talls along with the maid was a charade—one that unraveled relatively quickly.


When Edith Langfeldt discovered the body that night, The Times reported that “A towel was wrapped tightly about her throat and a sheet had been thrown around her shoulders; her face was blue from strangulation, and her glasses had been broken, apparently in a struggle…the three men apparently had had to fight to overpower her.”


Although police arrived within five minutes of Edith’s phone call, the men had disappeared.   When the servants were questioned, the cook remembered seeing three men loitering around the front of the house when she left.  She recognized them “as friends of Talls.”  It was the lead that eventually resulted in the arrest of the criminals.  Because Talls did not take part in the murder he was given a life sentence.  His accomplices went to the electric chair.


On September 12 the funeral of Elizabeth Nichols, who left a $2 million estate, was held not in a socially-fashionable church, but “from an undertaker’s chapel at 406 Fifth Avenue,” as reported in The Times.  The body of the widow was place next to her husband in the family vault in Woodlawn Cemetery.


Five months prior to Waltonen’s arrest in September 1916 in Chicago, Miss Catharine A. Fitzpatrick bought the Nichols residence for $350,000.  “It is in the famous Cook block,” reported The Times, “which is one of the best developed private home blocks in the city…It will be remodeled for Fall occupancy.”  Catharine commissioned architect Herbert Lucas to make the changes in the home.

She never moved in, apparently.  A month later banker Joseph Wright Harriman owned the house and it was Harriman who paid Lucas the $3,000 to construct a new conservatory on the roof.  The Harrimans divided their time between East 79th Street and their country estate, Avondale Farms, in Brookville, Long Island.

Harriman was the President of the Harriman National Bank and on May 21, 1922 the engagement of his only daughter, Miriam, to Albert Lincoln Hoffman was announced.  Hoffman was the son of the socially-prominent Mr. and Mrs. Francis Burrall Hoffman and had married Leta Sullivan in 1918.  Leta tragically died the following year after the birth of a son.


Hoffman was a "club man"—having memberships in the Knickerbocker, Racquet and Tennis, Harvard, and Piping Rock Clubs—and was an officer of the National City Bank.  Miriam was “prominently identified with the work of the Junior League” (she was vice president), and was a graduate of Miss Spence’s School.  The Times noted that the engagement was “of keen interest to society, owing to the prominence of both families.”


But something went wrong.


On September 19 Harriman curtly announced that the engagement “has been broken by mutual consent” and that he “would make no further comment.”


Miriam finally married four years later in St. Bartholomew’s Church.   She wore her mother’s wedding gown as Joseph Harriman escorted her down the aisle.   The reception was held in the 79th Street house.  Mariam and her new husband, Boykin Cabell Wright, moved to 1088 Park Avenue after going abroad on their wedding trip.


The Harrisons were followed at No. 4 in 1926 by Mrs. Clara Jay William Keech.  The former wife of Colonel Frank B. Keech, she was president of the Virginia Day Nursery, an old and esteemed institution.  Mrs. Keech provided scholarships to the National Academy of Design for talented boys from the East Side.


When Clara Keech died at her winter home in Boca Grande, Florida, on February 9, 1937, the house was inherited by her broker son, Gilbert W. Keech, who died within the year.


At around the same time Ogden Phipps married Mrs. Lillian Stokes Bostwick McKim.  Both parties were divorced and the understated wedding took place in the bride’s apartment at 117 E. 72nd Street.  Phipps was one of the nation’s most outstanding court tennis and racquets players and a grandson of Ogden Mills.
In April 1938 Phipps paid cash for the 79th Street house.   Phipps' new neighbors included millionaires like William C. Dickerman, Charles W. Ogden, Sumner Ballard and Winthrop W. Aldrich.  On the corner of Fifth Avenue was the Duke house and, along the avenue, were the homes of Mrs. Payne Whitney and Joseph F. Feder.  In reporting the sale, The Times remarked “This block has attracted wide interest because of its resistance to the invasion of apartment houses.”

Department of Buildings records are sketchy; but it was possibly the Phipps who were responsible for the toning down of C. P. H. Gilbert's turn of the century design.  The bowed bay to the front was removed and most of the Beaux Arts pomposity removed to produce a more understated, modern dwelling.
Lillian Phipps was deeply interested in the arts.  On November 8 she held the first of a series of twelve illustrated lectures by Mrs. Helen Appleton Read on “the season’s major art events.”  Reflecting society’s ongoing love of late hours, the lectures began at 11:00 pm.


The Phipps remained in the house until 1946, when it was sold to become the French Mission to the United Nations.  It was here on May 6, 1948 that the UN subcommittee met to discuss the five-point outlined submitted by France as the working bases for a study of the provisional regime for Palestine.


Despite Henry Cook’s stipulation that only one-family residences could be built on his block, in 1992 No. 4 was converted to offices and, on the uppermost floors, two duplex apartments.  The renovation was short-lived, however, and in 2005 it was reconverted to a single-family residence; no doubt much to the approval of the late Mr. Cook.

photographs taken by the author
Posted by Tom Miller at 3:39 AM