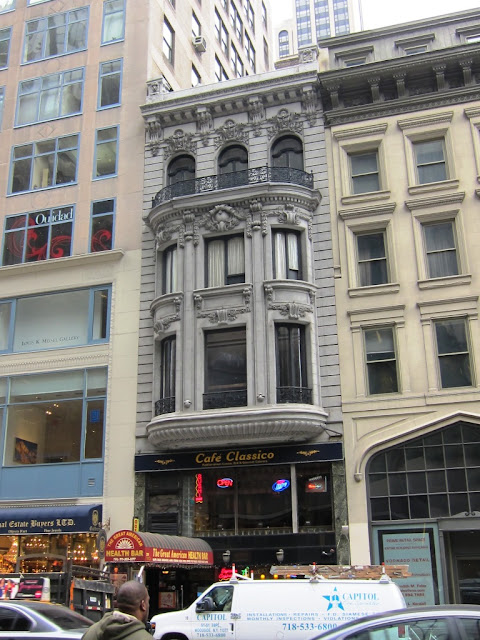 The marriage in 1891 of William H. Vanderbilt’s granddaughter, Maria Louise Vanderbilt Shepard, to William Jay Schieffelin was, perhaps, the social wedding of the season.  Not only did Louise have a sterling pedigree; but the groom came from one of the oldest and most respected families of New York and was grandson of John Jay, the first Chief Justice.
Vanderbilt hosted a wedding breakfast for 600 guests who filed past tables groaning under the weight of silver wedding gifts, including two dishes sent by President Benjamin Harrison and First Lady Caroline Lavinia Harrison.  The foremost wedding present by far, however, was a “completely-furnished house, the gift of the bride’s mother,” as The New York Times reported.


When the newlyweds moved in, they needed only to bring their clothing.  Margaret Shepard had chosen and supplied the furniture, rugs, wall coverings – in short, everything.
Young Schieffelin, who was graduated from Columbia College and studied chemistry in Germany, joined the family business, a century-old wholesale drug firm.    The tireless millionaire would go on to become chairman of the board and highly active in political and social reform.
The French-style mansion was the scene of glittering social events throughout the 1890s.  As the turn of the century neared, however, more and more millionaires abandoned the neighborhood as businesses inched up Fifth Avenue.  In 1898 Margaret Shepard took the reins again.

Around 1898 she purchased two residences on East 66th Street and commissioned Richard H. Hunt to design a double-wide mansion for the Schieffelins.  As the new house was nearing completion, The New York Times reported the sale of the 57th Street house on February 19, 1899 (without naming names); saying that the “fine dwelling” had “changed hands.”   In referring to the sale, along with two others in the area, the writer noted “that the supremacy of the Fifth Avenue section below Fifty-ninth Street has not yet altogether vanished, in spite of the growing popularity of the district east of Central Park.”


The buyer, who apparently shared the opinion that the supremacy of the neighborhood had not yet vanished, was Samuel W. Bowne.   Bowne and his wife Nettie moved into the house in 1900 and lived there quietly, without the lavish entertaining of the former owners.
Samuel Bowne had started out in a brokers office on Wall Street; then took a job as a traveling salesman for the manufacturing chemists Scott & Platt.  In 1874 the enterprising Bowne became a partner and the firm changed its name to Scott & Bowne.


Bowne’s fortune was guaranteed when he developed the highly-popular Scott’s Emulsion of Cod Liver Oil.   By the early 1900s he was also President and Director of the Cold Process Co. of New York; and held directorships with the Aetna National Bank, the Independent Milk Products Co. and the Baldwin Steel Co. of Charleston, West Virginia.
Bowne was active in the Methodist Episcopal church and gave generously.  A year after moving into No. 35 West 57th Street, he gave $100,000 to the New York Church Extension and Missionary Society (of which he was president) and in 1907 built the Bowne Hall of Chemistry at Syracuse University.  He also donated a gymnasium to the Drew Seminary in Madison, New Jersey.

Samuel and Nettie had no children and Mrs. Bowne was rarely, if ever, mentioned in the society pages.  More often Samuel’s work with the church and his donations, often in conjunction with his close friend, John S. Huyler, were reported.  The two men were intimately connected and often shared in their philanthropies.

In 1909 the 66-year old Bowne suffered a paralytic stroke and his condition slowly worsened.  A year later in September he began a noticeable decline.   The New York Tribune reported “When Mr. Huyler heard that Mr. Bowne had been taken ill suddenly, he remarked that Mr. Bowne should have laid aside his business cares earlier, as he had done.  Shortly after this remark, Mr. Huyler died.”

Nettie Bowne withheld the news of Huyler’s death from her husband, telling him only that he was ill.  Around two weeks later, however, Bowne reportedly muttered feebly “Poor John! He has gone.”

The millionaire chemist and philanthropist died in the house within a month of Huyler’s death.   On October 30, 1910 the New York Tribune printed an extensive obituary.   Nettie Bowne was somewhat omitted from the account.  “Samuel W. bowne, sixty-seven years old, millionaire maker of a well known cod liver oil preparation, philanthropist and devoted friend of the late John S. Huyler, died yesterday at his home, No. 35 West 57th Street…Their friendship was exceptional.”

On November 13 a joint memorial service was held in the John Street Methodist Episcopal Church for Bowne and Huyler.  Dr. Streeter remembered the men who had “contributed largely to the Church, and had done much in other ways to spread the gospel.”

John Callahan of the Hadley Hall Rescue Mission said that “360,000 wanderers from the Bowery had received dinners at the expense of Mr. Huyler and Mr. Bowne in the last six years and that the men of the Bowery deeply felt the loss of both philanthropists.”

“A corned beef sandwich is the bait used on the gospel hook for catching sinners on the Bowery,” said Callahan. “That gospel hook was baited many years by Mr. Huyler and Mr. Bowne.”

Another joint memorial service was held that same night at the Jerry McAuley Mission.

Bowne’s estate amounted to more than $2 million, much of which went to charity.  At the time of his death the house on West 57th Street was valued at $150,000 – about $3.5 million today.  Nettie Bowne stayed on in the house for a while, donating $50,000 to the city of Poughkeepsie the following year for a tuberculosis hospital in memory of her husband.

While she retained ownership of the property, she eventually moved to St. Augustine, Florida where she died in February 1930.

While nearly all of the magnificent mansions on the block were demolished to make way for tall office and retail buildings, No. 35 remained.  Converted for business purposes it  became home to firms like Jewett, Newman & Co and Finch Telecommunications Laboratories and somehow escaped destruction.


Today the lower two stories have been obliterated, replaced by a modern glass-fronted restaurant.  Where Louise Schieffelin’s maids poured tea from a silver service, tourists pause for a Bud Lite.  But above, little of the façade has changed.  There the magnificent French townhouse remains; an ornate relic whose story has been forgotten.

non-credited photographs taken by the author
Posted by Tom Miller at 2:41 AM