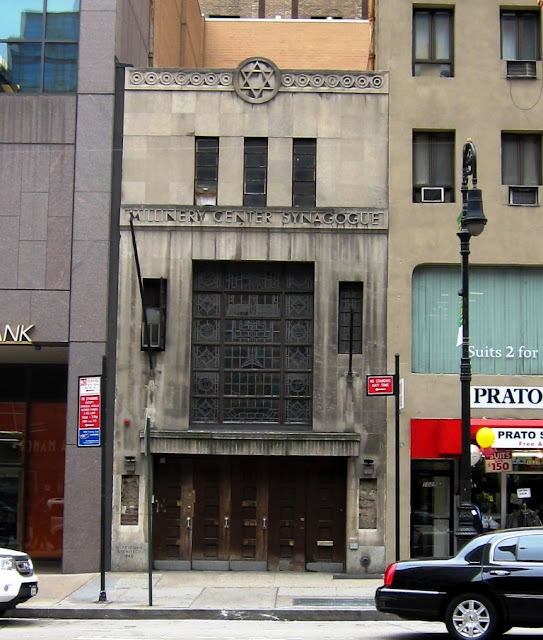 At the turn of the last century, the millinery trade was centered in the Broadway and Houston Street neighborhood.  But already it was slowly moving northward.  By the time World War I had ended, the millinery district had followed the migration of the apparel industry into the new Garment District.
Men’s and women’s wholesale hat manufacturers and related industries—trims, feathers, ribbons, etc.—were centered in a five-block area.  Between 5th and 6th Avenues, from 35th Street to 40th, were upwards of 600 hat firms with 15,000 employees; many of which were hard-working Jewish immigrants.
As the firms moved in, small houses and commercial buildings were replaced by factories and office space.  In the years between 1905 and 1930 more than two dozen multistory buildings went up.  Here workers toiled with felt and straw, ribbons and rhinestones, creating the hats that would keep America in fashion.
Religiously observant Jewish workers in the Millinery Center immediately faced a problem: living in Brooklyn or, in some cases, as far away as Long Island, they needed a local synagogue for daily minyan – prayer services – or for the prayers for the dead recited during the week.
In 1935 the Millinery Center Synagogue was founded to address this problem.  By now fully two-thirds of the hat makers in the United States were centered within the small Manhattan district.    The congregation made do, worshiping in a second-floor Millinery District loft for a decade.
But despite the Great Depression and the shortage of building materials after World War II, the determined congregation managed to raise $150,000 for the erection of its own building.  Then on October 7, 1945, the announcement was made that the property at 1025 6th Avenue had been purchased as the site of an actual synagogue building.   The New York Times reported that “H. I. Feldman, architect, has been commissioned to prepare plans and supervise construction” of the three-story structure.
Feldman had begun his practice in 1921 and by now had almost single-handedly designed the Grand Concourse in the Bronx which was lined with his stunning Art Deco style apartment buildings.   By the time Feldman died in 1981 he had designed 2,500 apartment houses in the New York area.  The little synagogue on 6th Avenue would be a unique commission.
The resulting synagogue, completed in 1948 was a somewhat severe Modernist design.  Faced in limestone, it boasted little exterior decoration—a centered magen david at the roofline, a frieze announcing the name of the synagogue in sleek mid-century lettering at the third floor, and a large rectangular stained glass window over the wide entrance doors.
Suddenly the small congregation had a building to be proud of—and even air conditioning.   The main floor of the temple would seat 128 worshipers and space was provided for social activities as well.  Here such groups as the Millinery Bowling League, the Millinery Salesman Union, the Millinery Textile Club and retailers convened.
As the Millinery Center Synagogue was being completed, Joseph Guttman, a Czechoslovakian concentration camp survivor, was arriving in New York.    The young man--the sole surviving member of his family--brought with him a knowledge of the Jewish liturgy and a remarkable voice.


Guttman became cantor of the synagogue; a position he would hold for nearly four decades.  Reportedly it was here that he instructed two other young cantors the High Holiday liturgy.  Those young men would go on to fame outside their synagogues as the opera stars Richard Tucker and Jan Peerce.
Tucker reported the problems he had in reconciling his duties as a cantor with the demands of his profession.  Jewish groups were routinely offended by his singing at the Metropolitan Opera on Friday evenings or holy days. 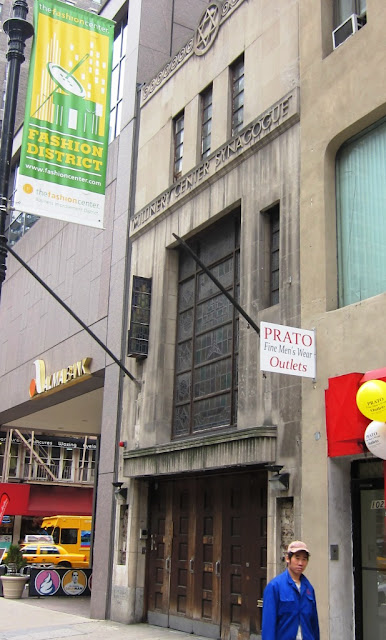 Over half a century later the impressive little synagogue remains a mainstay for Jewish workers in the Garment District.  Its crisp Modernist façade sits in stark contrast with its dingy Victorian neighbors and serves as reminder of the rich cultural heritage of the area.

Many thanks to Keith Taillon for suggesting this post.  Non-credited photographs taken by the author.
Posted by Tom Miller at 2:44 AM