The 200-Year Old Grocery Store at No. 329 Bleecker Street 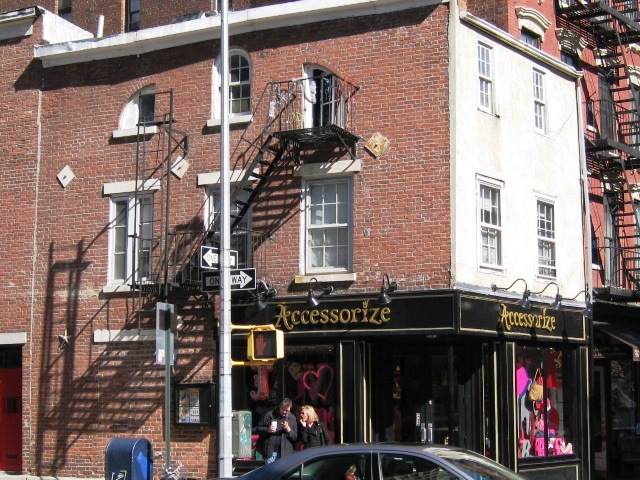 Thirty years after the Revolutionary War the tiny village of Greenwich was sparsely populated.  It would be two decades before the outbreaks of cholera and yellow fever in the crowded city to the south forced New Yorkers to seek refuge here.  An old road, renamed Christopher Street in 1799, ran along the southern boundary of Vice Admiral Sir Peter Warren’s country estate and here, around 1802, a two-and-a-half story wood fronted building was erected.
A similar house sat next door at the corner of Herring Road.  In March 1807 a three-member commission composed of Gouveneur Morris, surveyor Simeon De Sitt and attorney John Rutherfurd, was appointed to plot a comprehensive street plan for Manhattan–decades before most citizens could imagine the city engulfing the island.  The three men met in the tiny corner structure.
Civil engineer John Randel, Jr., advised the commission and years later he reminisced about the village at that time.  “In going from the city to our office in 1808 and 1809, I generally crossed a ditch cut through Lispenard’s salt meadow, now a culvert under Canal Street, on a plank laid across it.  From this place I followed a well beaten path leading to the then village of Greenwich, passing over open and partly fenced lots and fields, not at that time under cultivation, and remote from any dwelling house, now remembered by me, except Col. Aaron Burr’s former country seat on elevated ground called Richmond Hill and was then occupied as a place of refreshment for gentlemen taking a drive from the city.”
Randel mentioned another country estate.  “I continued along this path to a branch diverging from it to the east south of Manetta water, now Minetta Street, which path I followed to Herring Street passing on my way there, from about two hundred to two hundred and fifth yards west, the country residence of Col. Richard Varick, called Tusculum, the site of which is now Varick Place on Sullivan Street between Bleecker and Houston Street.”
At the time there were only about three other homes along Herring Street–later renamed Bleecker Street–in one of which Thomas Paine boarded.
The glint of historical importance for the little corner building was over in 1809 when the commissioners finalized their visionary street plan which would be published two years later.  Things returned to normal on the corner of Christopher and Herring Streets.
Until 1828.
By now Greenwich Village was experiencing a building boom as Federal-style brick homes and businesses filled the streets.  Herring Street was widened that year, taking away the corner building and the wall that had separated it from its neighbor at 93 Christopher Street.
No. 93 got a new brick exterior side wall.  Flanking the central, arched window below the cornice were two quarter-round windows, mimicking those that would be found below a traditional Federal-style pitched roof fashionable at the time.  When Herring Street was renamed the following year, the corner property got a new address as well:  329 Bleecker Street.
David McAllister and John N. Moore ran their small dry goods store, McAllister & Moore, until the partnership encountered problems.  On February 1, 1843 the New York Daily Tribune announced that the business was “dissolved by mutual consent.”


Richard Barrick lived here in 1871, and most likely ran his business here.  The man had a bad day on October 6 when he got into what The New York Times called “an affray” with John Cunningham on West 10th Street near Bleecker.   The newspaper reported that Cunningham “thrust the end of a rake-handle into the eye of Richard Barrick…and destroyed it.”
At the turn of the century Nicola M. La Rocca ran his fruit stand from here and for nearly a century the corner store would continue as a grocery.
In 1922 Sam Ribyat, president of Ribyat Brothers, owned the store.  He commissioned architect Thomas Williams to do renovations.  Subsequent photographs show no cosmetic improvements of the Christopher Street façade; so it was probably at this time that the supporting tie rods on the Bleecker Street elevation, with their decorative iron star-shaped masonry supports, were installed.
At some point the Christopher Street front was raised to a full three stories and the decrepit clapboards were stuccoed over.  For decades the Bleecker Street Grocery's metal sign “FANCY FRUITS DAIRY” was a familiar landmark for Villagers.
But as trendy shops and restaurants invaded the quiet, twisting streets of Greenwich Village so did high rents.  The corner grocery was replaced by a rapid-fire succession of business—among them Bronca Pizza, Goodfellas Kitchen and Bleecker’s Corner, a fast-food deli.
Today the 200-year old store is sand-blasted and manicured; home to the UK-based chain store, Accessorize that sells glittery jewelry, belts, hair pieces, bags and cosmetics—far removed from the humble structure that sat on a dirt road in the first decade of the 1800s.

non-credited photograph taken by the author
Posted by Tom Miller at 3:10 AM