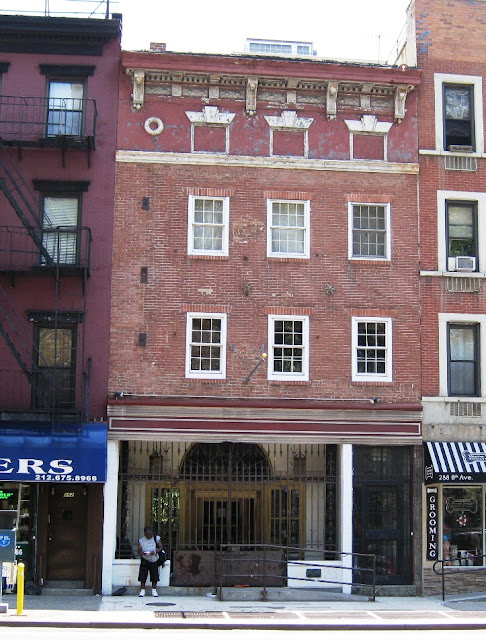 When exactly the broad red brick Federal style building at No. 290 8th Avenue was converted to accommodate a store or saloon on the first floor is uncertain; however the unassuming building had been there since around 1845.

After the Civil War, in 1868, just two blocks to the south at 23rd Street and 8th Avenue stood the Grand Opera House; anchoring the growing entertainment district that stretched to Fifth Avenue and Madison Square Park.  It was a vibrant, bustling neighborhood.

Painter John H. Schmitt was living next door at No. 292 on July 12, 1871 when Irish Protestants, known as the “Orangemen,” began a parade from their headquarters called Lamartine Hall on 8th Avenue and 29th Street. The parade celebrated the anniversary of the victory of King William II, the Prince of Orange, over James II at the Battle of Boyne. The cause for celebration was not shared by New York’s Irish Catholics.

Approximately 5000 National Guardsman and 1500 policemen accompanied the marchers; but 8th Avenue around 23rd Street filled with hundreds of Catholics. Bricks and rocks were hurled at the marchers. The militia responded with gunfire and the police charged the mob with their batons.


The New York Sun interviewed Schmitt and reported “that just previous to the firing by the troops, he saw a man with a red moustache” who fired a gun from atop an awning at 290 8th Avenue.

Before it was over 60 civilians and three National Guardsmen were dead. Nearly two dozen policemen were injured, four of whom were shot, and about 150 others were wounded.

By 1886, when the Alaska Club held its meetings here, a fourth floor had been added.  Where, most likely, three dormers had stood, were squat windows with prominent keystone lentils under a Victorian cornice. The building had been extended a few feet to the north where a passageway once separated it from No. 292 (where John Schmitt had lived), throwing it visually off balance.

When Police Captain Schultz took over he 20th Street station house in 1891, No. 290 was home to Herman’s Concert Saloon. The proprietor, named McLaughlin, ran a gambling house here.  Schultz not only allowed the illegal club to operate, he openly joined in.

A Senate group called the Lexow Investigating Committee, was formed to look into corruption, including Schultz’s indiscretions. An employee of McLaughlin testified that the proprietor “ran a ‘faro bank.’ It was a ‘brace’ game. He also ran a red-and-black game, a roulette wheel, and a ‘sweat’ game.”

When asked whether Captain Schultz was aware of the illegal activities he said the captain “was brought in and introduced all around. He asked all hands to take a drink. He was a nice, social fellow, and spent money freely.”

Schultz's troubles had come about when he went on vacation in 1893 and left Sergeant Coffey in charge as Acting Captain. Coffey discovered the gambling operation and ordered it shut down. All the equipment was moved next door to No. 292 in secret where it continued to operate.

Captain Schultz no doubt regretted his decision to put Coffey in charge as he sat in the senate hearing room.

Although the gambling house moved on, the saloon stayed in business and was run by Otto Ahrendt until 1898.

Then there were changes made.

Miss May Agnew leased the building from Fannie Crawford and opened The Eighth Avenue Mission. She was soon joined in her work by the English-born Sarah Wray. The Mission was nondenominational and was open 365 days a year for a gospel service, preceded by an open air meeting.

The indefatigable women also ran a Sunday School every Sunday. The 1912 Directory of Social and Health Agencies of New York City added that “A trained nurse ministers to the sick poor. Workers visit the homes relieving cases of distress and caring for the temporal and spiritual need of the neighborhood.”

On November 17, 1947, almost half a century later, Sarah Wray finally retired from the Mission which, despite being totally dependent on private donations, was still firmly ensconced at No. 290 8th Avenue.

After the Mission moved out, the building suffered a period of neglect before briefly being home to “Rome,” a gay bar. Then in 2003 the one-time saloon and Christian Mission experienced an astonishing make-over.

As the vintage Biltmore Hotel near Grand Central Terminal was being demolished, interiors were salvaged and some were installed here. Passing through great wrought iron gates outside, the patron found himself surrounded by marble panels, bronze ornamentation and Versailles-type mirrors.

Now called The Biltmore Room it was a high-end, high-priced restaurant run by Chef Gary Robins.

By 2009 the space was taken over by Danny Kane who converted it to a dual-purpose venue – an upscale restaurant during dinner hours transforming into a nightclub late at night.

The ambitious project did not last, however, and the chunky little off-center building with its rich and intriguing history sits vacant behind its ornate entrance gates.
Posted by Tom Miller at 3:03 AM