A Marble Palazzo for a Piano Store -- No. 433 Fifth Avenue 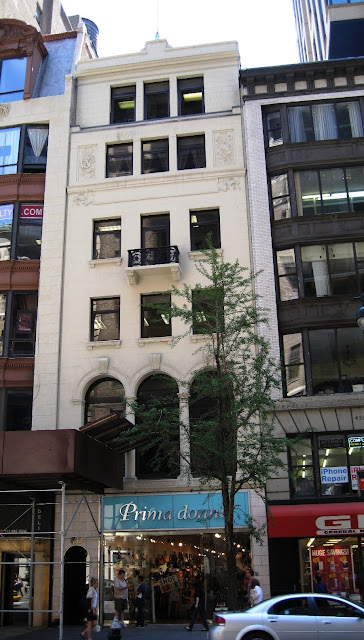 Although the millionaire Theron Butler had died in his brownstone mansion at 433 Fifth Avenue in 1886, the house was still referred to as the Theron Butler house 24 years later.

By 1910, when the former president – now known popularly as Colonel Roosevelt – returned from his sweeping European tour, the days were numbered for the staid old home. On June 13 the piano manufacturer Hardman, Peck & Co., signed a 21-year lease for the property from the Butler Estate on which to build its new showroom and offices; agreeing to rent ranging from $17,000 to $23,000 a year.

Six days later the Roosevelt family borrowed the mansion from Mrs. Alexander from which to view the massive parade welcoming “Colonel Roosevelt” home. The Roosevelts lunched, surrounded by Butler’s art collection including works by Corot, Millet, Bonheur and Rousseau, then watched the parade pass under the windows.

“Few of the crowd seemed to realize that they had an opportunity of seeing the Roosevelt family at Mrs. Alexander’s house, 433 Fifth Avenue. Yet there, balancing himself on the edge of some board sloping to the sidewalk, was Quentin Roosevelt. In the centre window Mrs. Roosevelt, Mrs. Alexander, and Miss Alexander sat and chatted, while behind them glimpses could be obtained of a tall young man, who was identified as Theodore Roosevelt, Jr.” reported The New York Times.

“Miss Alexander” was Eleanor Butler Alexander, Theron Butler's granddaughter. Before long she would be the wife of young Theodore Roosevelt, Jr.

The next month plans were filed for the Hardman, Peck & Co., building. They called for “a six-story building of brick and stone, fitted with stores and showrooms.” The estimated cost of the structure was $50,000.

Before long the Theron R. Butler mansion was no more.

At the second floor, Jacobs placed a triple-arched arcade that gave the façade depth and shadow. By placing the main cornice above the fifth floor, rather than atop the sixth, he downplayed the top floor and visually lowered the building’s height. Bas reliefs of musical instruments flanked the three windows below the cornice. A charming juliette balcony gave dimension at the fourth floor, over which the firm’s name was announced in a long panel.


The Record deemed it “one of the most exquisitely graceful buildings ever dedicated to a commercial use,” and said that of all the Italianate structures on Fifth Avenue this was “the most charming.”


Inside the Hardman, Peck pianos were displayed in a setting similar to a Fifth Avenue mansion. A graceful winding staircase curved up the rear wall beneath an arched stained glass window. Grand archways embellished with molded plaster separated show areas.
﻿
Hardman pianos rivaled Steinways and the firm enjoyed not only the patronage of the Metropolitan Opera Company and the famed tenor Enrico Caruso, but it was the chosen piano for the White House during the Franklin Delano Roosevelt term of office.

After more than a half-century in their building, Hardman, Peck & Co., moved to their new location at 33 West 57th Street in 1934. The bronze letters on the façade were removed, to be replaced with VIRIBUS UNITIS at some point thereafter. The reason for the Austrian imperial motto to appear on the building (which is loosely translated as “with united forces”) is unclear.

In March 1958 Bill Meyer-Fifth Avenue, Inc. bought the building for a home furnishings retail store and wholesale showrooms.  But by the end of the century, the once-elegant piano showrooms were used as a discount merchandise store.  Hulking air conditioning ducts clung to the ornamented plaster ceilings and inexpensive backpacks were piled on the sill of the stained glass window.

Although the retail space is now used as an apparel store, the interior is still badly neglected.  Outside, the elegant marble palazzo has changed little.  The fifth floor cornice and balcony have been lost, the Austrian motto has been removed and the graceful arcade has been glassed in to maximize floor space inside.  Yet No. 433 remains an elegant fixture on midtown 5th Avenue.

non-credited photographs taken by the author
Posted by Tom Miller at 4:16 AM