The Charming Houses at Nos. 4 through 10 Grove Street

The row of four Federal-style houses on the slightly-bending Grove Street, between Hudson and Bedford Streets, is perhaps the most astonishing architectural time-capsule in Manhattan.

In 1714 Queen Anne bestowed to Trinity Church land stretching along the Hudson River from Duane Street north to what would become Christopher Street in the Village of Greenwich. Called Trinity Church Farm, the rural land would eventually become highly valuable real estate.

James N. Wells was among New York City’s earliest real estate developers. It would be Wells who was responsible for much of the development of Clement Moore’s family estate, Chelsea, north of Greenwich Village. But in 1825 he was concerned with church-owned property on the gently winding Grove Street. 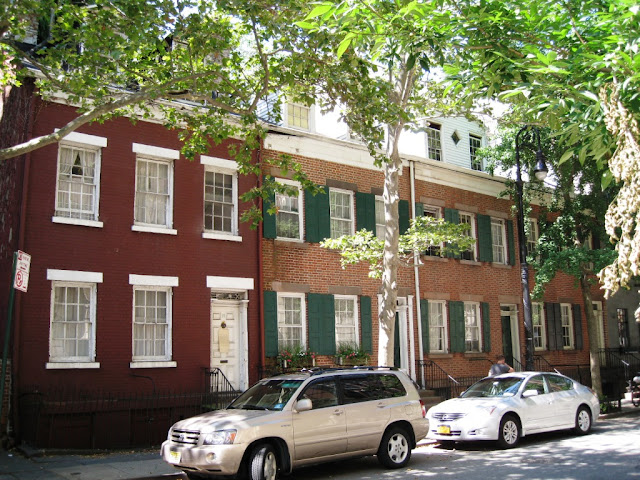 Wells built five matching working-class houses here from 1825 to 1834. The clapboard houses were faced in Flemish bond red brick. Like most of the Federal period buildings in Greenwich Village, these were designed by the builder, using the popular style-books of the time. The relatively few trained architects of the period, like John McComb, were busy with grand downtown edifices like City Hall.
The result was a row of modest but charming residences, 18 to 21 feet wide. Nearly two centuries later the AIA Guide to New York City would comment on the copybook origins of this row saying “In translation, the detailing is less pretentious, adapting to the needs of American merchant and craftsman clients; nonetheless there is a faint, pleasant echo of London’s Bloomsbury.”

Paired dormers caped by classic pediments pierced the roofs and delicate wrought iron railings graced the English basements and stoops.
The little houses were leased to families with moderate incomes throughout the 19th century. At some point mid-century, No. 2 was replaced with a larger, Victorian row house.
John H. Matthews, an advertising agent for the Chicago, Burlington and Quincy Railroad was living in No. 4 in 1893. The 55-year old Matthews enjoyed a drink, it seems, for on the morning of July 9 of that year he was already inebriated when he ordered a whiskey in a saloon at 39 Desbrosses Street. As the bartender turned to pour the drink, Matthews fell off his bar stool and fractured his skull.

It was around the same time that Trinity came under attack for the living conditions of its tenement buildings on Church Farm. An 1894 the Department of Buildings and the Board of Health conducted an investigation of Trinity’s properties – including the houses on Grove Street. Saying that the church’s tenements and houses “are unhealthful and that the death rate in them is high,” The New York Times reported “That Trinity’s houses are dilapidated and unsafe in many instances…is now officially confirmed by the investigation which has been and is now being carried on by the Department of Buildings.”

Yet the Grove Street houses passed the inspection fairly well, the only violation being “The metallic leader in front is not connected by a pipe or pipes with the sewer.”

Nevertheless, the unwanted expense and notoriety resulting from the investigation caused Trinity to rethink its holdings. In 1909 Rector William Manning swore to improve the situation and a Vestry study recommended that the residential buildings be torn down and replaced by large, commercial structures. Gradually the church began to divest itself of residential properties.

The Grove Street houses got their turn in June of 1920. Trinity sold a parcel to the syndicate Alentaur Realty Company which included the charismatic Grove Court – a hidden group of six houses tucked behind a wrought iron gate behind Grove Street – and the five three-story houses from No. 2 to 10 Grove Street.

The sale rescued the Grove Street group from demolition and commercial development. Alentaur Realty was interested in creating a “home colony” for artists and literary workers in Grove Court as well as remodeling the Grove Street houses as private homes. The firm had purchased, about a year earlier, six vintage houses on St. Luke’s Place that it successfully renovated and re-sold – an astoundingly early example of respect for historic structures and restoration.

Today the charming row is among the most authentic Federal-style groupings in the country. The dormers of No. 6 have been altered long ago; but on the whole the buildings remain untouched. The little group exemplifies the charm attributed to Greenwich Village.

uncredited photographs taken by the author
Posted by Tom Miller at 3:49 AM