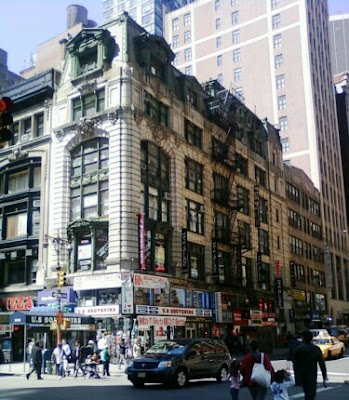 Two years after the end of the Civil War, Jacob Michaelis and Caesar Kaskel opened clothing store, Michaelis & Kaskel, on Bond Street and Broadway.  Catering to the carriage trade, the firm produced its own high-quality custom-made apparel.

In 1881 the Michaelis & Kaskel moved to 20 West 23rd Street in the fashionable shopping district where they plied their business for four years before it was reorganized as Kaskel & Kaskel.  Now operated by brothers Albert and Max Kaskel, it sold only high-end menswear.

By the turn of the century Kaskel & Kaskel Co. was one of New York’s leading haberdasheries, providing shirts for the city’s wealthiest gentlemen, including the President of the United States. In 1902 the firm commissioned architect Charles L. Berg to design a new headquarters and retail space at 316 Fifth Avenue at the southwest corner of 32nd Street, just south of the Waldorf-Astoria hotel.
﻿﻿
The neighborhood had changed from one of Victorian mansions to a mix of residential and exclusive retail buildings. In keeping with the area, Berg created a white marble Beaux Arts palace. Two great arched openings spanned three floors on the Fifth Avenue and easternmost 32nd Street sides. A stone cornice supported by ornate brackets separated the rusticated piers below and the sixth story and above, a massive copper-trimmed mansard roof erupted bold copper dormers.

Above the two arches, large marble cartouches were emblazoned with carved K’s. The impressive structure was not to be overlooked and shouted the firm’s high-class status.
The 1902 issue of The Electrical World and Engineer magazine was impressed with Kaskel & Kaskel’s forward-thinking use of electric lighting in its show windows. The writer complimented the firm on using artificial lighting to illuminate the windows at night to attract customers – an innovative marketing tool at the time.

﻿
Although Kaskel & Kaskel catered mainly to the masculine customer – arguing in one advertisement that “bright silks and satins are not for the fair sex alone – they accommodated female customers as well. The New York Times, in reporting on the opening of the Fall line early in the century called the company “the arbiters of fashion in haberdashery, not only for the male sex, but also for their feminine imitators, as fully one-half of the customers there were ladies.”


An often-repeated gag was that upon being introduced to President Theodore Roosevelt, Max Kaskel proudly announced, “I made your shirts.”

Staunchly following the traditional and conservative rules of men’s attire, Kaskel & Kaskel maintained its well-bred customer base by ignoring fashion trends. In 1905, the Kaskels were interviewed by a reporter for Men’s Wear, a newspaper for apparel retailers, concerning a new trend in colored collars. The company position was clear: “We don’t want colored collars, as they would be a nuisance, either attached or detached. We will never try to encourage the sale of them, and, should people ask for them, which is not likely, we will discourage them.”

In 1915 as commercial concerns moved further northward on Fifth Avenue, Kaskel opened a second store at 535 Fifth Avenue between 44th and 45th Streets. Six years later, in March of 1922 the firm consolidated the stores into a single location at Fifth Avenue and 46th Street, occupying 5,200 square feet of floor space.

The days of elegance and style for No. 316 Fifth Avenue were over.


Throughout the 20th Century the white marble palace where Astors and Vanderbilts shopped for shirts became home to tawdry shops hawking souvenirs and electronics. The stone cornice beneath the mansard roof was stripped off and grime and rust stained the façade.

The AIA Guide to New York City summed up the condition of the once-proud building. “Crusty old Beaux Arts, in the process of being devoured by its crummy commercial occupants. But a copper-clad mansard roof keeps a hat on what is deteriorating at street level.”