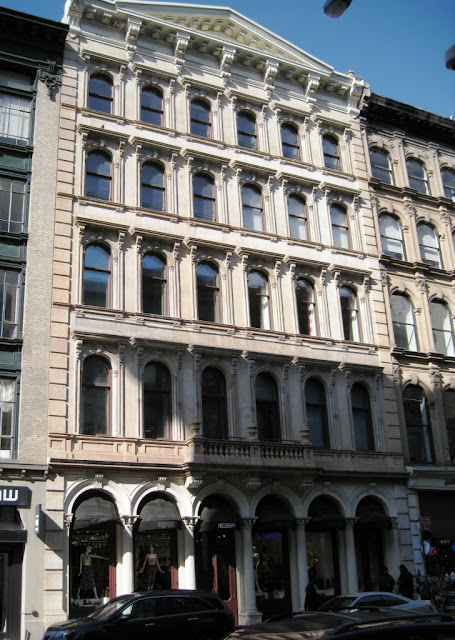 When merchant Nicholas Ludlum purchased the property on Broadway between Grand and Howard Streets in 1841, the neighborhood was still mostly residential. Within twenty years the sophisticated commercial buildings appearing on Canal Street, one block to the south, would begin replacing the old homes here as well.

In 1860 Ludlum commissioned architect Griffith Thomas to design an office building and store. Thomas, who had just completed the Astor Library a year earlier, would be deemed “the most fashionable architect of his generation” by the American Institute of Architects years later in 1908.

The result was a stone, Italianate beauty topped by a deep pediment; a style that would be copied in cast iron throughout the area for decades. In his “Access New York City,” Richard Saul Wurman wrote “In a neighborhood of iron buildings pretending to be stone, this five-story building…is the real thing, and it’s a real beauty…”

Gerald R. Wolfe, in his 1994 “New York, A Guide to the Metropolis,” agreed. “No. 443-445 gives a very aesthetic appearance. Rows of pleasing round-arch windows are topped by individual projecting cornice slabs supported by brackets. A projecting balustrade runs along the second floor, with decorative urns at each end. Ornate scrolled brackets support the main cornice, above which a pediment adds the final touch.”

Three years after completion, the business and editorial offices of D. Appleton & Co. moved in. The firm had published Darwin’s Origin of the Species in London in 1857 and would go on to print the memoirs of William Tecumseh Sherman and William H. Seward.

It was the demand for the latter types of publications after the Civil War and the subsequent need for more space that pressed Appleton & Co. to leave 443-445 Broadway after only three years.
For many years around the turn of the century, Einstein, Wolff & Co. leased the entire building. The firm dealt in “fancy lace wearing apparel” and the “embroidery trade,” importing and manufacturing laces and embroideries and holding the controlling interest in several other manufacturers of handkerchiefs, neckwear, laces and embroideries.

Einstein, Wolff & Co. moved out in February 1913 leaving the building vacant. In June of that year the heirs of Nicholas Ludlum sold the property for $260,000 after 72 years of ownership. The New York Times reported that “Plans are being prepared for remodeling the present structure.”

Indeed the old pre-Civil War building was updated and in 1918 an ad was placed announcing that the commercial space on the street level was for rent with all the latest amenities. “Store and basement 50x200 through to Mercer Street. All glass front, large private elevator—sprinkler system—heat furnished. Modern and most desirable store in this section.”

The Broadway-Canal neighborhood changed drastically as the 20th Century progressed and prestigious retail stores and offices were replaced by warehouses and cheap discount outlets. No. 443-445 managed to survive intact above street level although the ground floor was heavily altered and modernized.

As the Canal Street / SoHo district continues to experience its revitalization, No. 443-445 Broadway was recently restored. The street level once again looks as it did in 1860 and the upper floors have been renovated into condominiums.

non-credited photographs taken by the author
Posted by Tom Miller at 2:34 AM