The idea of hotels and apartment houses expressly for bachelors gained a foothold in New York in the 1880s. As the prospect of employment in the post-Civil War city lured men from the farms and small towns, respectable lodging was necessary.  “Bachelor flats” filled the void.

A decade later, a similar problem was recognized for working females. Women in the 1890’s were no longer tied to the home or to traditional jobs as maids or nurses. Suddenly the city was filled with opportunities as stenographers, clerks, “typewriters,” and teachers. Women flocked to New York hoping for success.

The problem they faced was affordable, respectable housing until they could establish themselves.

In 1889 the situation was brought to the attention of Margaret Louisa Vanderbilt Shepard, the daughter of William Vanderbilt and a fervent supporter of the Y.W.C.A. In response, she donated the funds for the Margaret Louisa Home for Protestant Women; an inexpensive, “home-like” residence where self-supporting women could stay while they searched for work or saved for their own lodgings.

Robert Henderson Robertson was commissioned to design the structure which was completed in 1891. The brawny stone building gave an essence of unintimidating solidity. A century later the AIA Guide to New York would call it “Rock-face brownstone (with some interspersed brick) in Romanesque Revival, with a charming colonnade at the top floor.”

When the hotel opened in June of 1891 it was lauded by The New York Times as “an inspiring evidence of woman’s interest in women.” The six-story facility had 78 sleeping rooms, a restaurant, and common areas where the women could socialize and relax.

“Mrs. Shepard provided everything, from the artistic vases upon the handsome upright piano in the reception room to the new-styled soap dish that can be fastened on to the scrubbing pail,” said The Times.

The rooms were furnished with a white-painted iron bedstead, a “stylish little oak table,” a rocker, and washstand with toilet set. While the rooms had up-to-the-minute touches like an electric light, there was also a gas jet and a candle in each room in case of the expected power failures.

Margaret Louisa Shepard supported the home for the first month of operation to ensure its financial stability. Her stipulation was that it “should not be conducted as a charity, but as a businesslike transient Protestant women’s hotel.” An in-house employment bureau helped those women searching for jobs.

The Margaret Louisa Home did not accept every woman who rapped on the door and there were rules to be followed. Each prospective roomer had to provide references. Household help were not permitted. “If servants seek admittance,” said The Times, “they are sent where they will feel more at home with associates who do the same work as themselves.” Women who were found to have “forfeited their right to enter respectable homes,” were sent elsewhere. Although the doors were locked at 10 pm, pre-arrangements could be made in special circumstances to allow the guest late night access.

Boarders were allowed to stay four weeks, with the possibility of 5 extra days “grace” being added.

Immediately the home was a success. By the Fall applicants were being turned away and 400 women were having lunch in the restaurant daily (where the menu noted “Children are Not Admitted”). Rooms were rented at 60 cents a day with an extra 85 cents for three meals.

In 1898 The Times gave a breakdown of the professions represented at the Margaret Louisa Home. “Notwithstanding all that has been said concerning the number of women who are taking up so-called unfeminine employment, it would seem from the list of the Margaret Louisa’s guests that they are in the minority,” the paper said.

1,954 of the guests the previous year were teachers, 630 were milliners, 436 dressmakers, and 171 were “housekeepers.” “Travelers” accounted for 449 of the guests, 246 were stenographers, 70 physicians, 39 librarians, 15 lecturers, 37 missionaries, 11 actresses, and 98 nurses. Various other professions included photographers, umbrella makers, confectioners, hair curlers florists, hatters and merchants.

Not everyone agreed with the idea of “self-supporting” women. That same year Dr. Charles Cuthbert Hall, President of the Faculty of the Union Theological Seminary addressed the board of the YWCA deploring the “increasing migration of young women from the village to the city.”

“Here come these hordes of bright young women to seek success in art,” he said, “led on by the iridescent dream that they will accomplish something great in a great city.”

By providing the girls with an easy source of housing through the Margaret Louisa Home, Dr. Hall complained that “you have not said to them: ‘Go back to your homes, you are wrong,’ but you have met them in a cordial and no superficial way.”

“What a pity that these girls are infected with the idea that to be married and to settle down in a small village is below them!” he lamented.

The girls continued to stream in, however. In 1900 The Times described the working girls earning $6 and $7 a week who could afford very little for housing.  The Margaret Louisa Home offered hope to those who would find little elsewhere.  “These are the girls who work in the flower and feather factories and are employed in the shirt-waist shops.” On the whole, the newspaper said, “The girl who can pay but a small sum for her board can get but a very unsatisfactory return for her money in New York.”

As World War I came to a close, the Margaret Louisa Home was still charging only 60 cents a night and the facility remained operating throughout the first half of the 20th Century. 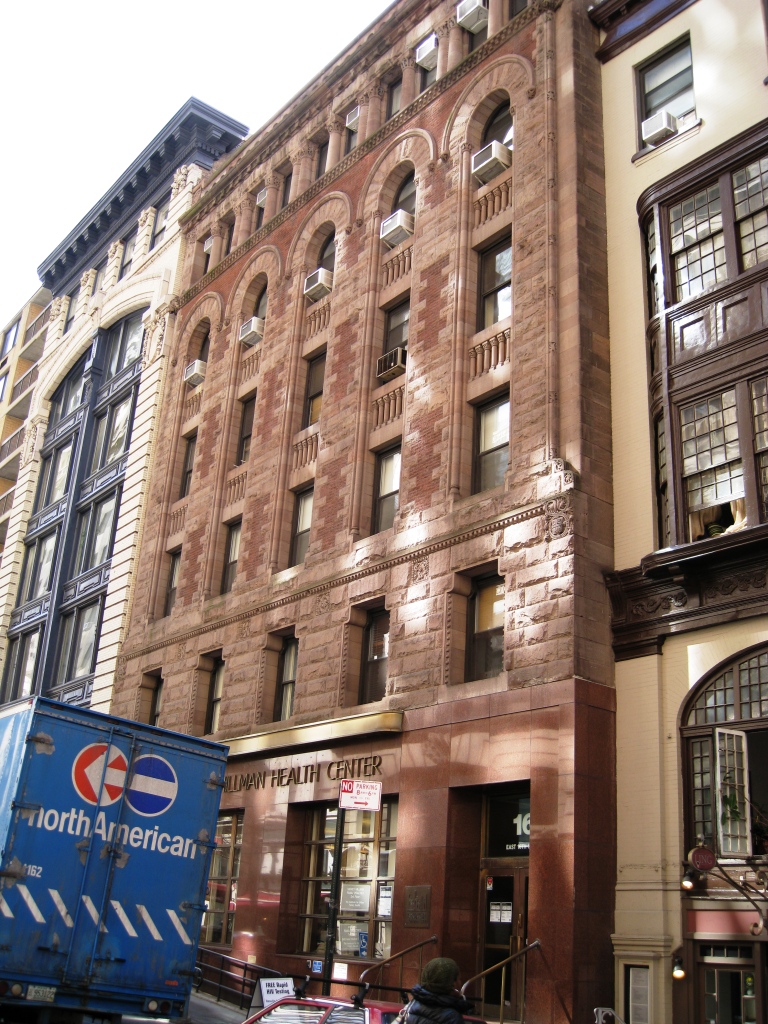 Today the ground floor of the building is home to the Sidney Hillman Health Center while the New York University-run New York City Free Clinic operates on the upper floors. While the bulk of the exterior remains remarkably unaltered, the entire first floor has been obliterated, replaced by an sleek and unsympathetic pseudo-modern façade.