The Asch Building and the March 25, 1911 Triangle Waist Company Tragedy

Early on the morning of Saturday, March 25, 1911 Mary Herman pulled on her coat, shut the door behind her, and started off to work at the Triangle Waist Factory near Washington Square. Mary would not return home that evening.

The building to which Mary headed was the Asch Building, completed in January 1901. Built by furrier Joseph J. Asch with Ole Olsen, it was intended to be the latest in fire-proof design with an iron and steel framework clad in non-combustible terra-cotta. At only 135 feet high, fire laws allowed wooden floors and window frames. Although sprinklers were not required by law, plans did call for a fire alarm system, fire hoses on all floors, two staircases per floor and an iron fire escape clinging to the exterior wall of the light court.

Further fire precautions were added by the Buildings Department which rejected the initial plans, calling for an additional set of fire stairs and complaining that the rear fire escape “must lead to something more substantial than a skylight.”

The architect, John Woolley, however, argued against the additional staircase. Because the floors were all open, being loft manufacturing spaces, and the planned stairs were far from each other, he reasoned that the exterior fire escape counted as a third staircase. The Building Department accepted his argument.

The finished loft building was attractive in ecru-colored brick and terra-cotta. Designed in the latest Renaissance Revival style, it was embellished with ornate terra-cotta panels and wreaths. The tenth floor stood out with a series of arched windows lining up beneath a deeply-overhanging cornice.

The Triangle Waist Company – often referred to as the Triangle Shirtwaist Company – set up its factory in the top three floors of the Asch Building at Nos. 23-29 Washington Place. Here, aside from the offices on the 10th Floor, young women mostly in their teens and early 20s bent their backs over sewing machines constructing shirtwaist blouses – the high-necked, tailored garments which were the height of fashion.

The girls were poorly paid, conditions were miserable and work was hard. When the International Ladies Garment Workers Union struck in 1909, Triangle retaliated by firing 150 sympathizers. From then on owners Max Blanck and Isaac Harris locked the girls in, kept the light court windows shuttered and ruled the sewing floor by fear. Sewing girls told of raising their eyes from their machines only when they were certain they would not be caught. Speaking was forbidden and restroom breaks were closely monitored. The women were all searched upon leaving the building at quiting time.  Anyone wishing to work for Blanck and Harris was required to provide her own needles and thread.

Mary Herman was working on the 9th Floor that Saturday. The girls would all be going home in ten minutes – at 4:45 pm. There was unspoken relief in the room.

Meanwhile, downstairs on the 8th Floor a pile of fabric somehow caught fire on a table. Paper patterns hanging above quickly ignited and the blaze grew. When a floor manager rushed to the fire hose in the hall, the rotten hose crumbled. The bookkeeper, Mary Loventhal, called the offices on the top floor and warned of the fire. No one thought to notify the 9th Floor where Mary Herman was working.

Most of the panicked women on the 8th Floor rushed to the elevator and stairs and escaped; however others, unable to make it to the stairs or wedge into the crowded elevators jumped to their deaths.
With the bookkeeper’s alarm from the 8th Floor, those on the top floor dashed to the stairways and all but one survived.

Meanwhile, on the 9th Floor business went on as usual. When the closing bell clanged the girls accepted their pay envelopes and headed for the coatroom. Suddenly the fire reached the floor. As the room filled with smoke, panicked girls fell over tables and machinery. As workers crammed into the stairways, a barrel of machine oil near one set of stairs suddenly exploded, blocking that exit. Mary Herman was seen rushing to a door which, to her terror, was locked.

Lillian Wilner fought with the iron shutters on a light court window, finally prying it open and desperate women packed onto the 17-inch wide iron fire escape. To their utter dismay the drop ladder at the bottom had never been installed and they were trapped on the metal escape.

As more and more women crammed onto the fire escape their combined weight and the heat of the fire caused it to collapse. The workers plunged to the pavement of the light court.
As other women were jammed into the slowly-descending elevators, workers jumped into the elevator shafts, landing on top of the cabs. Others tried to slide down the elevator cables.

The Fire Department arrived but, according to The New York Times, the fire engines had difficulty getting near the building due to the number of bodies scattered about the sidewalk and street. “While more bodies crashed down among them they worked with desperation to run their ladders into position and spread their fire nets,” reported the newspaper.

Life nets broke apart with the force of bodies falling from the upper stories and when the fire ladders were extended, they were too short to reach the floors where victims were trapped. Police Captain Dominick Henry recalled “a scene I hope I never see again. Dozens of girls were hanging from the ledges. Others, their dresses on fire, were leaping from the windows.”

It was all over within 30 minutes. Mary Herman never went home that evening. Neither did 145 other shirtwaist workers. A wave of horror accompanied the story as it swept across the nation, fostering the beginnings of strengthened fire codes, better work conditions and stronger labor unions.

Days later most of the bodies were still unidentified, burned or disfigured beyond recognition. Finally on March 31, Mayor Gaynor decided that the city would bury the final 14 unidentified victims in a lot in Evergreen Cemetery in East New York.  Five days later over 80,000 mourners filed up Fifth Avenue in a procession sponsored by the WTUL and Local 25 for the unknown victims. Hundreds of thousands of workers walked away from their jobs that afternoon to view the procession.

Blanck and Harris were indicted for manslaughter in the death of Mary Herman on April 11 for locking the factory door in violation of New York State labor laws. The jury, however, found that proving the owners knew about the locked door was impossible and the pair was acquitted. Blanck and Harris received $200,000 from their insurance claim for fire damages. Twenty-three families each received a $75 settlement from Joseph J. Asch for the lost lives. 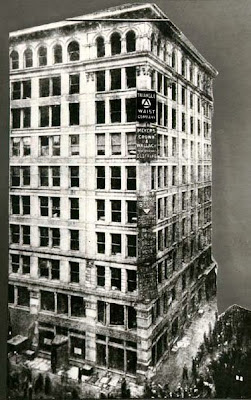 Despite the overwhelming tragedy and loss of life, the Asch Building was actually little-damaged. The terra-cotta cladding and iron and steel framework withstood the heat and flames as the designer intended. Joseph Asch had architects Maynicke & Franke correct logistical defects including adding a new fire escape, removing the iron shutters, and constructing two large water tanks on the roof. In 1912 a modern sprinkler system was installed. After the restoration and renovations it was renamed the Greenwich Building and continued its use as a manufacturing loft.

New York University rented the 8th floor, where the fire had started, in 1915. A year later plans were announced to install the library and classrooms here. In 1918 the school took over the 9th floor and a year later expanded to the 10th – now inhabiting the three floors formerly home to the Triangle Waist Company.

By the 1920s the university had taken over the entire building. German-born philanthropist Frederick Brown purchased the structure and, on February 28, 1929, signed it over to New York University. The school renamed the building The Brown Building.

Every year, on March 25, firefighters, city officials, union leaders and fashion industry employees hold a ceremony at the Brown Building to commemorate the tragedy of March 25, 1911. A fire ladder is hoisted to the sixth floor – the extent that the ladders reached that day, too short to help those dying above – and a fire bell tolls once for each of the 146 lives lost.
Posted by Tom Miller at 2:48 AM