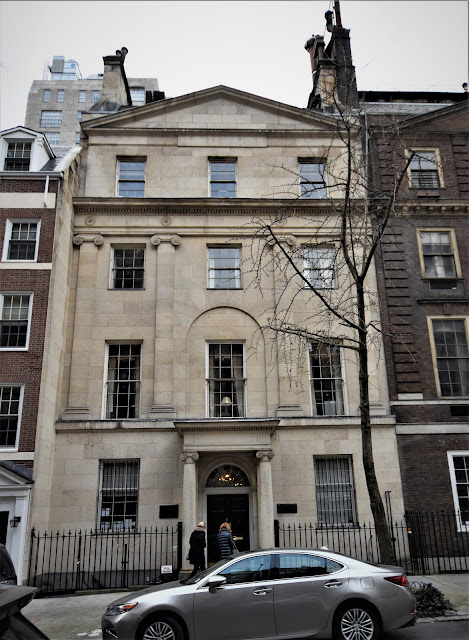 Vincent Astor was just 20 years old in 1912 when the Titanic sunk. On board was Astor’s father, John Jacob Astor and his new wife, Madeleine, who was younger than Vincent. Through tragedy the young Harvard student became one of the richest men in the world, inheriting an estimated $200 million.


Two years later Astor married Helen Dinsmore Huntington and, after serving in the Navy during World War I, began planning a permanent home. Curiosities were perhaps raised when the millionaire began buying up properties on East 80th and 79th Streets, between Park and Lexington Avenues.  The neighborhood, which had been middle-class in the 19th century, was still struggling to be fashionable.

On January 8, 1926 The New York Times noted that “The private residence at 127 East Seventy-ninth Street, between Park and Lexington Avenues, has been purchased by Vincent Astor, it was learned yesterday, and will be added to the plot he has assembled at this point for improvement with a new residence for his own occupancy.”  The “plot he had assembled” included the home of Mrs. Louis W. Noel at No. 130 East 80th Street.

Within the year Astor had commissioned the highly-esteemed architect Mott B. Schmidt to design the new mansion on the site of the demolished Noel residence. Schmidt had established a reputation for working in 18th century styles.  Now, giving a nod to Robert Adam’s elegant 1774 Society of Arts building in London, Schmidt designed a restrained neo-Classic residence constructed of imported Roche limestone, completed in 1928.

Helen Astor was a staunch supporter of the musical arts and entertained often in the mansion, hosting charity teas for the Philharmonic and, in October 1938, giving a gala reception for Arturo Toscanini before he left New York for Europe.

With the Astors came other wealthy neighbors as three Georgian-style brick mansions abutted No. 130. Comparing the Astor mansion to these homes decades later, the AIA Guide to New York City said it was the “most subtle and most powerful of the 80th Street Quartet. Here brick Georgian gives way to travertine Regency. Taut Ionic pilasters, and an elegant relieving arch in the manner of the Brothers Adam. Schmidt was a winner.”

Helen and Vincent Astor divorced in 1940. Before long Astor married Mary Benedict Cushing, best known as Minnie. Within two years he broke Astor tradition–after a century and a half of the family's accumulating property, Vincent began selling it. Among the properties he liquidated was the mansion at No. 130 East 80th Street.

In 1943 Mrs. Bertha Rainey Plum purchased the house, living here just four years. Then in 1947 it was acquired by the Junior League of New York City. By 1949 the house was ready for their move. The Times reported on May 24 of that year, “The Junior League of the City of New York once more is dwelling in marble halls…after ‘roughing it’ for nearly a year in a storage warehouse.” 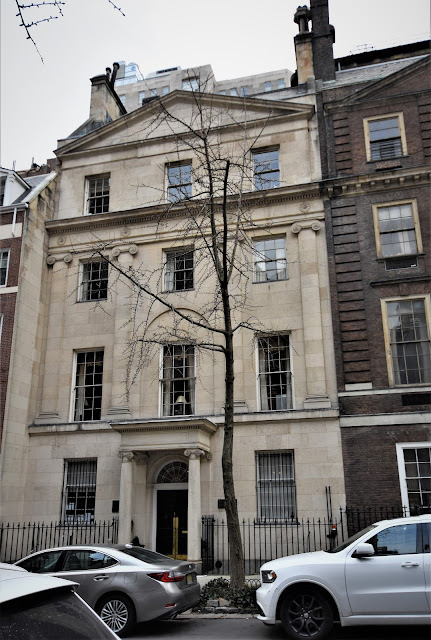 The League, whose purpose according to its Mission Statement is “exclusively educational and charitable,” remains in Vincent Astor’s exceptional mansion, preserving its integrity on a block of exceptional residences.