Abraham Van Nest, president of the Greenwich Savings Bank, purchased "Greenwich," the former country mansion of British vice-admiral Peter Warren in 1821.  By then the once-sprawling grounds had been reduced to a city block, bounded by Charles, Hammond (later Bleecker), West 4th and Amos Street.  As Greenwich Village grew up around it, the mansion and its grounds survived until shortly after Van Nest's death in 1864.

Charles Christopher Amos had inherited the portion of the Peter Warren estate directly to the south of the mansion, which he portioned into building plots.  He named three of the streets on his property after himself: Charles, Christopher and Amos (later West 10th) Streets.   But he gave a nod to Abraham Van Nest by christening the north side of one block of Charles Street, between Bleecker and West 4th Street, Van Nest Place.  It was not uncommon at the time to give short sections of streets separate names, implying their upscale status.  It resulted in three blocks of East 8th Street becoming St. Mark's Place, for instance.

Because only the north side of the block was Van Nest Place, the addresses were sequential,  Wealthy brewer Walter W. Price purchased the lots at Nos. 4, 5 and 6 Van Nest Place.  He commissioned architect Gage Inslee to design the middle house, and almost assuredly the nearly identical flanking houses as well.

Completed in 1866, the houses were three bays wide and three stories tall above brownstone-fronted English basements.  No. 5, like its neighbors, was faced in red brick and trimmed in stone.  The elevated financial position of its intended occupants was reflected in the heavy Italianate ironwork of the stoop and areaway, the double-doored entrance and its especially attractive stone enframement. 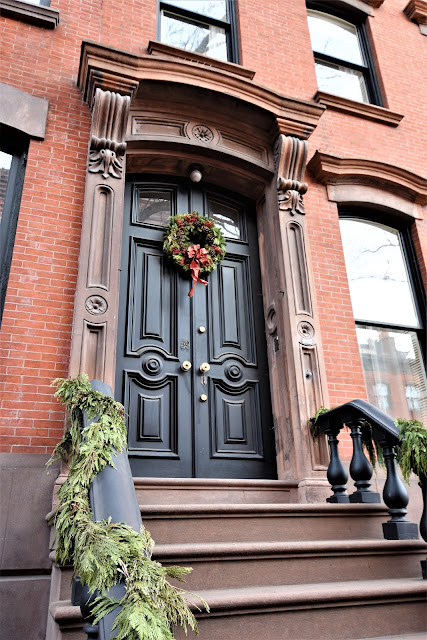 Price  had come to America in 1840, and in 1860 partnered with Ebenezer Beadelston in the brewing firm of Beadleston & Price on West 10th Street.  Two important events occurred in Price's life just weeks apart in 1865.  On July 1 he married Constance Bridge Tallon, and on July 26, with the retirement of Beadelston, the brewery was reorganized.  Ernest G. W. Woerz became vice-president and Price's new partner.  The firm was renamed Beadelston, Price & Woerz.

It is unclear whether Price and his new bride moved into No. 5 Van Nest Place.  The couple would soon have two children, but there would be significant problems in their domestic tranquility.  On April 23, 1839, the year before Price arrived in New York, he had married Susanna Butler in England.  He neglected to inform Constance of the marriage nor did he move to divorce Susanna.

But, although Constance left him in 1871, things worked out well enough.  The courts annulled the first marriage in 1874, deciding that Price had assumed his first wife dead, and declared the couple's two children legitimate.

By then No. 5 Van Nest Place had been home for several years to Price's partner.  Price sold it to Ernest G. W. Woerz in 1869.  Born in Stuttgart, Germany in 1835, he had come to the United States while still a young man and, like Price, had immediately gone into the brewing business.   His significant wealth by now was evidenced by his memberships in the Larchmont Yacht Club in Westchester County and the Seabright Yacht Club in New Jersey.

On the night of October 22, 1879, the Weorz house and the John Loughlin house nearby had intruders.  Two days later The New York Times reported "On Wednesday night burglars, with a patent 'jack,' broke the bars from he rear basement windows of No. 62 Perry-street and Nos. 3 and 5 Van Nest-place."  The rear yards of the Perry Street and Van Nest Place houses were back-to-back.

Having broken into Nos 3 and 5 Van Nest Place, the burglars were inside the Perry Street house when the next door neighbor heard them.  He rushed to the street and found a policeman.  One of the armed thieves was captured.  "Mr. E. G. W. Woertz, of No. 5 Van Nest-place, lost a few articles of clothing," reported The Times.  The family seems to have gotten off lightly, considering the silverware and other valuable items missing from the other houses.

John H. Seaman and his wife, Matilda, next owned the house.  He was the principal in the John H. Seaman Co., dealers in "masons' building materials."  The couple sold it on February 10, 1887 to John Henry Gerdes and his wife, the former Anna Catherine Tienken.   Property values had increased on the affluent block.  The $16,000 price tag would translate to about $425,000 today.  As was common, the title was put in Anna's name.

A German immigrant, Gerdes was a liquor concessionaire--providing refreshments in several taverns throughout the city.   He also dealt in real estate.  At the time of the purchase the couple had three children, 13-year old Emma, 10-year old Henry Theodore, and 8-year old Theodore Richard Nicholas.

As the century drew to a close, the boys attended the Stevens Institute of Technology.  Both were graduated in 1902 and embarked on rather remarkable careers.  In 1905 Henry was an inspector in the mechanical engineer's office of the New York Central Railroad, and Theodore was an inspector of electric subways for the Interborough Rapid Transit Co.

The ambitious young men went on to other endeavors.  In 1906 Henry and his father incorporated the Ross Steam Specialty Company with other two other investors.  John took on the position of president.  And by 1911 Henry was a director in the Manhattan High Powered Motor Co., as well.

While the men of the family were tied up with business projects, Anna and Emma enjoyed a more relaxed lifestyle.  On September 6, 1906 The New York Times noted "Mrs. John H. Gerdes and Miss Gerdes of New York City have arrived at the Montanesco [in Mount Pocono], where they will occupy suites during the Autumn weeks."

Spring was the season of love for neighborhood cats in 1912, a situation that disturbed Theodore's peace.  He wrote to the Society for the Prevention of Cruelty to Animals, to the State Board of Charities and, according to him, "several other unsympathetic organizations," asking them to do something about the nighttime yowling.  When he got no satisfaction, he wrote to the mayor, William Jay Gaynor.

The mayor, too, was unsympathetic.  His letter of March 8, 1912 dripped with sarcasm:

I regret to say that I have so many official duties pressing upon me that I cannot just now devote any time to the tomcats.  There are a few in my neighborhood, but I go to sleep and let them howl.  It amuses them and doesn't hurt me.  But some say that it is the pussycats that howl, and not the tomcats.  How is that?  We must not kill tommy for the sins of pussy.  And, also, let us remember that the '"female of the species is more deadly than the male."

The noisy cat episode notwithstanding, Theodore and his brother were well respected in the engineering and business communities.  In 1914 they formed Gerdes & Company with their father.  The firm was described as "engineering, realty, metal products."  And Theodore headed his own company, Theodore R. N. Gerdes, M. E., designing and manufacturing ventilation equipment.  He held patents for inventions like the Gerdes Air Moistener, the Gerdes Electric Window Ventilator and the Gerdes Roof Ventilator.

On August 17, 1918 Theodore was married to Harriet Brady, the daughter of the late Dr. John Alexander Brady and his wife, the former Olive White Richardson.  Although his brother had moved to Brooklyn following his own wedding, Theodore brought his bride back to the Van Nest Place house.

The title to No. 5 was passed to the unmarried Emma.  At the time property owners on the block were beginning to question the advisability of keeping the Victorian name.  On May 6, 1928 The New York Times reported "Residents of that little-known thoroughfare in the heart of Greenwich Village, designated on the city map as Van Nest Place, feel that the time has come to abandon that name as has been done in the past with many other names of small and once select localities."  A petition had been drawn up to rename the block; but it would be years before change came.  Finally, in 1936 the Gerdes house was renumbered 59 Charles Street.

The 20th century did not infiltrate the world inside the mid-19th century residence.  Although her brothers were successful engineers, the only concession to modernity within the house was the conversion from gas to electric lighting.  In 1923 Anna had replaced the wallpaper on the stairwell.  It was the last updating that would take place during a Gerdes residency.

Emma lived on alone in the house--Henry died in 1948 and Theodore in 1953.  Along with the house she had inherited her father's real estate holdings.  The New York Times reported, for instance, on June 1, 1961, that "After an ownership of forty-three years, Emma C. Gerdes has sold the four-story store and apartment building at 542 Third Avenue."

Having lived in her Victorian time capsule for 92 years, Emma died on October 6, 1966.  Her funeral was held in St. John's Lutheran Church on Christopher Street.

The Charles Street house was sold the following spring.  Gordon F. McClure and his wife bought a page torn from 1866.  On April 23, 1967 The New York Times reported "The house is virtually the same as it was when Miss Gerdes was a little girl."  The article described the zinc-lined bathtub in the only bathroom and noted "The bedrooms are still equipped with cabinet-enclosed washstands that had running water."

"All the rooms have marble-mantled fireplaces and these are especially elaborate in the parlor and adjoining library in the rear.  Large, gilt-framed mirrors are placed over the parlor and library fireplaces, and a floor-to-ceiling pier glass between the parlor's two front windows supports a heavily carved gilt cornice."  From the frescoed parlor ceiling hung the original gilded chandelier with frosted glass globes.

The McClures anticipated making obvious updates, including new plumbing and electricity and installing central heating and air conditioning.  An additional bathroom was installed (and the zinc tub replaced) and the kitchen modernized.  Nevertheless, the cast iron stove was kept, "if only to look at."  The couple assured they would make "as few changes as possible." 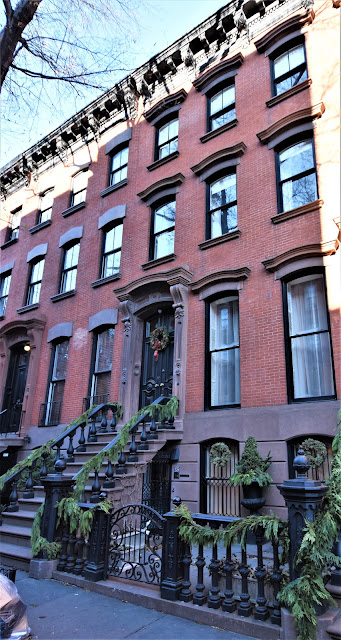