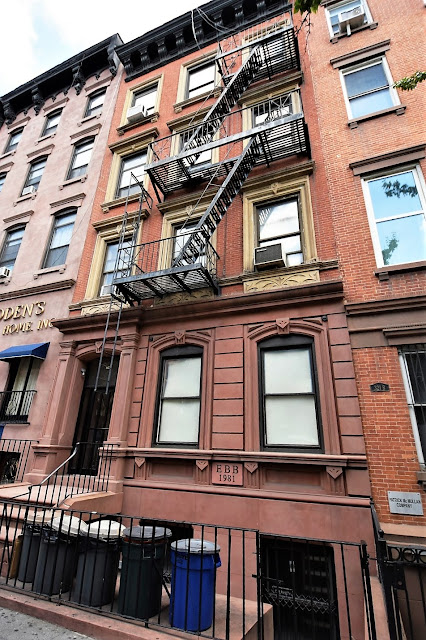 By the 1850s residential development reached the district just north of Greenwich Village.  West 14th Street, between Eighth and Ninth Avenue saw the rise of handsome brick or brownstone faced Italianate-style mansions.  The posh tenor of the block was evidenced by the several homes of members of the wealthy Havemeyer family.

It is possible that No. 201 West 14th Street, however, was being leased as an upscale boarding house from the start.  In the mid-1850's it was operated by an unmarried woman whose brother, the Rev. Samuel D. Ferguson, died on December 30, 1855.  The following day The New York Times reported that his funeral services would be held "at the residence of his sister, Miss A. Ferguson, No. 201 West 14th-st."

In February 1856 an advertisement in The New York Herald offered the lease for sale "The furniture and good will of a select boarding house, pleasantly located in West Fourteenth street.  Rent is low, advantages considered; and a full complement of boarders at present in the home."

Well-to-do New Yorkers divided their time between summer resorts and winter residences.  Keenly aware of this, when the new proprietor of No. 201 advertised that "a gentleman and wife, or two single gentlemen, an be accommodated with full or partial board" in October 1859, he added "Those wishing to make permanent arrangements for the winter will find it a desirable opportunity."

Among the boarders at the time were Stephen Caruana, his wife Almira, and their six-year old daughter, Orade Elena.  Life in a boarding house was intimate.  Everyone gathered at the dining room table twice a day, for breakfast and dinner, and often became a sort of extended family.  And so it was not surprising that when little Orade died on April 17, 1860, her funeral was held in the parlor here.

Another child's funeral was held in the house the following year.  The baby of Francis A. and Emma F. Husted had been alive only briefly when it died on October 8, 1861.  The infant's funeral was held here two days later.  And tragically, after five-and-a-half-year old Jennie Brower Francis died of membranous croup just a year later, on December 5, her funeral, too, was held in the house.

In the spring of 1862 the house got an interior make-over.  S. & J. Bogart held an auction on April 22 of all the household furnishings.  The auction announcement provided a hint at the luxurious accommodations the boarders enjoyed.  Among the "genteel" items were mahogany sofas, lounges, mirrors, tapestry, Brussells, three ply and ingrain carpets, damask and lace curtains, paintings, engravings, mahogany French and cottage bedsteads, and mahogany washstands.

The best of boarding houses leased suites to only a handful of residents.  The fact was stressed in an advertisement in The New York Herald on September 20, 1862.  Available in the newly-furnished house was "an entire spacious Parlor Floor, consisting of four Rooms, handsomely furnished, to let, with Board, to a family or a party of gentlemen, where there are but a few other boarders of the first respectability."

Among those respectable boarders in 1865 was M. Louise Geer.  The unmarried woman taught in the primary department of Public School No. 47 on East 12th Street.

New York City organized the mish-mash of addresses in 1868, resulting in the house's new address of No. 323 West 14th Street.  Interestingly, while many commodious private homes in Chelsea were converted to rooming or boarding houses in the second half of the 19th century, No. 323 became a private residence.  It became home to Eugene Mehl, the highly-paid chef of the Windsor Hotel on Fifth Avenue, and his wife Gertrude.  European-trained chefs were in great demand in exclusive hotels and demanded enormous salaries--the means by which to purchase fine homes like this one.

Mehl was both accomplished and fastidious in the kitchen.  On December 1, 1879 he made his opinions clear concerning the use of copper utensils.  When a reporter visited the Windsor kitchen, he was told “Dirt is poisonous wherever it is and copper is deadly if you put any acid in it or let anything stand in it after it stops boiling.  I remember twenty-five years ago some people died after eating oysters at the Metropolitan [Hotel].  It was all laid on the oysters and nobody found out what the poison was or where it came from, but we knew in the kitchen.  It was copper."

Eugene Mehl was offered the position of managing the Hotel Lafayette in Lake Minnetonka, Minnesota in the spring of 1882.  The resort hotel could accommodate 1,000 guests and the opportunity was apparently one Mehl could hardly refuse.  The St. Paul Daily Globe reported on May 28 that he had arrived in that city “en route to his new charge."

While Mehl’s son, Eugene, Jr. left New York to assist his father as Assistant Manager of the new hotel, it would appear that Gertrude may have stayed back.   A month before the men departed, Mehl transferred title to the house to Octavus B. Libby on April 1.  That same day Libby transferred the title to Gertrude Mehl for a “nominal” charge.

By 1887 the house was home to another chef and restaurateur, Leonard Gosling and his wife.  The elderly couple, who were married in Amsterdam in 1818, had had 15 children.  Forced to leave Paris in 1829 “because of an expression of opinion antagonistic to Louis Philippe,” according to a newspaper, Gosling arrived in New York in 1830.

The New York Times later related “At that time there were no cheap restaurants in the city, and he established one in the old church building at 64 and 66 Nassau-street.  The place jumped at once into popular favor, and the proprietor made money fast.”

Gosling sent a boy to a nearby oyster stall.  The pleased customer returned the next day. And again for several more days.  Finally he called Leonard Gosling to his table and said “You have very fine oysters, but I wish you would change the shells occasionally.”

It was most likely Gosling who gave the house a facelift.  While the Italianate cornice was left intact, the windows were given sandstone frames with modern neo-Grec incised decorations, and the brownstone-fronted parlor level received a makeover in the style. 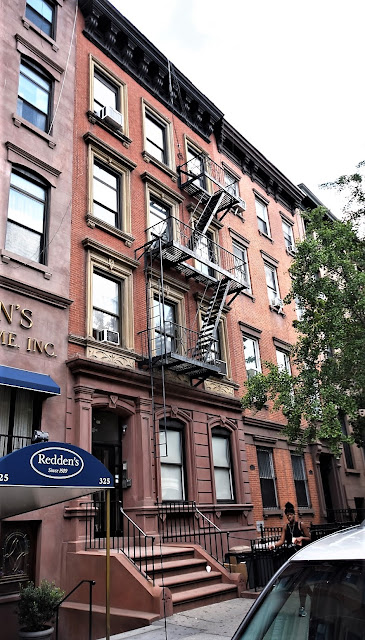 In February 1887 Gosling’s wife died in the 14th Street house at the age of 85.  He died there nine months later at the age of 93.  The New York Times noted “His death was due to old age, although he was a very vigorous man for his years.”  His funeral was held in the residence on the morning of November 20, 1887.

The house would see at least three more families before the turn of the century.  Nationally-known organist and music publisher Augustin Cortada and his wife were here in 1889; men's furnishings merchant Max D. Brill (partner with his Maurice Brill in Brill Brothers) lived here in 1893; and by 1896 D. Morrison, Jr. and his wife were in the house.  By the time Mrs. Morrison donated material “for making skirts” to the Binghamton State Hospital for the Insane that year, the end of the line for No. 323 as a private home was nearing.

In 1901 the property was advertised at auction as a “brick and brownstone trimmed single flat.”  The description revealed that the house had already been converted to apartments, just one per floor.  Its tenants were still professional, like Dr. William P. Cunningham who lived here at least from 1914 through 1919.  He was the attending dermatologist to the Misericordia Hospital and provided medical articles to publications like the Medical Council.  In February 1917 that journal published his article “A Calm Survey of the Cancer Scare.”

The building was purchased in October 1920 by Vincent X. McGuire.  The new owner’s extended family moved in.  His mother, Mrs. H. McGuire still lived here in 1928.  The funeral of her son-in-law, Edward P. Mullen was held in her apartment on Thursday, September 6 that year.  Mullen had been married to Helen P. McGuire, already deceased.  Also living in the building at the time was Mullen’s widowed mother, Hanna Mullen.  Other tenants that year included William A. Stephenson, a supervisor for the New York Telephone Company.

When No. 323 was sold to an investor in April 1940, the broker announced that it “is to be remodeled.”  The subsequent renovation, completed the following year, resulted in three apartments per floor. When E.B.B. Realty took over the structure in 1981 it added the innocuous if mysterious brownstone plaque “EBB 1981” to the façade. 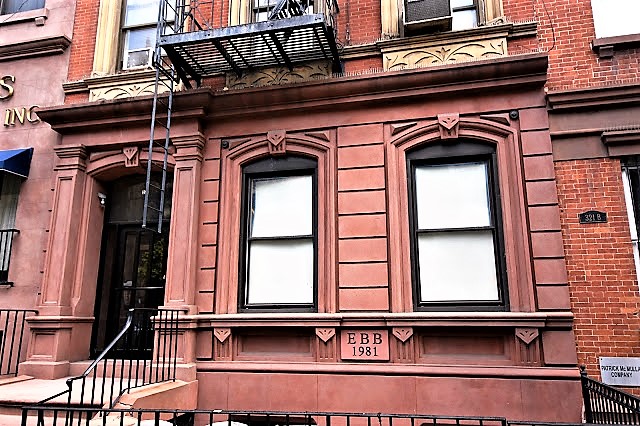 The former house survives as a reminder of a much different West 14th Street, when stylish carriages waited for wealthy Victorian ladies and gentlemen on the quiet residential street.