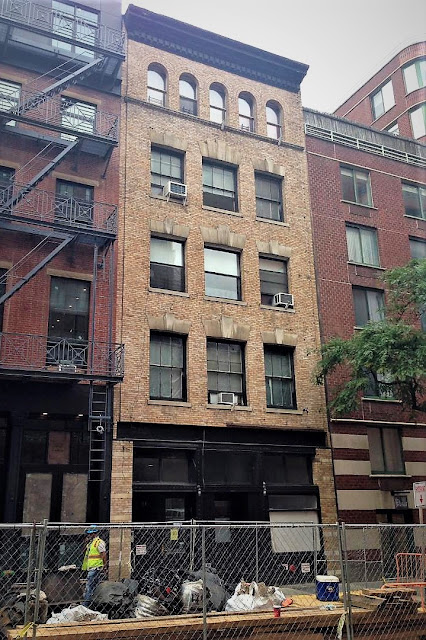 J. M. Atwater leased the property at No. 83 Warren Street from Grace Church.  The building he erected on the site housed his extensive business of jellies, sauces, catsups, canned goods, and other grocery items "wherewith the epicurean palate is so deliciously tickled," according to Illustrated New York, in 1888.   The writer mentioned that "The store, No. 83 Warren Street, is in one of the most desirable locations down town."

In March 1894, 34 years after opening his business, Atwater sold the leasehold to the property to Hampton O. Marsh for $5,000.  Marsh, who lived in Morristown, New Jersey, immediately initiated plans to replace the old Atwater building.  His architect, W. G. Beatty, filed plans in May, calling for a five-story brick and limestone loft building to cost $13,000--about $382,000 today.   Beatty included a hand-powered sidewalk freight elevator and electric lighting in the plans.

Hampton O. Marsh would never see his building completed.  He died of a heart attack in his home on September 22 that year at the age of 63.  His estate forged ahead with the plans.

The building was completed by the end of the year.  An industrial blend of Romanesque Revival and Renaissance Revival styles, it was faced in variegated Roman brick and trimmed in limestone.  The no-nonsense cast iron storefront had none of the grandiose Corinthian capitals and other decorations of a generation earlier.   Brawny splayed lintels with prominent keystones adorned the openings of the second through fourth floors.  A row of five arched openings sat upon a delicately-carved stone cornice at the fifth.

The new building was leased to candy manufacturer Holmes-Brumley & Company.  The factory's boilers required a smoke stack, so W. G. Beatty was called back in January 1895 to make the alterations, which cost the Marsh estate a little over $7,500 by today's standards.

In February 1897 the estate sold the leasehold to Benjamin Sire for $5,400.   He would soon have to find a new occupant of his building.   On March 26 The Sun reported that Holmes-Brumley & Company was in financial trouble and Robert W. Bullock had been appointed its receiver.

The candy company had debts amounting to nearly half a million in today's dollars.  Bullock, who was just 28 years old and "bears a good reputation," according to The New York Times, had been a bookkeeper in the company.  He now took on the responsibility of settling the affairs of the firm; a psychological burden which may have been more than he could handle.

The first week of July Bullock complained to friends of a headaches and said he thought he would go away for a few weeks to rest.  That was the last anyone heard from him.  On July 16 The Times reported "Some alarm is felt by creditors of Holmes, Brumley & Co...Mr. Bullock has been missing for more than two weeks, and as a result the settlement of the affairs of the company is blocked."  The article was quick to assure "no one suspects that the young man has absconded...They fear, however, that he has either met with foul play or is seriously ill and unable to communicate with his friends."

Bullock had already sold off the perishable stock of the firm, and had arranged for an auction of the company's equipment and furnishings.  The auction went on without him; but the buyer of the company's safe encountered a problem when it was revealed that only Bullock had the combination.  A representative of the safe factory was called to open it.  Everything inside was in order--checks made payable to Bullock as receiver, and some cash.  The mystery of Bullock's whereabouts only deepened.

On July 17 the New-York Tribune proposed "It may be possible that Bullock, while laboring under some mental stress, has wandered away, and does not know what he is about or what he is doing.  He was an extremely nervous man, and was under the care of several nerve specialists."  Oddly enough, the newspapers lost interest in the case after the company's finances were settled.  None seems to have followed up on the story of the missing man and his fate.

The former candy factory became home to a drastically different tenant.  Robert A. Keasbey was a manufacturer and dealer in industrial supplies, including railroad and ship parts.  The firm was, for instance, among the top bidders in 1898 for supplies for the New York Navy Yard.  And it was the Robert A. Keasbey company which supplied the asbestos coverings for pipes in the two torpedo boats being built for the U.S. Navy in Elizabethport, New Jersey in 1903.

In September that year Marcus Stowe Hill took a job earning $15 a week as a clerk.  His had been an ambitious but sadly disappointing career to date and the new job was a distinct step down.  He had met his wife, Alberta, in Sidney, Australia and they were married on December 1, 1888.  By now they had two children.

At one point Hill had moved his family to San Francisco, where he was a commission merchant.  But he devised a scheme to make a fortune making Egyptian and Turkish cigarettes.  He convinced three friends to invest $7,500 and relocated the family to Japan where the cost of living was lower.  In 1901 he returned to America and hired an engineer to make a special cigarette-making machine.  But it never worked.

And so to make ends meet he accepted the job of clerk.  After having worked at Robert A. Kesbey just three weeks, Hill was no doubt humiliated when police entered the building and arrested him for non-support.  Alberta, willing to wait no longer for her husband, had arrived in New York with the children and gone directly to the police.

Hill pleaded with the judge "I asked her not to come here, as it costs much more to live here than in Japan.  She has $500 worth of diamonds and I hardly have a collar button."  Alberta produced her husband's landlady as a witness, but, according to The Sun on October 3, 1903, "her evidence was all in favor of the defendant."

Irene Kenney testified "He boarded for $6 a week because he wanted to save money to get back to his family, of whom he appeared very fond."  Alberta's suit fell flat.  "The Magistrate dismissed the complaint when Hill said that he would do the best he could by his wife," explained The Sun.

Not long after the messy affair, the Robert A. Keasbey company moved to North Moore Street.  Three butter and egg firms took its place at No. 83 Warren Street.  The first was the Consumers' Butter and Egg Co., which had been organized at Greenwich and Reade Streets in 1902.  Two years later, according to The Sun, "a fire drove it to 83 Warren Street."

The blaze came at an especially bad time.  Consumers' Butter and Egg Co. was already burdened with debts that amounted to $15,000 (about $426,000 today), according to the New York Produce Review on March 9, 1904.  Unable to survive, the journal reported that the firm would close its doors.

On May 4, 1904 the New York Produce Review and American Creamery reported that after 27 years at No. 81 Warren Street, J. D. Stout & Co. had moved next door to No. 83.  "The object of moving was to get a more modern building and a better equipment for the handing of butter, cheese, and eggs, which have been the specialties of the firm every since its organization," the journal explained.


A separate article on the same day noted that De Wolff & Christiansen "have moved from 15 Harrison street down to 83 Warren street."  Both butter, cheese and egg firms remained here only until about 1913, when a far different tenant moved in.

The James Goldmark Co. was the New York agent for Holtzer-Cabot Electric Co., based in Boston.  Its extensive list of products included buffers and polishers, time clocks, motors and dynamos, fire extinguishers, and soldering compound.

Following World War I No. 83 became home to the New York branch of Chicago-based John F. Jelke Co., makers of oleomargarine.  The firm was looking for an ambitious young employee in the summer of 1920.  "Boy Wanted--Strong, willing, for stock room and shipping department; steady employment, $14 a week."  It would be a lucrative job for someone, the weekly pay equal to about $185 today.

The following year a salesman was needed.  The firm's advertisement in The New York Herald on April 24, 1921 sought someone with "good record and high class references" to sell "popular food in Bronx and Brooklyn."  The candidate would have to "driving experience."  The ad concluded "If you are a business producer with ability and character, call early Monday morning, John F. Jelke Co., 83 Warren St."

The Warren Street block saw a wave of employment agencies take over buildings beginning in the early 1940's.   The Employment Agency Center Building opened at No. 80 in 1942, housing more than 40 agencies; and the same year the Edwards Employment Agencies, Inc, purchased No. 73 Warren Street.  That deal prompted The New York Times on May 19 to call it part of "the recent movement of many similar enterprises from Sixth Avenue."

On November 17, 1947 The Times reported that the trend had reached No. 83.  "Roberts Employment Service, 83 Warren Street, a new organization specializing in male and female positions in the mechanical, technical and building trades, has been formed by Edward Greenberg."

Employment services would give way to residential space by the mid-1970's (although not legally converted).  Unlike so many Tribeca lofts which were taken over by artists, No. 83 became noted for its musical residents.  According to Mike Katz and Crispin Kott in their 2018 Rock and Roll Explorer Guide to New York City, "Dubbed the 'Home for Teenage Dirt,' 83 Warren St. around 1977 was a residence for musicians Lydia Lunch, Bradly Field, and Miriam Linna; members of the group Mars; and writer and former WFMU DJ James Marshall." 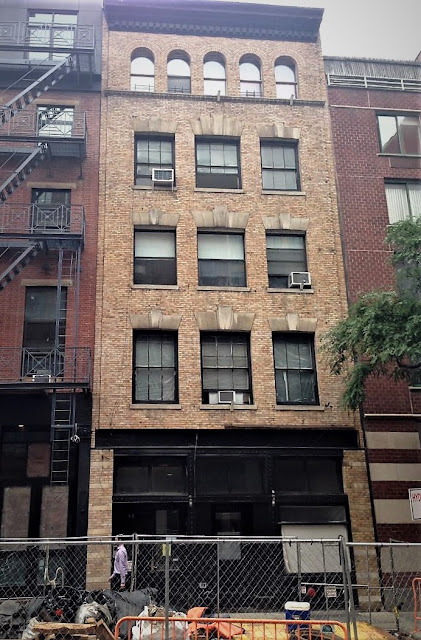 Official residential conversion came in 1990 when the building was transformed for one apartment per floor.  But more than 113 years of change in the neighborhood has not greatly affected the appearance of W. G. Beatty's handsome brick factory building.