Isaac Blauvelt made his living as a cartman--or delivery driver.  But like several other blue collar workers, he managed to get in on the Greenwich Village building boom in the 1820's.  In 1827 he erected a handsome brick-faced house at No. 531 Hudson Street and a stunningly narrow house around the corner on the end of the L-shaped plot, at No. 118 Charles Street.

Thirteen years later, in 1841, Blauvelt added to his holdings by building a two-and-a-half story home at No. 120 Charles Street.  Its architect took inspiration from both the Federal and newer Greek Revival styles.  The 22-foot wide house was trimmed in brownstone.  Its doorway above the stone stoop was slightly off balance with the upper floor openings  This was because of the horsewalk that nestled up to the stoop.  Essentially a tunnel that provided access to the rear yard, it was most likely used by the occupants of both 118 and 120.

If Blauvelt initially leased the house to a single family, it was being operated as a boarding house by the early 1850's.  Among the respectable residents in 1854 was Mary Jane Davis, a teacher in the Primary Department of Public School No. 3, at the corner of Hudson and Grove Streets.  Because she earned $125 that year, or about $3,760 today, she most likely could afford only a single room.

An advertisement in The New York Herald on May 31, 1856 offered "Three rooms, in a small, genteel house, with gas, &c., to a man and wife, or family of two persons.  The rent will be $12.50 per month."  That was one-tenth of Mary Jane Davis's annual income.

Although the advertisement described the house as "genteel," several of its boarders continued to manage on meager incomes.  George Wilkinson lived here in 1865.  He was a cartman and volunteered as a firefighter, or "laddie," at the Columbian Hook & Ladder Company, No. 14 nearby at No. 96 Charles Street.

The boarding house was being leased and operated by Charles M. Turner, and his wife Hilah in the early 1870's.  Turner ran other rental incomes, as evidenced by his advertisement on June 15, 1873.  "Country Board can be obtained on Long Island Sound, near the steamboat landing; splendid bathing, boating and fishing; terms reasonable."

Among the Turners' boarders was policeman John F. Standish.  He had been appointed to the newly-formed Metropolitan Police force on April 26, 1854.  By 1876 while living here he was working with the Steamboat Squad, earning a comfortable $1,200 per year.

Also in the house that year was Henry Tunin.  He had apparently befriended an elderly widow, Josephine A Colton.  The New York Times described her as an "unfortunate woman," following her suicide on July 7, 1876.  She left Tunin a silver cake basket and caster in her will "for his readiness and kindness in assisting me when requested."

Officer John Standish was still among Kuper's boarders.  He retired in 1884 and in 1886 was living on his pension of $600; about half of his former salary.  It may have been his reduced income that prompted him to move to New Jersey within a few years.

Charles I. Stewart acquired both No. 120 and its skinny next door neighbor, No. 118, around 1928.  He leased both in March 1929, The New York Times noting "The buildings are being renovated for studio apartments.

Architect Clive Wing's renovations included cutting an entrance above the horsewalk of No. 120 and installing a wide stoop to provide access to both buildings.

Perhaps the most celebrated of the tenants at No. 120 was Holly Beye, who moved in with her new husband, David Ruff, in 1946.  A reporter at PM, a leftist publication founded by Marshall Field, her true focus was on writing fiction, poetry and drama.   The couple left Charles Street in 1951 when they relocated to San Francisco.  In 2006 her journal of the life of struggling artists in the 1940's was published under the title 120 Charles Street, the Village:  Journals and Writings, 1949-1950. 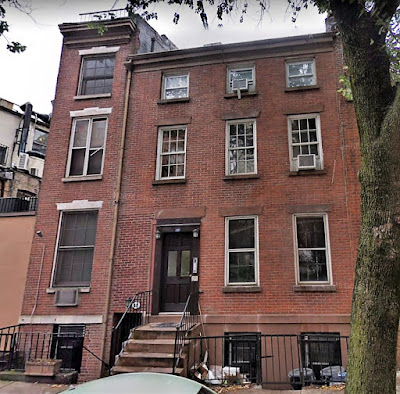 In 1969 another renovation joined Nos. 118 and 120 internally.  The stoop of No. 118 was removed and its entrance bricked up.   Unfortunately, the owners and architects did not make an effort to match the brick nor to restore the entrance.