In the years immediately following the end of the Civil War the family of John S. Meyer moved into the newly-completed brownstone house at No. 9 East 54th Street.  The block, between Fifth and Madison Avenues was lined with similar four-story residences by the mid-1870's.

On November 1, 1877 Andrew Ellicott Douglass purchased the house for $45,000.  The price tag, equal to more than $1 million today, reflected the upscale tenor of the block.

Born at West Point, New York on November 18, 1819, Douglass and his wife, the former Sarah Cortelyou Cornell, were married in 1847 and had one daughter, Isabel.  While he was a highly successful businessman--the president of the Hazard Powder Company--and held memberships in the Century Association and the Church Club, his true passion was American anthropology.  His academic interests were reflected in his memberships--the American Society of Natural History, the Metropolitan Museum of Art, the Numismatic and Archaeological, the Linnaean, Ethnological and American Geological Societies, and the Anthropological Societies of Washington and Paris.

Douglass's purchased of the commodious house followed by one year Isabel's marriage to Charles Boyd Curtis.  The newlyweds and their two-month old son, Ellicott, moved in with the Douglasses.

The marriage was Curtis's second.  The new father, at 50 years old, was 21 years older than Isabel.  Born in 1827 he came from an early New England family and had served in the Civil War.  Although he was admitted to the bar in 1850, by now he had given up law and was listed as a commission merchant.

Like this father-in-law, his passion was not in his business.  His expertise in art was recognized internationally.  In 1880, for instance, The American Art Review noted that he was preparing a new book, the Catalogue Raissoné of the Works of Velasquez and Murillo.  "The plan on which the author proceeds is a novel one.  He begins by examining all the old Spanish authorities,--Pachero, Palomino, Paez, Cean Bermudex, Tubino, etc.  All the pictures mentioned by these writers are to be classified according to subjects, to be fully described, and to be traced down to their present owners, wherever that is possible."  The expensive and exhaustive work took another three years to complete.


The Douglasses and Curtises not only shared the 54th Street townhouse, but a summer estate, Locust Wood, in Rye, New York.   The Curtis population gradually increased with the births of Charles Boyd, Isabel Woodbridge and Ronald Eliot Curtis.

For long stretches the families would see little of Andrew Douglass.  He had retired in 1876, the year of Isabel's wedding, and had thrown himself full-time into his study of anthropology.  The Wisconsin Archeologist later wrote "Since 1876, Mr. Douglass devoted much of his time to the study of the Indian artifacts of the United States.  He spent ten winters cruising along the Floridan Coast, locating over fifty Indian mounds, many of which he excavated."

When he was at home he, like his son-in-law, spent hours writing and his essays were widely published.  (Incidentally, Douglass should not be confused with the identically-named Andrew E. Douglass, born in 1867, who also left his name on archaeology.)

As the turn of the century approached, Fifth Avenue just steps away had seen the rise of palaces, most notably those of the Vanderbilt families.  The Douglass's brownstone was decidedly out of fashion, architecturally.  In May 1899 Douglass commissioned the architectural firm of York & Sawyer to give it a substantial make over.  Their plans, filed on June 2, called for a "new front, brick extension and interior alterations."  That hardly described the transformation.

York & Sawyer removed the stoop and pulled the facade nearly to the property line.  The rusticated stone base was fronted by a columned portico which upheld a balcony at the second floor, or piano nobile.  Three stories of Flemish-bond red brick were given understated Beaux Arts touches, like the effusive cartouches below the cornices of the second floor openings.  A full-width stone balcony introduced the steep copper-clad mansard level.

The interiors, of course, were also transformed.  The architects avoided fussy French decor, so popular at the time; but focused on English prototypes.  The families apparently whole-heartedly embraced the do-over, for period photographs show the rooms filled with new furniture.  Only a few antique pieces were kept. 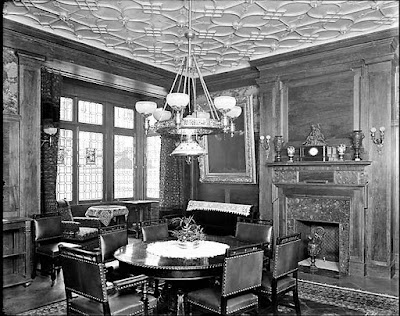 The renovations were completed by the end of 1900 and on December 20 the New-York Tribune noted "Mrs. Charles Boyd Curtis, of No. 9 East Fifty-fourth-st., has issued invitations for at homes on January 8 and 15."  ("At homes" were necessary to prevent confusion among socialites as to who was receiving and who was calling.)

The New York Times society column preferred to call the January 8 at home a "reception," and the following day said it "was practically a house warming, as it was the first entertainment given at their residence since its rebuilding."  Entertainments would temporarily end following the winter season that year. 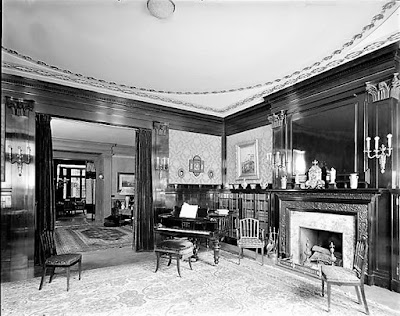 On September 30 Andrew Ellicott Douglass died in the 54th Street house at the age of 82.  The Wisconsin Archaeologist lamented "Anthropological science has thus lost a sincere friend."  Earlier that year he had presented a collection of over 22,000 specimens to the American Museum of Natural History.  In writing his obituary, Harlan I. Smith wrote "Although suffering from an infirmity of old age, Mr. Douglass was enthusiastic and cheerful to the last.  He was a man of great patience, charitable to those who differed from him in opinion, and of a gentle and courteous nature."

On October 18, 1902 Isabella Curtis was married in Christ Church at Rye, New York.  The New York Times reported "The ceremony will be followed by a reception for relatives and intimate friends only, as both families are in mourning, at Locust Wood, the country home of the Curtises at Milton Point, near Rye."

Charles Boyd Curtis died "unexpectedly" in the 54th Street house late on the night of March 25, 1905.  The New York Times recalled his book on Valesquez and Murillo, saying it "is often referred to as an authority."  He was buried in Greenwood Cemetery where Isabel erected a 20-foot tall Celtic cross created by Tiffany Studios to mark his grave.

At the time of Curtis's death, William Rockefeller had been battling the incursion of commerce along the section of Fifth Avenue known as Millionaires' Row for several years.  His own house stood at the northeast corner of Fifth Avenue and 54th Street.  In 1901 he purchased 5 East 54th Street and in 1904, when the St. Regis Hotel threatened to break through the block, he purchased Nos. 3 and 7.  Now, in 1906, he bought the Curtis house.  On September 29 the Real Estate Record & Guide commented "the purchase by Mr. Rockefeller effective shuts the St. Regis out of 54th st."

The Curtis family seems to have leased their home from Rockefeller.  Isabel and Elliott were both still listed at the address in 1908.  But following Sarah Douglass's death in 1910, they moved on, replaced in the mansion by Mrs. David Wagstaff.

Although Rockefeller stubbornly stayed on in his brownstone mansion, in 1914 he finally faced the cold facts.  On April 11 The Sun reported "William Rockefeller, who lives at the northeast corner of Fifth avenue and Fifty-fourth street has decided that trade has gained too much of a foothold in his section for him to prevent further expansion and yesterday leased the dwelling at 9 East Fifty-fourth street for business purposes.  Up until least year it was occupied as a dwelling."

London art dealer E. M. Hodgkins signed a lease at $10,000 a year--more than a quarter of a million in today's dollars.  The Sun added "The house will not be altered, as it could not be improved on for the purpose it is to be put to.  Mrs. David Wagstaff lived in the dwelling up to last year."

The building saw a variety of tenants over the next decades.  Following Hodgkins, Charles & Heller, ladies' tailors was here until 1921, after which Adolphus Gayne, Baron de Meyer leased the property.  Despite his noble title, Gayne was best known as a celebrity and fashion photographer.  He took the portraits of divergent figures from actors John Barrymore and Lilian Gish to King George V.  In 1913 he was appointed as the first official fashion photographer for Vogue magazine.

The photographer's stay was short lived.  In 1922 the former house filled with a variety of tenants. Interior decorator Agnes Foster Wright took the top floor, while other spaces were leased to Madame E. Ritchie, "gowns," dressmaker Miriam Bouslogue, and Mabel A. Barnet.  The ground floor was taken by K. and W. Hat and Cap.

The following year the Rockefeller estate sold No. 9 to the Mandel-Ehrich Corporation, which simultaneously purchased Nos. 3, 5 and 7 and 12 East 55th Street.  The former mansion was leased in November 1923 to Emile Villemin for use by the Librarie des Annals.

Along with the Library, the property now housed other organizations, like the Alliance Francaise and the Overseas Service League where Brigadier-General Lord Thompson spoke about World War I on March 7, 1925.  In 1927 the Overseas Service League lobbied theater managers to provide entertainment for disabled World War I veterans.  Its efforts resulted in blocks of ten seats being set aside in certain theaters, like the Roxy, for soldiers wounded in battle.

By the outbreak of World War II, the street level of No. 9 had been converted to a storefront, home to society clothier Boué Soeurs de Paris.   On April 18 it was the scene of a fashion show and entertainment to benefit the Red Cross War Fund of Greater New York.  It included an auction of autographed books by noted French and American authors.

The annual fashion shows of  Boué Soeurs were anticipated events among female members of society.  On March 16, 1950 The Times remarked "Femininity personified is the keynote of the spring and summer collection of Boue Soeurs 9 East Fifty-fourth Street."

But the days of fashion shows were coming to an end.  On December 7, 1950 The New York Times reported "Plans for the erection of a fourteen-story business building on Fifty-fourth Street, near Fifth Avenue, were announced yesterday."   The last of the Boué Soeurs shows was held in its salon on October 4, 1951.  A replacement building, engulfing Nos. 3 through 9, built by the Knickerbocker Construction Corporation, was completed in 1955. 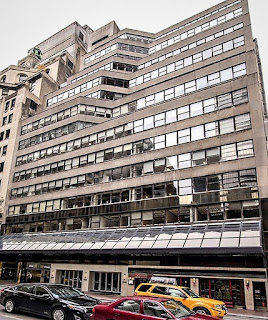