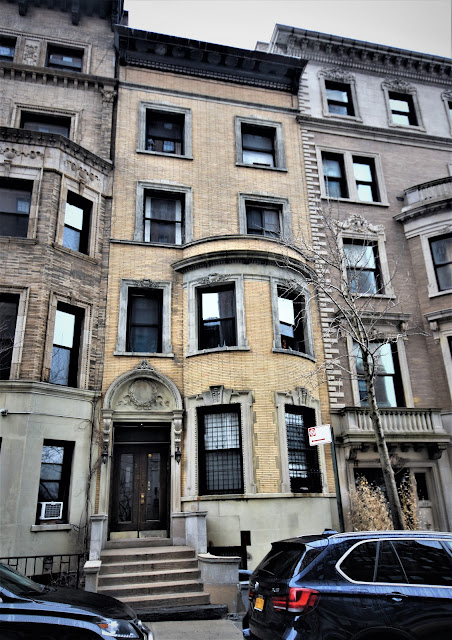 In 1895 James Mulford Townsend, Jr. was the proud owner of an upscale new residence next door to his father's.  The two houses, Nos. 318 and 320 West 75th Street, were designed by mansion architect C. P. H. Gilbert and constructed simultaneously.  That Townsend, Jr. did not move into his house, No. 320, is best explained by the fact that he was just 9 years old at the time.

James M. Townsend, Sr. most likely intended No. 320 to be an investment, reaping rental income.  Why he put the title in his son's name (he had a total of six children) is puzzling.  Nevertheless, young Townsend expectedly lived with the family in No. 318, attending the Taft School, while "his" house became home to well-heeled renters.

Interestingly, perhaps because Townsend viewed the two properties as unrelated, Gilbert made no attempt at architectural unity.  There was no harmony in materials nor even heights.

No. 320 was slightly shorter than its next door neighbor.  Faced in yellow Roman brick, it sat on a low limestone base.  Its Renaissance Revival design was embodied in the entrance hood, supported by swagged brackets.  Its carved tympanum was decorated by a wreath surrounded by swirling ribbons. 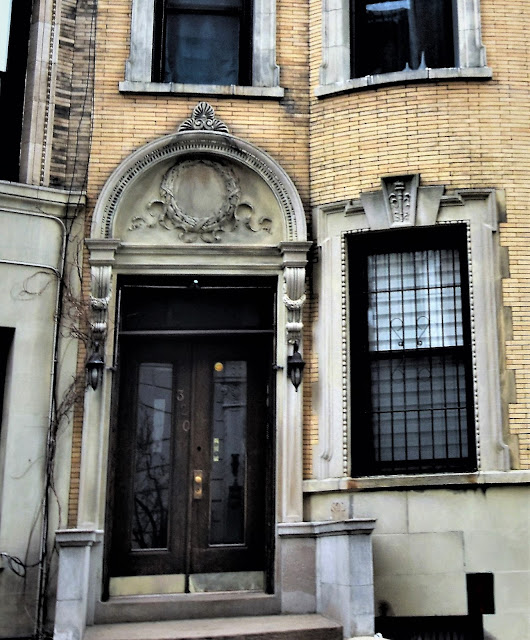 A two-story rounded bay provided a balcony to the third floor, the privacy of which was assured by a solid brick wall.  A deep cast metal cornice capped the whole.

James Jr.'s ownership was relatively short-lived.  In 1901 the title was transferred to his mother, the former Harriet Bailey Campbell.  The transaction cost $1.00.

The house was home to the Lewis Henry Spence family.  Spence was well-known as a merchant and reformer.  He was a partner in Simpson, Spence & Young, a steamship brokerage firm, and had been for years on the Board of Managers of the New York Produce Exchange.  Additionally he was the secretary of the North American Transport Co., and a director in the International Express Co.

Born in Ireland on September 18, 1847, he was brought to the United States while still an infant.  He was a member of the Chamber of Commerce and the Maritime Exchange.  Spence's political activism was evidenced in January 1901 when the Tilden Club was organized.  Among the officers elected on January 10, Spence was named treasurer and a director.  The New-York Tribune reported that the club was "a new centre of activity for anti-Tammany, anti-Bryan and Sound Money Democrats of the city."

Lewis Spence's well-rounded resume extended to street railways in 1909 when he was among the incorporators of the City and Suburban Railway Company in Brunswick, Georgia.

He and his wife, the former Anna Tuttle, had three sons, Lewis, Kenneth and Harold.   Harold and Kenneth lived with their parents in the 75th Street house and summered in the family summer estate, Owens Cottage, in Larchmont New York.

When World War I erupted Kenneth jointed the Army.  He served in France with the 489th Aero Construction Co., rising to the rank of First Lieutenant.  In 1918 the Columbia Alumni News announced that he had been released from service and could once again be reached at No. 320 West 75th Street.

As well as enjoying Owens Cottage, the Spences' were seen at fashionable watering holes over the years.  On October 17, 1908, for instance, The New York Times reported that the couple had arrived at Hot Springs, Virginia.  And in August 1920 the New-York Tribune announced that they were at the Aspinwall Hotel in Lenox, Massachusetts.

The Spences were in mourning at the time of the Lenox visit.  Harold, still unmarried, had died suddenly in the 75th Street house of pneumonia on January 23, 1920.  The funeral of the 42-year old was held in the house three days later.

The following summer the Spences were back among society.  On August 22, 1921 they hosted a dinner party at Delmonico's roof garden.

The Spences' departure signaled the end of the road for No. 320 as a private residence.  It was converted to apartments, however the owner did not go so far as to install electricity.  That decision resulted in tragedy.

On May 28, 1926 The New York Times reported "Tenants in an apartment house at 320 West Seventy-fifth Street, tracing an odor of gas, found Leo Louber, 31 years old, dead in his apartment on the top floor.  The gas was escaping from a wall bracket."

Throughout the subsequent decades tenants came and went from the 16 apartments, drawing little notice.  By 2010 a first-floor apartment was leased as the Office of the Permanent Observer for the Central American Integration System to the United Nations. 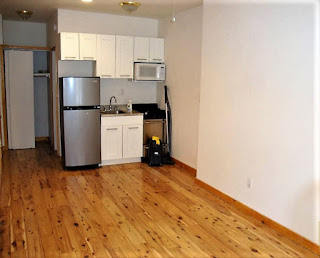 While the exterior of No. 320 West 75th Street survives mostly intact, the interiors have not fared very well.  The spacious rooms where Anna Tuttle Spence once entertained have been stripped of their architectural detailing and divided into small apartments.