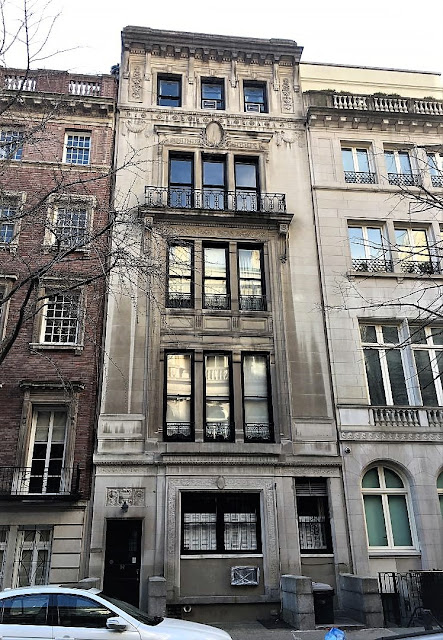 Born on September 6, 1850, Harriet Mears Starin came from an old New York family; her ancestors first arriving in America in 1696.  Her father, John Henry Starin, had increased his already substantial fortune by organizing the first railroad agency for shipping freight, and establishing the Starin Line, a fleet of steamboats for the same purpose.  He purchased Glen Island in the Long Island Sound as the the family's summer estate; but then in 1890 with "a lavish expenditure of money," he transformed it to a pleasure resort.  The family mansion became its clubhouse.

Harriet married James Dyckman Spraker on December 14, 1870.  He ran a wholesale grocery business at No. 93 West Street, the success of which was reflected in his memberships in the Manhattan Club and New York Athletic Club.  The couple had three children, Laura Belle, Marguerite, and John Starin.  By 1888 they were living in an upscale home at No. 62 West 45th Street.

Laura Belle married the well-known journalist A. B. de Guerville in 1896.  The following year John Dyckman Spraker died.   With her significant inheritance, Harriet and her two teen-aged children (Marguerite was 19 and John was 17-years-old) continued to live comfortably in the 45th Street house.

Harriet's financial lot was increased through another misfortune  On March 22, 1909 her father died.  She inherited $10,000 outright (each of the children received $5,000); half interest in Starin Place, a 144-acre country estate in Fultonville, New York which she shared equally with her sister; and one-third of the balance of the estate, after bequests to charities.

Included in that "balance" was Glen Island.  On January 25, 1910 The Sun reported that Harriet, her sister Caroline and Caroline's husband had sold the property for about $600,000--in the neighborhood of $16 million today.  Three weeks later the Real Estate Record & Builders' Guide noted that Mrs. Hugh Gordon Miller had sold the four-story brownstone residence at No 14 East 73rd Street.  The unnamed buyer was Harriet Spraker.

She hired architect William A. Boring to remodel the out-of-date house into a modern residence.  His plans filed on March 18, called for front and rear extensions, new interior walls, and windows cut into the facade at a cost of $40,000.   Boring apparently left at least one of the original walls standing, because Department of Buildings documents still record the construction an "alteration."  But the result was arguably a new building.

Completed within the year, the limestone-faced mansion was now five stories tall.  Boring's restrained Beaux Arts design forewent the gushing ornamentation of some other homes in popular style, opting instead for quiet elegance.  A few steps above the sidewalk the centered double-doored entrance sat within a delicate carved frame.  Above the service entrance to the left was a handsome panel depicting an urn of flowers.

The close groupings of three openings at the second and third floors were fronted by dainty French grills.  A stone balcony with iron railings ran the width of the fourth floor windows which were united by a carved frieze and cornice.  Foliate-carved panels flanked the top floor openings, under a stone bracketed cornice. 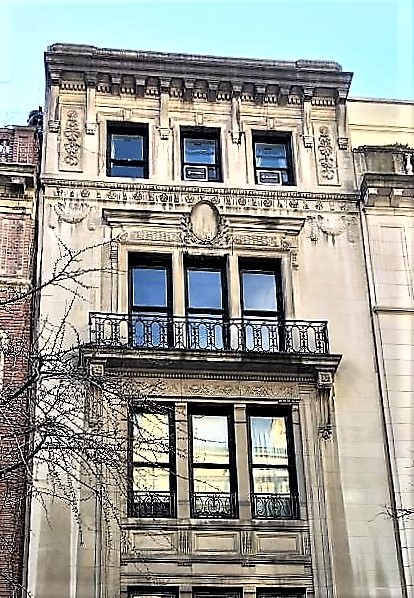 The interior woodwork was fabricated by Theodore Hofstatter & Co., which may have also been responsible for some of the furnishings.  Like the similar firms of W. & J. Sloane & Co. and Herter Brothers, Theodore Hofstatter & Co. sometimes provided complete rooms--woodwork (like paneling, bookcases and even staircases), textiles and custom-made furniture.

Before ground had been broken John Starin Spraker married Helen Morgan Newcomb.  The wedding took place on January 20, 1910.   When the newlyweds returned from their honeymoon, they moved into the 73rd Street mansion with Harriet and Marguerite.

Some things apparently did not satisfy Harried in her new home.  In July 1911, only months after she moved in, the well-known architect John H. Duncan filed plans for "general alterations" costing $2000.

Harriet circulated in society.  Both she and her son were members of the Metropolitan Museum of Art, and her name appeared in the social columns.  But interestingly, her entertainments never seem to have been held in the 73rd Street mansion.  The dinners and luncheons she hosted were held in fashionable restaurants like Delmonico's; and even when she gave a luncheon for Laura Bell on August 8, 1922, it was held at Sherry's.

It was Marguerite who finally had people in; but that was not until nearly two decades after the house was completed.  Still unmarried, she hosted a dinner here on February 27, 1931.  The New York Times reported that she would "afterward take her guests to the Pierre for supper and dancing."  One wonders if Harriet was displeased at the domestic upheaval; because that was the only mention of an entertainment in the residence by newspapers.

John and Helen acquired their own country residence at Ardsley-on-Hudson; while his mother and sister continued to summer at Starin Place in Fultonville.  The women traveled there the last week of May 1933 to spend the summer.   Harriet, who had been in ill health for some time, died there on June 3 at the age of 83.

Interestingly, John and Marguerite left their home of two decades.  On December 3, 1934 The New York Times reported that they and Laura Belle had leased the mansion to William Kerrigan.  They continued to lease it until January 1943 when "an investor" bought it.  It was the end of the line for the mansion as a private home.

In 1994 the newly-formed Simon Dickinson, Inc. gallery moved into the fourth floor.  Operated by Ian G. Kennedy and Simon Dickinson, both long-time executives at Christie's Fine Art Auctioneers, it specialized in old masters.  By 2004 the Salmon Lilian Gallery was here.

Despite the abuse at ground level, the exterior of Harriet Spraker's mansion still exudes its 1910 elegance.  Inside is a different story.