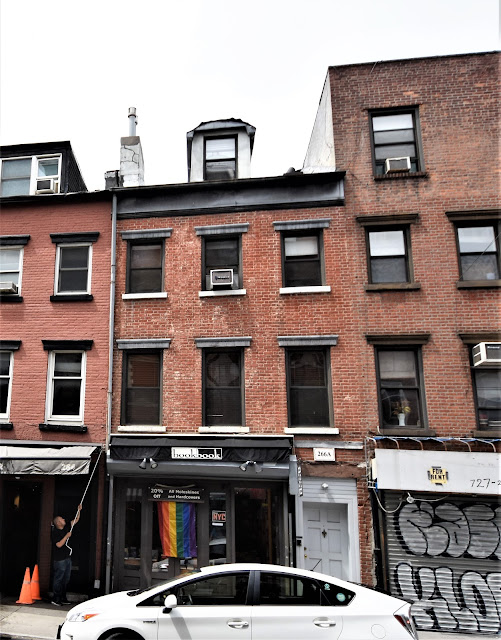 Charles Oakley was perhaps responsible for the erection of more houses and shops during the Greenwich Village building boom of the 1820's and '30's than anyone else.  A Village native, he was both an attorney and merchant; but it is his development of scores of middle-class structures for which he is remembered.

Around 1833 he completed a row of five houses on the west side of Bleecker Street between Morton and Leroy Streets, each with a shop on the ground floor.  (Four years earlier he had petitioned the Common Council of the City of New York to rename Herring Street to Bleecker Street.)

No. 250, like its identical neighbors, was three-and-a-half stories tall, including the store.  It was faced in Flemish bond red brick and trimmed in brownstone.  A single dormer pierced the roof, and a simple wooden fascia board ran below the cornice.

At least by 1841 the ground floor held the drugstore of Joseph M. Frey.  He lived upstairs with his father, Rev. Joseph Samuel C. F. Frey, a fascinating figure in religious history.  The men shared the upper floors with William S. Woodward, who ran the hardware store at No. 201 Greenwich Street.

Rev. C. F. Frey (he rarely used his two first names) was born on September 21, 1771 in Maynstockheim, Germany to strict Jewish parents.  He and his brothers were schooled at home by a tutor.  Frey later wrote "My mother herself narrowly watched us, and would never suffer us to read any book but in the Hebrew language, lest we should read any thing about the christian religion."  He added "Our tutor took every opportunity to impress us with prejudices and hatred against the christian religion."

But all the precautions fell short.  As a young adult Frey embraced Christianity, and convinced German ministers to give him instruction.  His arduous quest took him to Berlin, then to London, and finally, in 1816, New York City.  His purpose in coming to New York was to set up a branch of the London Society for Promoting Christianity among the Jews.  By the time he moved into the Bleecker Street house, he was a member of the Baptist Church of Christ on Mulberry Street, and the author of several books and treatises.

Frey arrived in his new country armed with a packet of letters of recommendation from clergymen in London.  He would need a position and funds, after all, if he were to establish the society.  Typical was the introductory letter fro David Bogue:

The Rev. C. F. Frey, of the seed of Abraham, was a student of the seminary at Gosport, upward of three years.  I believe him to be a true disciple of Christ; I consider him well qualified to teach the Hebrew tongue in any of the schools or colleges of the United States; and I cordially recommend him to the kindness and patronage of the friends of religion in America.

It is unclear how long Joseph Frey maintained his drugstore here.  His father left New York in 1843 to make a nine-month tour of Georgia, Alabama, Tennessee, and Kentucky on behalf of the American Society for Meliorating the Condition of the Jews.

The occupants of the upper floors had changed by 1846 when Jacob L. Dodge and James B. Dupignac lived here.  Dodge was a butcher with two shops, one at No. 32 Cornelia Street and the other at No. 236 Bleecker Street--both conveniently steps away from No. 250.  Dupignac was a publisher with offices at No 55 Reade Street.  In 1842 he was voted a Commissioner of Common Schools in the First School District, as well.

Dodge,too, was a well-rounded man whose interests went far beyond the butcher business.  In 1847 he was elected to the Board of Aldermen.  He additionally held at least two patents for "hats."  But it was politics, not pork chops or headwear, for which New Yorkers recognized Dodge's name.

In October 1854 he fired off an angry letter to the editor of The New York Times which read:

DEAR SIR:  Having noticed the publication of my name in several journals of this City, as being an independent candidate for the office of Commissioner of Streets and Lamps, I desire to inform the public through your valuable paper, that I am not a candidate for any office whatever; and, in conclusion, I most cheerfully recommend to the Whigs of the City and County of New-York, to cooperate with me in the support of the regular nominated candidate of the Democratic Whig party, Christian W. Schaffer, Esq.

In the meantime, Dodge had new neighbors upstairs at No. 250 by 1849.  Benjamin Herman, a painter, was also living here that year, as was Charles P. Lindley.  Lindley was a partner with Aaron Mundy in Lindley & Mundy, the drygoods store that now occupied the ground floor.  The proprietors' interests were philanthropic as well as commercial.  The store was listed as a supporter of the New-York Association for the Improvement of the Condition of the Poor.

Lindley & Mundy made way for another dry goods store, J. & S. Langstadter, in 1850.  It was run by brothers Jacob and Samuel, both of whom lived upstairs.  Jacob was also a partner with Bernhard Langstadter in the J & B Langstadter store at No. 268 Bleecker Street.   The two stores do not seem to have competed with one another, J & S Langstadter being described as "drygoods," and J & B Langstadter as "hosiery."

Jacob L. Dodge does not appear in city directories as living here in 1859 when Bleecker Street was renumbered, giving the building the new address of No. 266.  The Langstadters were still here, along with Anne Hare, a widow, and her two grown sons, Frederick W. and George R. Hare, both clerks.  Whether he lived here or not, Dodge nevertheless purchased the building in 1862.

By 1865 Ernest Albrecth's "book and shoe store" occupied the ground floor.  That year, on March 15, one of the upstairs tenants, J. Spear, was drafted into the Union Army.

The continuous turnover in upper floor occupants continued.  Augustus and Guidia Stoppelkam anticipated a new member of the family in March 1867.  But infant mortality, especially among the working class, was high in the mid-19th century.  Tiny Charles A. Stoppelkam lived only briefly.  The infant died on April 7 and his funeral was held in his parents rooms here two days later. 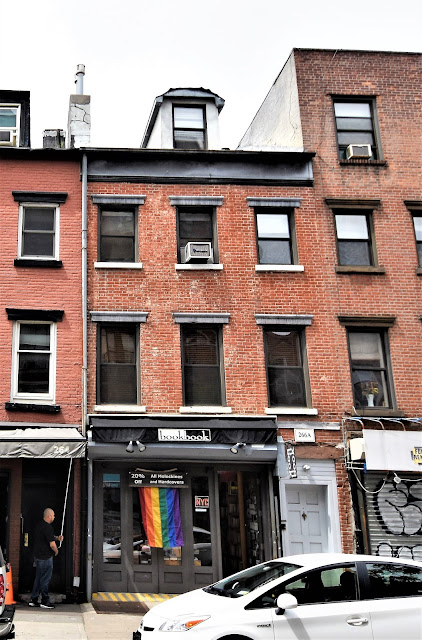 The remainder of the century saw significant changes to Greenwich Village.  Poets, musicians and artists were drawn to its winding streets, creating Manhattan's Bohemia.  Bleecker Street became an even more important shopping street, filled by the end of the century with Italian bakeries, butcher shops and similar stores.

On August 28, 1921 The New York Herald reported that Mrs. G. Montante had purchased No. 266, which she "intends to alter and occupy."  It was most likely Montante who converted the upper floors into a single residence.

In 1950 Books-By-Mail moved into the store, starting a long tradition of book sellers in the space.  After being at the corner of Bleecker and 11th Streets since 1984, Biography Bookshop moved to No. 266, changing its name to Bookbook.  The shop remains there.  In the meantime, the time-worn house still retains much of its appearance from a time when a renowned Jewish-born Christian evangelist lived here.