By the time Mr. Benson moved his family to No. 47 Prince Street, on the northwest corner of Mulberry Street, the house had several tenants.  Built in the late 1820's or early '30's, the Federal-style building may have always had a shop in the ground floor.  While technically two-and-a-half stories tall, the exceptional height of the attic within the gambrel roof made that level nearly a full floor.  Tall dormers on the Prince Street elevation and an arched opening flanked by quarter-round openings on the Mulberry filled the attic floor with daylight.

Mr. Benson had been struggling with a difficult problem in the fall of 1843--three of his children had intestinal worms.  He found the cure, according to an advertisement in The New York Herald on December 19, at Apothecaries' Hall, No. 60 Prince Street just one block away.  The ad claimed "No Room For Doubt--Mr. Benson, 47 Prince street, cured three children with one 18 [cent] box of Kent's Worm Lozenges, after many other medicines had been tried without effect."

The house had originally been built for a merchant class family--possibly the owner of the ground floor shop.  It was 25-feet wide on Prince Street and an ample 80 feet deep on Mulberry.

But by now the neighborhood had noticeably changed.  The tenants were working class, as evidenced by an ad placed by two of them in November 1845. "Wanted--Situations by two Young Women--one as good plain cook, washer and ironer; the other as chambermaid, or nurse and seamstress...Apply at 47 Prince st, first floor, back room."

Over the next decades tenants--many of them women--would continue to struggle to find employment.  In December 1840 one sought a job as "Chambermaid and Seamstress, by a Protestant young Woman, or Chambermaid and to do the fine Washing and Ironing."  Another in March 1852 wrote "A Very Respectable Young Woman Wishes a situation to do chamberwork, and assist in the washing and ironing; she is a good plain sewer, and wishes to make herself useful; will take turns in the kitchen, if required."  And another, in the fall of 1862 marketed herself as "a first rate laundress" and sought "a situation in a hotel or boarding house."

Many of those out-of-work women were struggling Irish immigrants, typical of the changing face of the Prince Street neighborhood.  They eked out their hardscrabble existence in an increasingly rough environment.  That was evidenced on July 16, 1874 when The New York Times reported "Ann McGrath, aged forty-one, of No. 47 Prince street, quarreled yesterday evening with Peter Hughes...when Hughes struck her on the head with a glass causing three severe scalp wounds."  Ann was taken to Bellevue Hospital and her assailant was jailed.

Wealthy New Yorkers escaped the suffocating summer heat at their country homes, or at resorts like Newport.  Impoverished immigrants, on the other hand, suffered the heat at their work and in their rooms.  Each day during the hottest weather newspapers published lists of those who were "prostrated" or had succumbed.  On July 13, 1882 The New York Times added to its list: "William McNeil, a Scotchman, 35 years old, died suddenly at his residence, No. 47 Prince-street, from sun-stroke."

The former store space had been home to Michael Barry's saloon for several years.  Four months before McNeil's passing, Barry had relinquished the lease of the bar to one of McNeil's countrymen, George D. Noremac.

George's real surname was Cameron and he was a celebrity in the rabidly popular walking races; known in Scotland as "King of the Peds."  Early on, in order to stand out among other contestants, he changed his name by simply spelling it backwards.

On March 25, 1882 the New York Clipper noted that Noremac, "the noted young Scotch long-distance pedestrian" had taken the saloon "formerly kept by Michael Barry."  The newspaper felt his name would be beneficial to his new endeavor, saying "his exploits on the pedestrian path should operated to his advantage in business."

Once settled into the new business, Noremac brought his wife, the former Elizabeth Edwards, and their son and daughter from Scotland (they retained the name Cameron).  The family lived above the saloon, renting rooms to immigrant laborer John Ryan, a house painter, and to Noremac's trainer (who doubled as a bartender) George Beattie.

Noremac sponsored his own walking race later that year.  An announcement in the New York Clipper on December 9 read:

George D. Noremac,
47 Prince Street,
will give $125 in prizes for a GRAND 12-HOUR HANDICAP-RACE, limit 8 miles, go-as-you-please, at Wood's Athletic Grounds, Williamsburg, L.I., on Christmas day.  Entrance $3, to close Dec. 18, at the above address.


Noremac took in a house guest in 1883, William Cummings another well-known walking racer.  The New York Clipper reported "This famous Scotch pedestrian...is due at this port to-day, June 6, on board the steamer Wyoming."  He had come to New York to participate in several races.  The newspaper noted "On landing in New York Cummings will take up his quarters with George D. Noremac of six-days, go-as-you-please notoriety, at his saloon, 47 Prince street, and there will have his abode a fortnight to get himself thoroughly in condition to fulfill his engagements."

("Six-day, go-as-you-please" races lasted 144 hours and participants could enter and exit the track at will, picking up where they left off after stopping to eat, sleep or rest.  Judges counted their laps and calculated the miles covered at the end of six days.)

Ten days later the same newspaper updated its readers on Cummings's training for his upcoming match against pedestrian William Steele of Pennsylvania.  Calling Cummings the "celebrated Scotch flyer," the "champion of England," and at "the pinnacle of fame," the article noted that he "has been accompanied in his practice-runs by his backer, Noremac, whose public-house at 47 Prince street he makes his headquarters."

On August 18, 1883 Noremac opened a second saloon, at No. 466 Eighth Avenue.  The family moved into the second floor of that location.  It would become a scene of horror.

George Beattie and Elizabeth did not get along well.  He was often drunk and and used abusive language to the other saloon workers.  And she told her husband Beattie was "a nuisance."

Less than a week after moving in, on Thursday August 23, Beattie entered the apartment knowing Noremac was in the saloon awaiting his breakfast.  The children heard a pistol shot, then another.  Elizabeth Cameron lay on the kitchen floor dead, next to the body of her murderer.

Exactly a year later, in August 1884, Noremac gave up the Prince Street saloon.  It was leased to the Williamsburgh Brewing Co.  Breweries commonly operated saloons in the 19th century; an arrangement which made it possible for them to sell only their own ale and beer.

Murto Moriarty and his wife lived in a single room in the house in 1890.  Early in the morning of July 28 he was awakened by noises in the darkness.  The Evening World reported "He jumped out of bed and collared Edward Reardon, seventeen years old...his brother-in-law, and Daniel Flannery, twenty-one years old."  They had stolen $2 from Moriarty's clothes before being caught.  Moriarty did not let family ties (nor his wife) influence his actions.  He had the teen and his accomplice hauled off to the Tombs Police Court.

James Curtin seems to have been working in the saloon in August 1894 when he sought a new position.  His ad read "Steady, sober waiter wants a job in a downtown lunch-room or restaurant."  Most likely the reason for his career move was his advance notice that the saloon was closing down.

Within months the ground floor space was home to Samuel Cohen's cigar shop.  He employed five men, two teen-aged boys, and two females (one in her teens) to make his cigars.  Cohen would remain until 1901 when Francesco Marchioni leased the space, converting it to a restaurant.  Marchioni's operation lasted seven years.  In 1904 he was paying $500 annual rent on the space, or nearly $1,200 per month today.

In March 1908 Gaetano Mangano took over the lease of the store, paying exactly twice the rent.  It was most likely he who converted the restaurant to a corner store where neighbors could purchase staples like cigarettes and flour.

In 1924 the end of the line for the old structure was on the horizon.  The corner store was boarded up and photographs show the upper floors apparently vacant.

The venerable building lasted just over a century.  Its replacement building was demolished around 2008 and the subsequent structure by Kevin Byrne Architects, P.C., was completed in 2017. 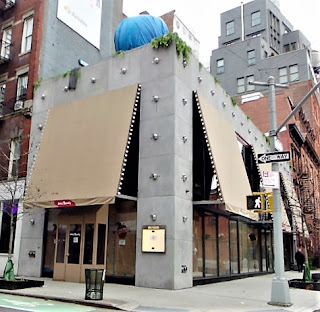