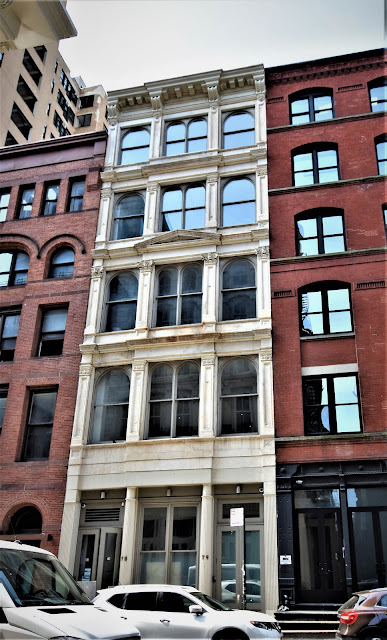 
Although the 25-foot wide building would not be officially completed until 1862, the Government could not wait that long.  On April 12, 1861 the first shot was fired that sparked Civil War.

By the end of summer No. 79 White Street was filled with uniformed officers organizing the newly-recruited Union soldiers.  On August 23 The New York Times announced "Commandants of all regiments accepted by the War Department are requested to call upon Lieut.-Col. D. B. Sacket, at the mustering office, 79 White-st., where he will explain to them all the provisions made by the Department, for facilitating the collection, subsistence and transportation of recruits."

The building was also used as an interim barracks for northern units traveling to the front.  In January 1862, for instance the 1,046 men of the New-Hampshire Seventh Regiment were quartered here awaiting further orders.

The War Department continued to use the otherwise vacant building for military purposes.  On May 6, 1862 Adjutant General Lorenzo Thomas of the War Department wrote to Brigadier General Harvey Brown informing him in part, "Lieut.-Col. Nichols, U.SA., has a building, No. 79 White-street, which can be used as an office of record and reference, and a temporary asylum for men arriving in the City."

The Union Army additionally used the building for quartermaster purposes.  The Mustering Officer, Captain F. S. Larned, announced that on July 7, 1862 he would be receiving sealed proposals "for supplying Cooked Rations to volunteer organizations."  The successful bidder would have to supply more than merely food, however.  "Four pounds of Soap and one pound of Sperm Candles to every one hundred rations is to be furnished by the contractor."

When enlistments slowed, the Mustering Office provided an incentive, or "bounty."  On July 27, 1862 The New York Herald reported "By the middle of next week preparations will be made at the Mustering office, No. 79 White street, to pay each recruit on the spot, immediately after being mustered in, the sum of $28, being part of the United States bounty.  This is as it should be, and will greatly facilitate recruiting."

Gallant soldiers who were captured and imprisoned by the Confederate Army suffered horribly.  The New York troops who were rescued and returned home were paid at No. 79 White Street.  In June 1862 Brigadier General Harvey Brown was ordered "to muster for payment about fourteen hundred returned prisoners now arriving...from the Department of North Carolina."  The New York Herald announced "Payment will be made to these men as soon as the muster rolls can be completed."  Unfortunately for the war-weary men, they were not home for good.  The article noted that they were "granted leave of absence for twenty days."

A year before the war ended the Government left No. 79 and the building was leased, as originally intended, to apparel and dry goods firms.  E. S. Jaffray & Co. moved into the third floor around February 1864.  In March the firm placed an advertisement seeking "100 first class cloak and mantilla makers; none but those accustomed to the best work need apply.  Also two or three assistant forewomen and operators on Wheeler & Wilson's and Grover & Baker's sewing machines."  Decades later, in 1893, King's Handbook of New York City recalled that E. S. Jaffray "had surprised many persons by sacrificing to his patriotic principles the great business interests which he had in the South."

E. S. Jaffray shared the building with apparel manufacturer C. W. Griffiths & Co., which moved in around the same time.  On March 4, 1864 the firm placed an advertisement in The New York Herald seeking "Chenille head net and experienced headdress makers," and six months later it was looking for  "A young man or a good sized boy.  Work light."

The substantial operation of E. S. Jaffray & Co. was clearly evidenced a year later when it advertised for "200 experienced cloak and mantilla makers," on March 13, 1865.  The firm was hiring again in August 1866, looking not only for cloak makers but "25 hands to work on lace goods" for mantillas.  That incredible success necessitated the firm to erect its own building at the corner of Broadway and Leonard Street around 1868.

The upper floors continued to house apparel firms, like B. M. Samter's "balmoral skirt" factory.  In 1871 the firm was the victim of a bold robbery.  At about 7:30 on the morning of March 7 a delivery wagon pulled up in front of the building, laden with cloth.  As the driver went in, an opportunistic thief took the reins and drove away.

By 1877 the Continental Corset Works operated here and would remain at least through 1884.  In 1886 its owners were granted a patent for the "Scented Corset."  The firm had gotten a new landlord in April 1881 when the estate of Solomon Kohnstamm sold the building to brothers Marx and Moss Ottinger for $32,300--about $800,000 today.

The Ottingers brought in a variety of tenants.  By 1887 the ground floor had been converted to the saloon of Ferrigan & Smith (who ran another saloon known as Cobweb Hall at No. 80 Duane Street).  At the same time the second and fourth floors were home to book manufacturer Edward Barr, the third held Hartwig Kantorowicz's cordials firm, and the top floor was home to Kronk & Co., cloak manufacturers.

The saloon was taken over by Friedhoff & Meyer when they signed a 10-year lease on April 1, 1891.  Like their predecessors, John P. Friedhoff and Henry C. Meyer operated two saloons, the other at No. 84 First Avenue.

The popular watering hole served Tribeca workers for decades; operated by a succession of proprietors.  In July 1897 the Lembeck & Betz Eagle Brewing Company took over the lease.  It was common practice for breweries to operate their own saloons in the 19th and early 20th centuries, giving them the opportunity to monopolize the beers and ales offered.  Another prominent brewer, Peter Doelger, took over the saloon in 1899.

Forty-five years after its completion, the building's age was taking its toll.  The antiquated plumbing caused major problems for sanitation inspectors in 1906.  The Sanitary Superintendent certified that No. 79 "has become dangerous to life and is unfit for human habitation because of the existence of a nuisance on the premises which is likely to cause sickness among its occupants."  The building was ordered vacated "on or before September 16" and a placard announcing the danger was affixed on the front.

Following the necessary upgrades, tenants moved back in, including the long-time L. Rosenbaum & Son (which by now were operated under the name of Great Eastern Suspender Company).  They would be joined by the Banner Mfg. Co., children's wear makers; and McCherry Co. by 1917, makers of handles for rakes, brooms and other tools.

The opening of the Broadway Subway line on New Year's Day 1918 was immediately reflected in the rent of the store at No. 79 White Street.  A month later, on February 16, The Sun reported that it had been leased to the F. M. Lupton Company "at an increased rental of 70 percent, over what was formerly obtained for it."

The publisher operated its bookstore in the space--a drastic change from the former saloon.  The Bookseller described its books as being "from the pens of well-known writers and in superior dress and bindings."  The firm also produced magazines like the People's Home Journal, McClure's Magazine, and the Periodical Press.

Down the block at the corner of White and Franklin Streets was the Hungerford Building, home to the U. T. Hungerford Brass and Copper Co.  In January 1919 the firm purchased the building at No. 81 White Street and leased space in No. 79 for warehousing.   Its architect, William E. Austin, broke through the walls to join the upper floors internally.  In the meantime, William Mulholland, clothiers, had occupied the second and third floors for at least three years.

In January 1921 U. T. Hungerford Brass and Copper purchased No. 79.  Immediately it brought back William Mulholland whose plans called for altering the building "into offices" for the new owners.

Case Brass and Copper Company acquired the firm in 1927, and it would remain in the combined buildings for decades.  Space was subleased following World War II to the Strahs Aluminum Company.

Then in 1960 the combined properties were purchased by William Abramowitz, head of the Concord Radio Corporation.  The New York Times reported he intended to use the building "for his other electronic enterprises."  Real change came, however, in 2006 when a conversion of Nos. 79-81 resulted in two apartments per floor above street level.