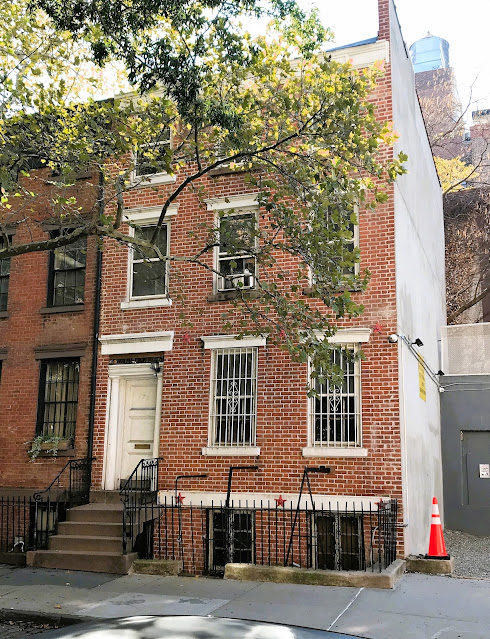 A wide range of tradesmen invested in the building boom that erupted in Greenwich Village in the 1820's and '30's.  Among them was William E. Fink, a grocer.  In 1833 he erected a row of speculative houses on Bank Street, at the corner of Greenwich Street.  Three stories tall and faced in Flemish bond red brick, they were early examples of the Greek Revival Style, exchanging a short attic level for the peaked roof and dormers of the Federal style.  They clung to that earlier style, however, in the entranceways where the single, paneled door below an overlight was flanked by thin columns.
In 1842 126 Bank Street (renumbered 136 in 1866) became home to the family of Garret Forbes.  Born on September 2, 1785, his father was the noted silversmith, William Garret Forbes.  Like his two brothers, Garret joined his father's business beginning in 1805. 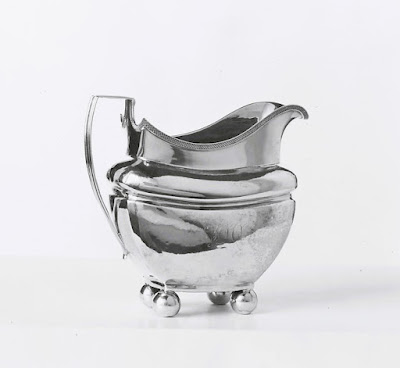 This silver creamer, in the collection of the Metropolitan Museum of Art, is an example of Garret Forbes's work.
Forbes soon opted for a different career, and in 1817 was appointed "weigher and collector" in the U. S. Customs House.  It was a highly responsible Government position that he held until 1839, when he was replaced by Jesse Hoyt, who was nominated by President Martin Van Buren.
When Forbes moved his family moved into the Bank Street house, he held the position of  Day Inspector at the Customs House.  Then, on August 12, 1844, he was the victim of a purge.  The New York Herald wrote that the building was "the scene of much excitement yesterday, owing to the announcement of some fifty removals from the Custom House, with as many appointments.  There were long faces, and short faces, puckered mouths and open mouths, grinning on one side and squirming on the other."  Among those let go was Garret Forbes.
The 59-year-old retired.  City directories now listed him simply as "late Customhouse officer."  Meanwhile, living with him and his wife, Sarah, were their daughter and her husband William Barnes, who was involved in the insurance industry.
On April 19, 1851 the Morning Courier and New York Enquirer reported, "Mr. Garrett [sic] Forbes, an old and respected citizen, while walking in his yard, on Friday afternoon, suddenly dropped dead, supposed to have been caused by a fit of apoplexy."  The term referred to what is today called a stroke.  The funeral of the 66-year-old was held in the parlor the following day.
William Barnes became actively involved in the Kansas Free-Stater movement, started in 1854.  The Free-Staters, composed mostly of abolitionists from New England, initiated an organized emigration of like minded settlers to the Kansas Territory in order to make Kansas a slave-free state.
By 1857 Barnes was secretary of the New York State committee.  He placed an advertisement in the New-York Daily Tribune on March 25, 1857 that read:

Ho! For Free Kansas
A Company of Kansas Emigrants will start from Bennett's Temperance Hotel, Buffalo, on the First Day of April, 1857, under charge of the Rev. A. H. Shurtleff of Watkins, N.Y.  Tickets can be procured by furnishing satisfactory evidence to the undersigned of the intention of the applicant to become a bona fide Kansas Emigrant.  Fare:  Albany to Kansas City, Wyandot, Quindaro, and Leavenworth, $28.57.
William Barnes, Secretary

By 1860 Barnes was, as well, the head of the Insurance Department of the State of New York.  His financial status afforded him the ability to purchase a country estate in White Plains, New York.
Sarah Forbes died in the Bank Street house on January 23, 1861 at the age of 72.  Her funeral was held there four days later.
William Barnes and his wife remained at 136 Bank Street until a freak accident changed Barnes's life.  The couple was at their country home in the summer of 1866.  On July 12, Barnes was watching the operations of a mowing machine on the property.  The New York Herald reported, "While he was in front of the horses attached to the machine, they took a sudden start, driving the blades of the mower into his leg near the foot, almost severing the lower portion of the limb."  The article said Barnes's wound was so severe that amputation would be necessary.
The Bank Street house was purchased by James M. Renville, a clerk.  Born in  1835, he appears to have been a life-long bachelor.  It was almost assuredly he who enlarged the attic windows to full height.  Renville remained here until his death at the age of 59 in 1894.
The West Side Federal Savings & Loan Association took possession of the house during the Depression years.  The institution sold it in May 1938 to Frederick Andrews for $9,000, or about $173,000 in 2022 terms.  The following year the house next door at 138 Bank Street was demolished for a gas station. 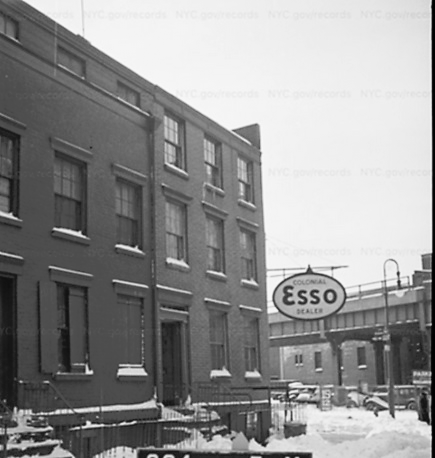 The original configuration of the attic windows can be see in the once-identical 134 Bank Street (left).  image via the NYC Dept. of Records and Information Services.
In 1972 the house became home to a colorful Greenwich Village figure.  William Gottlieb purchased it that year for $37,000 (about $184,000 today).   Born in Coney Island three years before Frederick Andrews had bought the house, he quietly accumulated properties in Greenwich Village.  Moreover, his lifestyle gave no hint of his wealth.  He dressed shabbily (one local said he appeared to be homeless), and drove around the neighborhood in a car with its windows broken out.  Andrew Rice of The New York Times later described him, writing "Gottlieb was a heavyset and invariably dressed in wrinkled pants and an old golf shirt, which some people suspected he seldom changed."
The miserly landlord's only efforts to improve a property, according to real estate agent Arnold Warwick, was "making them habitable and applying a fresh coat of paint."  Inadvertently, he became a leading preservationist in the district simply because he never demolished nor altered his buildings.
The buildings he purchased on the far West Village along Hudson Street and Eighth Avenue were relatively inexpensive in the 1970's.  Because he refused to sell, only to buy properties, he saw the worth of his empire skyrocket.
In October 1999, Gottlieb complained of dizziness in his Hudson Street office, and collapsed.  He had suffered a stroke and died on October 5 at the age of 64.  At the time of his death he was one of the largest owners of property in the West Village, his real estate estimated to be worth between $200 and $300 million. 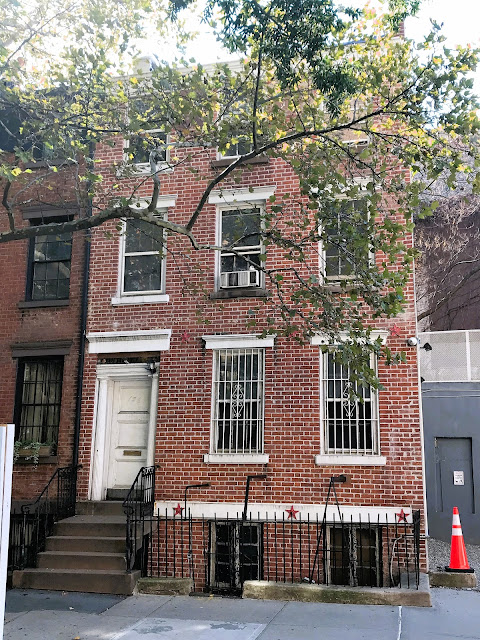 After more than 165 years as a single-family home, 136 Bank Street was converted to three apartments.  Outwardly, little has changed since James M. Renville enlarged the top floor windows in the early years following the Civil War.
photographs by the author
no permission to reuse the content of this blog has been granted to LaptrinhX.com
Posted by Tom Miller at 1:00 AM