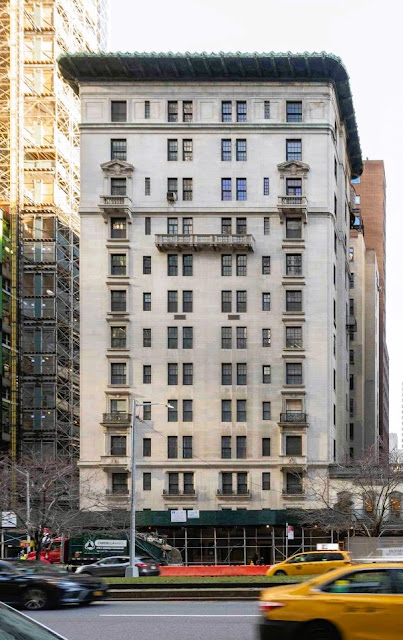 image via GDSNY.com
In the years preceding the country's entry into World War I, the stretch of Park Avenue from 46th to 57th Streets rapidly filled with luxury apartment buildings.  Their sprawling suites were intended to equal or surpass the amenities of private homes.  In the spring of 1916, prolific apartment house developers Bing & Bing prepared for another, on the southeast corner of Park Avenue and 55th Street.  Architect Emery Roth filed plans in May, that called for a 12-story brick and limestone building to cost $400,000 to construct (approximately $10.2 million in 2022).

Roth, who is remembered as one of New York City's preeminent apartment house architects, designed 417 Park Avenue in the Renaissance Revival style, with occasional stone or iron balconies at individual windows, and a four-bay wide balcony at the ninth floor on the avenue side.  The sedate design culminated in a deeply overhanging copper cornice.
Although construction would not be completed until 1917, apartments were being advertised as early as August 1916.  Some, like the 18- and 19-room apartments with six baths, engulfed an entire floor.  There were also apartments of 11, 8, and 7 rooms.  Rents for an 18-room suite were listed at $12,000 per year, or $25,500 per month by today's conversion. 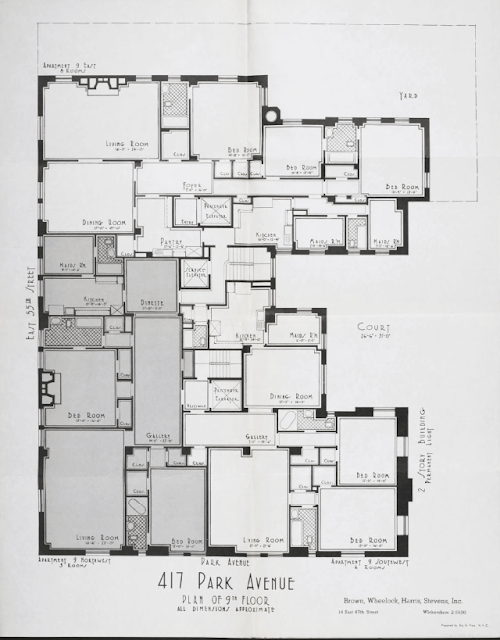 The floorplan of the 9th floor shows three apartments, the largest (at top) with separate elevator access.  from the collection of the New York Public Library
The opulent apartments filled quickly.  On January 6, 1917 the Record & Guide reported that Frederick E. Bright had taken a 12-room apartment, and two weeks later, announced that wealthy chemist Dr. Edward Goodrich Acheson had leased "a large apartment of 18 rooms and 6 baths, comprising an entire floor."  The next month,  theater owner and manager Martin Beck signed a lease for a 19-room suite.
Another of the original tenants was Henry Beekman Livingston, whose second wife, Frances Redmond, had died in 1916.  Born on Washington Square in 1854, Livingston came from some of the oldest and most socially prominent families of New York.  Not long after moving in, the millionaire broker tried his luck at love again.  On October 10, 1918, the New-York Tribune reported, "Mme. L. Duford de la Claire will be married to Henry Beekman Livingston, of 417 Park Avenue, to-morrow in the Central Presbyterian Church."
The Jules Glaenzer family were also initial tenants.  The son of the well-known art dealer and importer George A. Glaenzer,  he and his wife.  When the couple was married on February 2, 1916, the New York Herald called it "one of the largest weddings of that winter in New York society."  Five hundred guests had been invited to the reception at the home of the Edith's parents.
The residents' names appeared regularly in the society columns.  On November 11, 1919, for instance, the New-York Tribune reported, "Mrs. Thomas B. Yuille, of 417 Park Avenue, will give a reception with dancing on the afternoon of Christmas Day for her debutante daughter, Miss Burks Yuille."
But perhaps none of the early residents appeared in print more than Edward G. Acheson and his wife, Margaret Mahler.  On January 18, 1920 The Sun reported that Dr. and Mrs. Acheson would be hosting a dinner "for their daughter, Miss Jean Acheson, and her fiancé, Amelius Jarvis, Jr., at the Plaza, to be followed by a dance at 417 Park avenue." 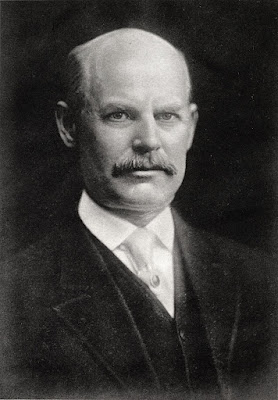 Dr. Edward G. Acheson, from The Story of Electricity, Vol. I, 1919 (copyright expired)
The Acheson apartment was the scene of another dance on January 23, 1920, the night before Jean's wedding.  The ceremony in St. Bartholomew's Church was covered in detail in the society pages.  Jean's sister, Margaret, was her maid of honor and afterward a reception was held in the Park Avenue apartment.
The Acheson's son, Jules, had married in 1916.  He and his wife, Edith, also lived at 417 Park Avenue.  The New York Herald wrote on April 27, 1921 that the friends of Edith Glaenzer "form a large circle in society."  It also noted that those friends were taken by surprise to learn that she had been granted a divorce.  "Only the intimate acquaintances of the couple, who were married five years ago, knew that they had separated."  Divorce among high society was still somewhat taboo.  Edith had taken her young son to the home of her parents at 640 Park Avenue while Jules remained in their 417 Park Avenue apartment.  Those surprised friends were no doubt shocked to further read, "'An unknown woman' was named as corespondent [sic] and it was alleged that she went with Mr. Glaenzer to an apartment in Fifth avenue."
The scandal did not necessarily damage Jules Glaenzer's social standing, at least not permanently.  On November 18, 1922 the New York Herald reported on the dinner party he gave for Lord and Lady Louis Mountbatten, saying it was one "of the largest parties" the couple had enjoyed in New York.  Among the varied guests were Manhattan social elite, like W. Rhinelander Stewart, and theatrical figures, like "Miss Mary Pickford and Douglas Fairbanks with whom the Mountbattens passed some time in California."  George Gershwin was also a guest.
The courtyard of the building became a "sylvan nook" after Herbert N. Jennings was hired as superintendent.   On July 25, 1937, The New York Times described him as "a student of horticulture for many years."  The article said, "In the midst of a wealth of shrubbery and flowing plants is a pool six feet square stocked with gold fish, miniature turtles and even a few frogs." 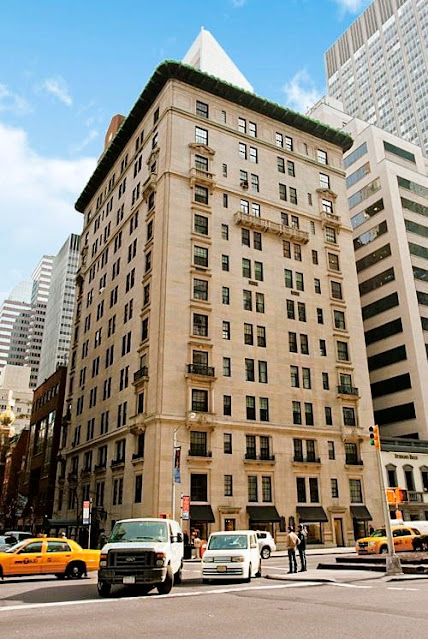 photographer unknown, via Reddit.com
In 1946 the building became a cooperative, one of the first to do so after World War II.  Purchasing an apartment around mid-century was vice president of Random House book publishers, Robert K. Haas and his wife Merle.  A founder of the Book-of-the-Month Club, he  had served as its president from 1926 to 1931.  In 1932 he co-founded the Harrison Smith and Robert Haas publishing firm, which merged with Random House in 1936.  Although he retired in 1956, he remained on the board of directors and continued to go to the office three days a week.
Well-known investment advisor Washington Dodge lived at 417 Park Avenue by the late 1960's.  He had served as the financial editor of Time Magazine from 1929  to 1933, and now was a partner in Clark Dodge & Co.  His was a noteworthy career that almost did not come to pass.  In April 1912, when he was five years old, he was returning from Europe with his parents on the maiden voyage of the R.M.S. Titanic.  Amazingly, as the luxury liner sank, all three of his family were saved.
On December 15, 1977, The New York Times journalist Virginia Lee Warren titled an article "Classy Last Holdout On the Block."  "There it is," she wrote, "the only apartment house left on Park Avenue between Grand Central Terminal and 57th Street."  At the time of her article, several of the massive apartments had been divided.  "Most of them range from six to 10 rooms, but there is one that has only four rooms and another that has five.  The 28 units include four penthouses, two of them duplexes, one duplex having three rooms, the other seven."  She noted, "[Emery] Roth, who later founded his own firm with his sons, took it for granted that there would be wood-burning fireplaces.  They still work."
But then, on June 5, 2019, Habitat magazine reported, "GDS Development is negotiating to purchase the century-old residential co-op building at 417 Park Avenue and East 55th Street for around $200 million...If the deal goes through, GDS could erect a nearly 220,000-square-foot office tower on the side."  The deal went through.  Habitat commented, "Reliable sources report that Emery Roth is spinning in his grave." 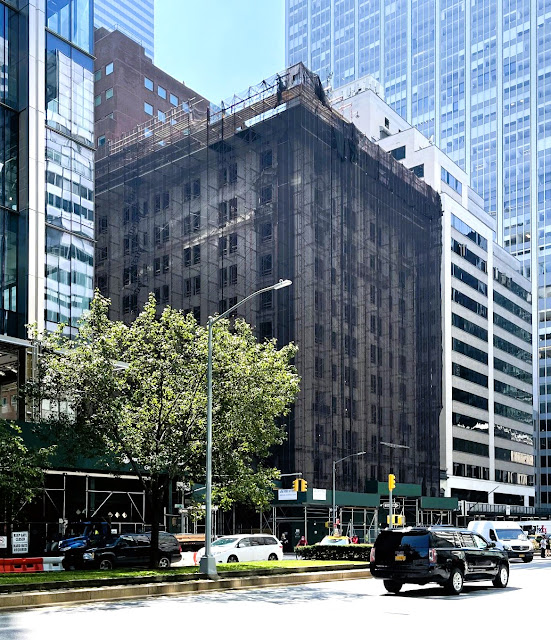 Photographer Michael Young documented the beginning of demolition in the summer of 2021.  image via newyorkyimby.com
Demolition of the venerable structure began in August 2021.
no permission to reuse the content of this blog has been granted to LaptrinhX.com
Posted by Tom Miller at 1:00 AM