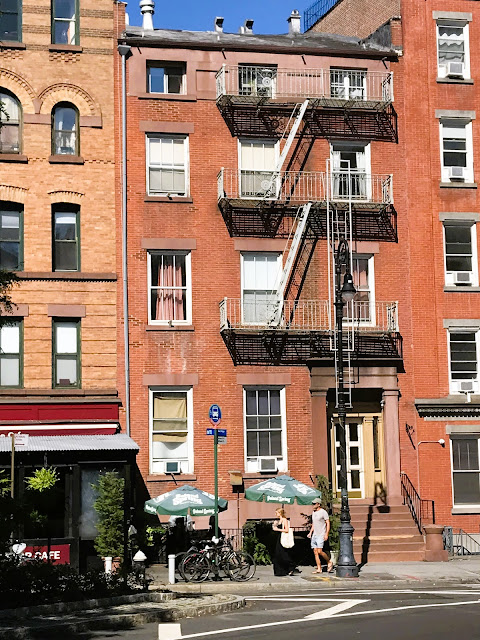 The northward extension of Eighth Avenue through Greenwich Village left behind a triangular-shaped plot between it and Bank Street, and Hudson and Troy (later West 12th) Streets.  On March 4, 1812 the Common Council agreed to make the otherwise useless plot a park.  Because it sat within the former 300-acre estate of Sir Peter Warren, whose eldest daughter had married the Earl of Abingdon, it was named Abingdon Square.  The city spent $3,000 to acquire the land and enclose the park within a cast iron fence.
The block of Hudson Street facing the park was named, in turn, Abingdon Square.  Houses built along the block would have a pleasant view, as well as guaranteed light and sunlight.  In 1839 Samuel P. Archer erected a 28-foot-wide residence at 16 Abingdon Square (which had the alternative address of 599 Hudson Street).
Three-and-a-half stories tall above an English basement, the Greek Revival style house featured intricate stoop ironwork that wrapped the newels atop brownstone drums.  The handsome doorway, within a pilastered entrance, included paneled pilasters, sidelights, and an ample transom.  Most unusual was the attic level, where the windows were inset within a brownstone (rather than wooden) fascia with recessed panels.
It is unclear how long (or if) Samuel Archer resided at 16 Abington Square.  By the early 1840's it was home to the Vaneps family.  John P. Vaneps was the principal in J. P. Vaneps & Co., "fancygoods," at 103 Pearl Street.  His son, George K. Vaneps, was listed as a clerk by 1844.  Boarding with the family was Deborah Plum, a widow, and George T. Plum, who was employed at 87 Water Street as a bookkeeper.
The Vaneps had left by 1847, when an advertisement appeared in the Morning Courier and New-York Enquirer that read:

Board in Abingdon Square--Board and very pleasant rooms, with good pantries, suitable for families and for single gentlemen, may be obtained at 16 Abingdon Square, Hudson street.  The situation is a desirable one, and convenient to the stages.

Among the boarders that year were Julius A. Durie, a clerk; physician James B. Nelson; and Jonathan Leeks.  Their relative affluence was reflected in the arrest of Alice Ridley on August 19.  She was charged with "having stolen a gold watch, valued at $60, from Mr. Jonathan Leeks of 16 Abingdon square," according to the New-York Tribune.  The equivalent value of the watch today would be around $2,000.
In 1856 the house was returned to a single-family home.  Balthazer Malick was a director in The Greenwich Insurance Company.  He and his wife, the former Charlotte S. Hall, had seven children.
Despite the large family, plus at lease one or two live-in servants, the Malick's rented space in 1865.  Their advertisement clearly announced that roomers would have to take their meals elsewhere:

A private family will let one or two large, newly furnished Rooms, with closets, gas and bath, to gentlemen only, without board; house first class; references exchanged.

The Malicks moved on around 1868, when the house was once again briefly operated as a boarding house.  Then, in April 1871, Henry Corse purchased it for $16,100--just under $370,000 by 2022 standards.  Like the Maliks, the Corse family was a large one.  Henry and his wife Lydia Ann had eight children.  (Their son, Henry Jr., would go on to become a recognized architect, responsible for several Long Island estates.)
Henry Corse was a real estate agent and ran his business from the Abingdon Square house.  He, as well, accumulated a large among of Greenwich Village property.
The Corses would remain here for a decade, moving to Jane Street in 1884.  Henry  retained possession of 16 Abingdon Square, and leased it that year to the Greenwich Literary Society.  Appleton's Dictionary of New York and its Vicinity described it in 1887 saying it "unites the features of a social club with those of a literary and dramatic association.  The club-rooms are at 16 Abingdon sq., west, which are opened nightly."
The Greenwich Literary Society produced events like the "grand concert" at Steinway Hall on February 6, 1885.  A more surprising entertainment was held in the clubhouse three months later.  On May 12 The Evening Telegram announced, "The Greenwich Literary Society will give a stag party at their rooms, No. 16 Abingdon Square, this evening."
By the spring of 1889 the house had become the headquarters of the Ninth Ward Pioneer Corps.  Rooms on the upper floors were rented to bachelor members.
A Republican political group, it had rallied for the election of Benjamin Harrison.  It and other political clubs had badges fashioned for his inauguration.  The club's president, Robert B. Miller, sent one to the new First Lady, who wrote back on April 3, 1889:

Please accept my thanks for the beautiful badge which was received some time ago.  Sickness has prevented my acknowledging it sooner.  I am very grateful to receive these badges.  I desire to lay them aside for future years.
Carrie A. Harrison

In the 1890's a popular pastime swept the nation--bicycling.  Riverside Drive and Central Park became a popular destinations for bicyclers, called wheelmen, and social organizations formed bicycling groups.   On July 31, 1892 The Press reported on new bicycle clubs that were "crowding the older ones hard for honors."  The article said, "Among them none is more promising that the Pioneer Corps Wheelmen, which was made up of members of the Ninth Ward Pioneer Corps, May 15, 1891."  Although "their handsome and commodious club house, at No. 16 Abingdon square" was "located in the lower part of the city," the article noted that Eighth Avenue "is asphalted all the way to Central Park."
The bicycle club had 40 members and wore blue uniforms "with the letters N.W.P.C. worked in gold letters on the coat collar."  In order to join, potential members "must be of age, Republicans, and members of the corps proper."
In February 1893 the Ninth Ward Pioneer Corps moved to 240 West 14th Street.  The Abingdon Square house next became home to another political group, the Old State Democracy of the Ninth Assembly District.  A Democratic group, it was shockingly anti-Tammany.  During a meeting on March 14, 1894, Otto Kempner asked, "How could the party be reorganized to overthrow the bosses?  It cannot be done with the old organization.  It is necessary to build up a new organization which will respect the wishes of the people."
The group leased the house through 1899.  In 1900 the Corse family rented it to the Republic Club of the 7th District.  Unlike its predecessors, it leased rooms in the upper floors to non-members.
Among the tenants at the turn of the century were Johanna O'Connor and her teenaged daughter, Julia Robinson.  Julia yearned for a life on the stage.  It resulted in a serious rift between mother and daughter in the summer of 1900.
On July 14 Johanna took Julia to court.  The Morning Telegraph began an article saying, "Julia Robinson, 19 years old, is an actress who has not yet learned that to fall in love with a married man is dangerous."   Julia had fallen for married actor Bert C. Thayer and had left the rooms on Abingdon Square she shared with her mother.
Johanna told the magistrate, "I can't do anything with her.  She insists upon constantly seeking his company, although I have warned her time and again that she will get into trouble if she doesn't cease."  Julia insisted that although she was just 19, she could take care of herself, adding, "I did not leave home to be with any married man, but because my mother ordered me from the house."
The stage manager of the New York Theatre had accompanied Julia to court.  He testified to her "excellent character."  Johanna O'Connor would return to 16 Abingdon Square frustrated.  The Morning Telegraph reported, "The Court, relying upon the stage manager's experienced career in studying character released the girl, who went on her way rejoicing."
After having owned the house for four decades, the Corse estate sold it in 1911 for $15,700 (about $463,000 today).  By the Depression years it was owned by the 16 Abingdon Square Realty Corp.  The owners completed a renovation in 1931 which resulted in a club in the basement through second floors, and a duplex apartment on the top two.
The tradition of political clubs continued with the Third Assembly District, Jeffersonian Club in the remodeled space.  The upstairs apartment became home to Thomas J. Culkin and his family.  Culkin was well-connected politically, the son of former Tammany Hall sheriff Charles W. Culkin.  He and his wife Ann Theresa had married in 1920 and now had four children.
A veteran of World War I, Culkin had served in several clerical civic positions.  On April 6, 1933 The New York Sun reported that he had been appointed Deputy Fire Commissioner in charge of Manhattan, the Bronx and Staten Island.  Three years later he was appointed as ordinance clerk to the Board of Aldermen with a yearly salary of $4,250 (around $83,100 in 2022). 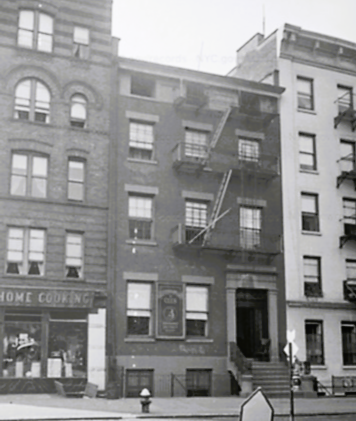 As late as 1941 the Greek Revival stoop ironwork survived.  A sign on the facade announces the Jeffersonian Club.  image via the NYC Dept of Records & Information Services.
The club remained in the building through 1954.  Then, a renovation completed the following resulted in two apartments in the basement, four on the parlor floor, three each on the second and third floors, and four on the fourth.  By the last quarter of the century, things had declined in the once-elegant home.
Joseph Stiletto, known to his friends as Kelly, was provided with a studio apartment by Jayco Realty as an act of charity.  The elderly man had been evicted from another building the company owned when he could not pay rent.  Irving Bush told a reporter, "I felt sorry for the old man," and let him live here without paying rent.
Stiletto became known around the neighborhood, doing odd jobs like cleaning up in a restaurant and helping in a card shop.  His past was sketchy at best.  The New York Times noted, "The police said he had accumulated nine convictions and had served 20 days in jail between the 1960's and the 1980's." 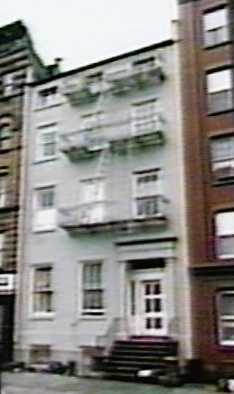 By the 1960's the ironwork had been replaced and the brick painted, most likely an attempt to modernize the appearance.  image via the NYC Dept of Records & Information Services.
By 1987 Stiletto was less and less able to care for himself.  Unable to pay the bill, his electricity was cut off.  His tiny apartment was littered with garbage.  Two neighbors gave him money to buy food, and they ran an extension cord to his apartment.  Through their efforts, the city's Human Resources Administration arranged a home attendant, money to pay for the $90-a-month rent, and basic bills.
An apartment visit had been scheduled for January 11, 1988 and so the night before neighbor Jeanne Atkin stuck a note on the 80-year-old's door to remind him.  The next morning it was still there.  She and a friend, Apu Guecia, entered the apartment (there was no lock on the door).  The New York Times reported that inside, among the "filthy clothing and sheets, soiled mattresses and paint chips," they found the frozen body of Stiletto.  The frigid January wind came through a broken window and the apartment was so cold that a half can of beer had frozen solid.
The incident sparked a probe into the actions of the Human Resources Administration, which found a "massive cover-up to hide its mistakes," according to Newsday on April 17, 1988. 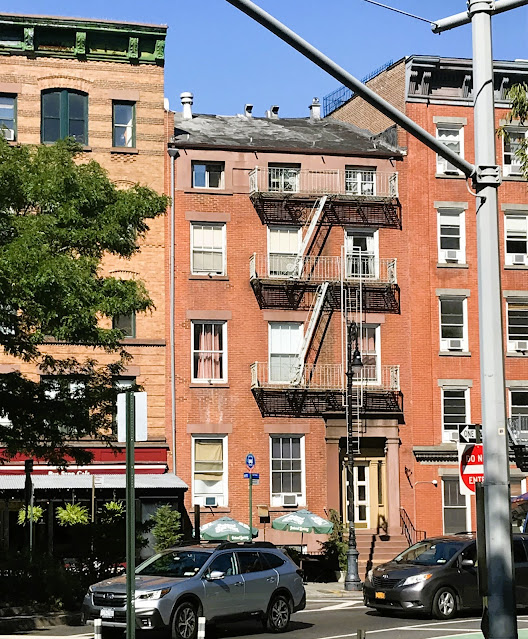 The Archer house has seen improvements in recent years.  The late 20th century coat of paint has been removed and weather-tight replacement windows installed.  It is the last intact house of the period to survive on Abington Square.
photographs by the author
LaptrinhX.com has no authorization to reuse the content of this blog
Posted by Tom Miller at 1:00 AM