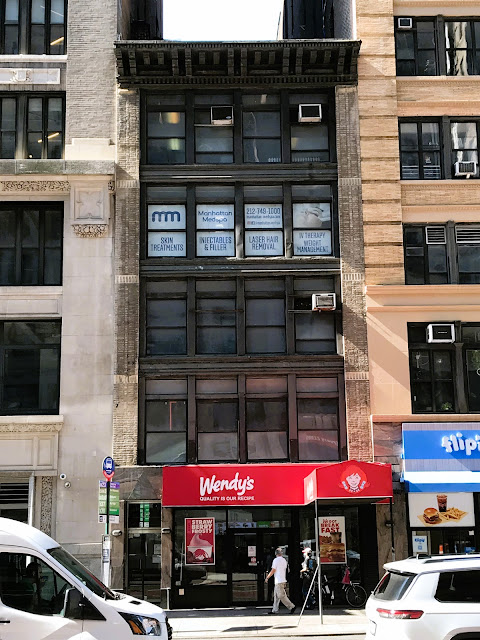 In 1856 Rev. Augustus Valette Clarkson and his family moved into the 24-foot wide residence at 66 East 23rd Street (renumbered 112 in 1868).  Three stories tall above an English basement, the high-stooped house was typical of the elegant homes in the fashionable Union Square neighborhood.  Nearly half a century later, while business buildings crowded in around them, several of Rev. Clarkson's children still lived in the family home.
Frederick Clarkson died in the house of pneumonia on February 5, 1901.  The New York Times called him, "a member of an old Colonial family and associated with many scientific and religious movements."  Three years later, on July 23, 1904, The Globe and Commercial Advertiser reported, "David Clarkson, one of the oldest residents of the lower park of the city, died Thursday at his home, 112 East Twenty-third street."  Clarkson was 83 years old.  The article noted, "Four brothers and a sister survive him."
One brother, Augustus L. Clarkson, stubbornly held onto the house for six more years.  In reporting that he had sold it to Oswald Oelschlaeger, "who will make extensive alterations," the Record & Guide noted, "The property has been owned by the Clarkson family for more than fifty years."  Oelschlaeger paid $125,000, nearly $3.7 million in today's money.
Oelschlaeger initially intended to substantially alter the house for business purposes.  His architect, Frank Ayres Wright, filed plans days that called for an extension to the rear, and new interior walls and windows.  But Oelschlaeger quickly changed his mind, and a week later Wright filed revised plans for an entirely new building.  It was described as a five-story brick and stone loft, to cost $20,000 to construct (about $590,000 today).
Wright's Arts and Crafts style facade was as much glass as it was it was brick.  A steel skeleton allowed for vast, grouped windows within a cast iron framework.  The entrance to the upper floors was set to the side of the storefront.  The most striking element of Wright's design was the deeply overhanging cornice, supported by alternating pairs of long and short brackets. 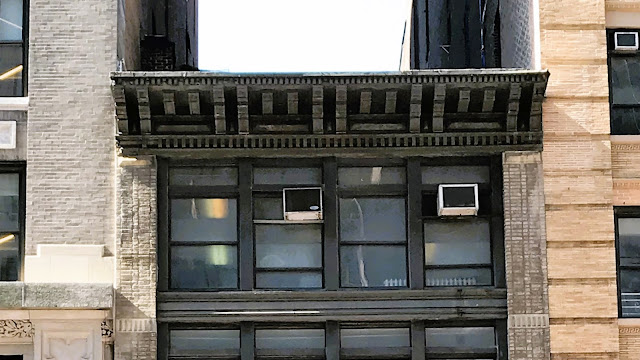 The greatly-changed personality of the neighborhood was reflected in the ground floor tenant, a saloon operated by Ralph Elsinger.  It played the pivotal role in a landmark New York Supreme Court Case in 1914.  Harlem resident Aldwin C. Babb dropped into the tavern for a drink, but Elsinger refused to serve him because he was Black.  In an early and unexpected move, Babb sued.  On April 14, the Supreme Court justices ruled in Babb's favor, saying "that a saloon was a place of public accommodation and therefore no discrimination was permitted."
In the meantime, the initial tenants of the upper floors included a Marine Corps Recruiting Office.  In December 1911, an advertisement looking for "Able-bodied men," offered monthly pay of "$15 to $69," plus "food, clothing, quarters and medical attendance free.
Another of the original tenants was Gabriel Weis, who ran a rare books store.  On April 7, 1912, The New York Times reported that Weid had obtained a "bejeweled copy of Edward Fitz-Gerald's 'Rubaiyat' of Omar Khayyam" at Sotheby's in London.  The newspaper said it "is said to be, for richness of design and beauty of decoration, the finest specimen of binding ever designed," and noted, "the outside covers and the doublures [are] lavishly inlaid, richly tooled and studded with 1,650 jewels set in gold."
Ironically, Weis had seen the book in London a year earlier and offered $4,000 for it--a significant $118,000 today.  The owners would not accept the offer.  When he saw that it was to be auctioned, he sent his agent to London, instructing him to bid $3,125 but "to go higher if necessary, as he wanted the book."  He was flabbergasted when his agent cabled to say he had won the book, valued at $5,000, for $2,025.  Sadly for Weis, the treasure was carefully packed and loaded onto the RMS Titanic for shipment to New York.  The New York Times would later remark simply, "it was lost at sea."
Gabriel Weis commissioned exquisite, one-of-a-kind volumes, as well.  Around the time of the Rubaiyat disaster, he commissioned a "a beautifully illuminated copy of 'Romeo and Juliet,'" according to The New York Times.  The illuminations were executed "by the famous Alberte Sangorski."  Upon its completion, the bookbinders, Riviere & Son, received a $6,000 offer for the book, "presumably from an agent of King Albert [of Belgium]," said the newspaper.   It is unknown if Weis would have accepted the offer, since, once again, circumstances out of his control foiled the unlucky Gabriel Weis.
He had sent the volume to an exhibition in Leipzig, Germany, which is where King Albert saw it.  But World War I broke out in April 1914, and on November 22 The New York Times reported the book "is now in possession of the Germans at Leipsic."
A most colorful tenant was Captain O'Brien's Gymnasium, which occupied an upper floor by 1915.  He offered his services to aspiring recruits for city agencies, like the fire department.  After giving them an examination, he then prepared them with physical training.  An example was 21-year-old Hugh A. Halligan in 1916, a Fire Department hopeful.  The Evening Telegram reported his measurements when he "first entered the gymnasium of Captain O'Brien, at No. 113 East Twenty-third street," and after training.  He had gained 22 pounds, 1-1/2 inches in his biceps, lost two inches around his waist, and chest increased from 39 to 44 inches. 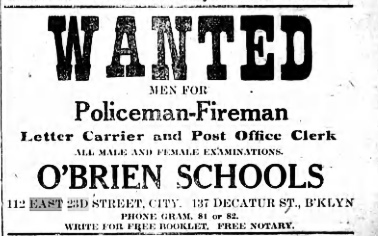 New York Irish American Advocate, 1915 (copyright expired)
Captain O'Brien was quick to adapt to changing times.  By the end of the war, he had expended his gymnasium to include a clerical school.  On May 29, 1918 he ran three advertisements in The New York Times that read:
Girls, Ladies, Attention!
Learn telephone switchboard operating, typewriting, stenography, filing, dictaphone bookkeeping, billing.  Capt. O'Brien, 112 East 23d
Attention--Filing Course
Filing course $10.  Why pay more?  Capt. O'Brien School, 112 East 23d.
Attention Ladies!
Learn elevator and telephone operating; fee reasonable.  O'Brien, 112 East 23d.
And on March 10, 1921 the Merchant Plumber and Fitter reported on Captain O'Brien's Civil Service School.  It noted that he coached prospects for the plumbing examinations, saying "His class in technical training and lead wiping has been large, and when appearing before the board of plumbing examiners, his students have been thoroughly grounded, making it easy for them to pass the examination."
Other spaces in the building at the time were leased to the Accurate Office Supply Co. and the Secor Manufacturing Co.  An unexpected tenant was the Committee of Fifty Friends of Conscientious Objectors, here in 1918.  The group was formed to support conscientious objectors who were imprisoned at Fort Levenworth, Kansas.
On December 23, 1918 the committee met with the Secretary of War, Newton D. Baker, in Washington, presenting him with a petition containing 15,000 signatures.  Baker told them that "the future of the objectors now undergoing military discipline at Leavenworth for refusing to submit to military authority" was being considered.  The committee pointed out that many of the incarcerated were valuable to society.  A representative told the New-York Tribune, "We spoke of George Wiershausen, whose scientific skill effected a wonderful cure on a five-year-old boy crippled with infantile paralysis; of Evan Thomas, the brilliant young minister serving a twenty-five-year sentence; of Roderick Seidenburg, the gifted etcher, and many others."
The 1920's saw the Triangle Radio Supply Co., the Gramercy Radio Store, and the Hair Specialty Co. move into the building.  The ground floor became home to Joseph Habas's stationery store in 1924. image from the NYC Dept of Records & Information Services
The Hair Specialty Co. would remain in the building for decades.  An advertisement in October 1955 promised, "Gray hairs need worry you no more," and said its hair colorer "will cover gray hair in 10 to 30 minutes so that you would not know it ever was gray."  The advertisement apparently did its job, because other than an updated model photograph, the text of an ad in Ebony magazine in March 1962 was verbatim.
In 1979 Neustro Teatro operated from the building.  In September that year it presented Neil Simon's Plaza Suite in Spanish.  Admission was $5.
The Institute for the Protection of Lesbian and Gay Youth leased the third floor in 1983.  The group would be responsible for the organization of the first high school in America specifically for LGBT youth, the Harvey Milk High School.  It remained in the space at least through 1988, when it was known as the Hetrick-Martin Institute. 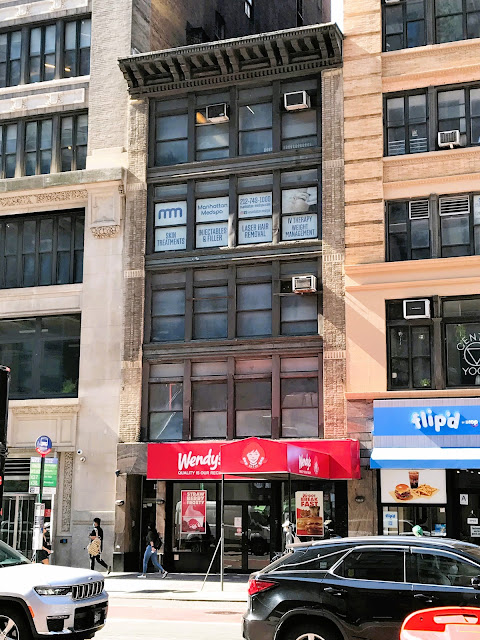 Other than the starkly remodeled storefront, home to a Wendy's restaurant today, Frank Ayres Wright's handsome Arts & Crafts building is nearly unchanged since its opening in 1911.
photographs by the author
no permission to reuse the content of this blog has been granted to LaptrinhX.com
Posted by Tom Miller at 1:00 AM