The Queen Anne Holdout at No. 406 West 52nd Street 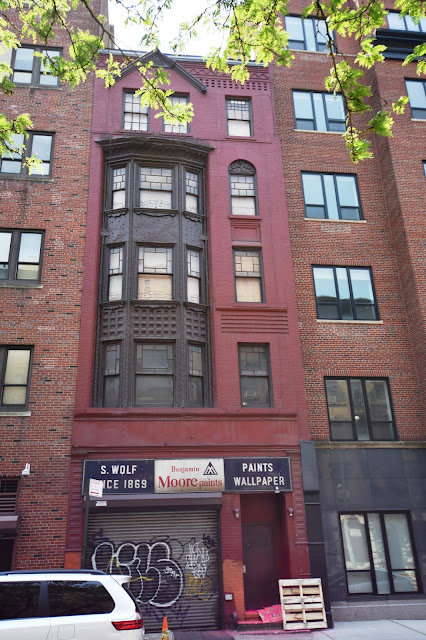 In 1861 nine-year old Adam Huston came to New York from County Derry, Ireland, with his parents.  At the time the Hell’s Kitchen neighborhood had filled with poor Irish immigrants who had fled the Irish Potato Famine and were attracted by work on the docks and Hudson River railroad.  Another Irishman, John Cassidy lived there in a two-story wooden house and store at No. 406 West 52nd Street.  Cassidy, a native of Slane, County Meath, died in the house on Thursday, November 4, 1869 of typhoid fever.

In the meantime, Adam Huston attended public schools.  He then went immediately into the plumbing business and, according to A Standard History of Freemasonry years later, applied “himself with determination to learn all its details, and succeeded so well that it was not long before he was recognized as being ‘as good as a journeyman.’”

In fact, he was so successful that in 1882 he partnered with another Irish-born plumber, James R. Corbitt, to form Huston & Corbitt Co.  Within five years the men had established their firm as one of the leading plumbing contractors in the city, and laid plans to construct their own business building.

On December 28, 1887 they took title to the old frame house and store once home to John Cassidy.  Despite the gritty neighborhood, the property cost the plumbers $5,000—about $130,000 in 2016.  They commissioned architect C. Abbott French to design a multi-purpose building on the site; one both commercial and residential.

C. Abbott French & Co. was responsible for scores of rowhouses and other buildings in Manhattan.  Earlier that year French had designed a remarkable row of 12 Queen Anne style residences on East 95th Street.  For Huston and Corbitt the architect turned to the same style on a less grand scale.

C. Abbott French filed plans on January 27, 1888 calling for a brick “dwelling and store” at a cost of $12,000.  The delightful structure was completed within the year—five stories of brick, iron and terra cotta like nothing else in the neighborhood.   Huston & Corbitt Co. would operate from the ground floor “store” space; while the upper floors were residential, including one two-story apartment.

French’s design had striking similarities to architect C. P. H. Gilbert’s four-story apartment house at No. 348 West 23rd Street completed about a year earlier.  A three-story angled bay of pressed metal included rope-twist colonnettes, a panel of honeycomb design and one of scattered nubs, leaded transoms, and a foliate cornice influenced by the Aesthetic Movement.   Atop the bay a delicate, lacy cast iron cresting sat like a diadem.  French saved Huston & Corbitt money by executing much of the decorative detail in brick.   At the top floor, for instance, he repeated the honeycomb motif, created a corbel table and a layered cornice all in brick.  A whimsical false gable in cast metal at this level provided a cottage-like feel.

Before long the relationship between Huston and Corbitt moved from professional to familial.  On April 30, 1889 Adam Huston married Annie Corbitt and the newlyweds moved into the two-story apartment at No. 406 West 52nd Street.  Rather surprisingly, C. Abbott French also lived in the building until around 1904; and William Truitt Godfrey, a notary public, was here at least from 1896 through 1900.

Huston & Corbitt Co. continued to thrive.  In 1901 the company was awarded the contract to install the plumbing in the huge Ardsley Hall apartment building on Central Park West and 92nd Street.  Interestingly, an inspection by the State of New York that year showed only three full time employees—the third most likely was a bookkeeper or other office worker.  The army of plumbers it would take to fulfill a project like the Ardsley Hall commission were apparently hired as contract workers.

By 1906 Adam and Annie Huston had four children—Mabel, Walter, Ethel and Amy.  One of the upstairs apartments was now being rented by Dr. Alan G. Terrell and his wife, Estelle.  But things in the Terrell household were not going as well as within the Huston family.

In 1906 Estelle sued Alan for divorce through lawyer George W. Case.  Case was a personal friend of both parties.  The doctor felt divorce was unnecessary and that things could be worked out.  He went to Case’s office at No. 35 Nassau Street, and asked him to arrange for a meeting with his wife.

Estelle never showed up at the arranged appointment.  Later, Case told Dr. Terrell that “his conduct had been such that he could not advise any reconciliation.”

Confused, Alan Terrell became suspicious and had Estelle followed.  He discovered that she and George Case were spending “most of their time together.”   On August 21, 1906 Dr. Alan Terrell filed a counter suit for divorce, as well as a $50,000 suit against George W. Case for alienating his wife’s affections.  The hefty amount for damages would be equal to about $1.4 million today.

On Wednesday, October 2, 1907, Adam Huston began feeling ill.  Within an hour and a half the 55-year old was dead from pneumonia.  His funeral was held at No. 406 West 52nd Street three days later.  In reporting his death, The Plumbers Trade Journal called him “one of the old-time master plumbers.”

Annie and the children remained in the building for at least a few years.  Mable received her training license as a school teacher in 1909.  And James R. Corbitt continued to operate Huston & Corbitt Co. from here under the old name, at least through 1918.

But by 1923 both the Huston family and the plumbing business were gone.  That year the Prescott Realty Company sold the building to an investor.  It was described at the time as a “five-story tenement.”

In 1929 architects Van Wart & Wein were hired to connect the building internally with No. 771 Ninth Avenue.  Simultaneously the second floor was converted to an office for the ground level store, and the third and fourth floors to a single “housekeeping apartment” (meaning there was a kitchen included).  The top floor became furnished rooms.

The apartments were divided in 1959 to two per floor, including the fifth floor.   It was most likely around this time that S. Wolf opened his paint and wallpaper store in the old Huston & Corbitt Co. space. 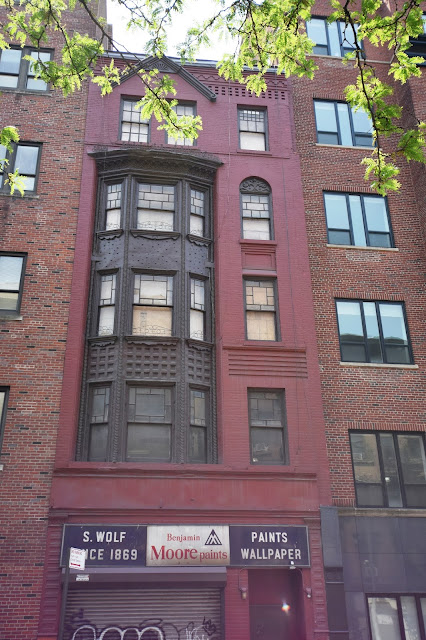 The paint store continues to operate at No. 771 Ninth Avenue.  But in 2011 the Department of Buildings closed No. 406 West 52nd Street for building violations.  Now vised between unexciting modern brick buildings, its survival was a fluke, resulting from the mid-century connection to the Ninth Avenue building.  Today C. Abott French’s Queen Anne relic is painted barn red; yet its delightful design is mostly intact.

photographs by the author
Posted by Tom Miller at 12:10 AM