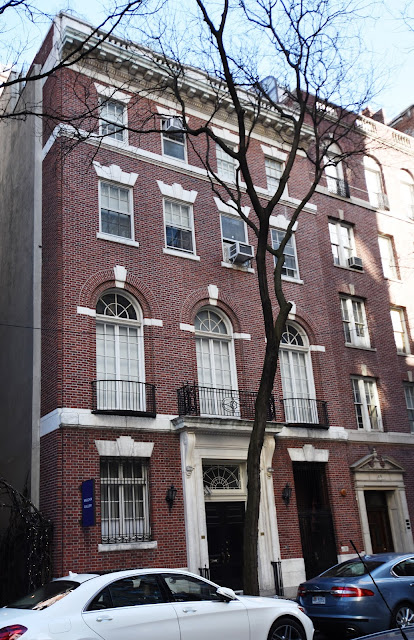 In 1902 the first bricks were laid in the construction of architect Cass Gilbert’s masterful Alexander Hamilton U.S. Custom House at No. 1 Bowling Green.  In stark contrast to its majestic Beaux Arts design was the architect’s home at No. 45 East 78th Street which he purchased that same year.

The Victorian brownstone, built just after the end of the Civil War, had been home for years to well-to-do cigar importer Emanuel Max Heimerdinger.  At 16-feet wide it was a comfortable but unpretentious dwelling.

While Gilbert was living here and designing some of the nation’s most impressive buildings, 34-year old attorney Albert Rathbone was making a name for himself.   A graduate of Williams College, he had earned his law degree at the Albany Law School in 1889.  In 1901 he was made a partner in the firm of Butler, Notham, Joline & Mynderse. In 1903 he and his wife, the former Emma Marvin Olcott, purchased the old house at No 130 East 60th Street from Henry P. Goldstein.

A decade later, in the spring of 1913, Cass Gilbert and his wife were gone from East 78th Street.  Rathbone purchased their former home and the one next door at No. 47.  Just two years earlier Rathbone had commissioned Arthur C. Jackson to modernize his 60th Street house with new windows and toilets.  Now he brought the architect back for a much more substantial project.

The two old rowhouses were demolished and in their place Jackson designed a handsome, neo-Federal residence which drew its inspiration from the New York City houses of the first years of the 19th century.  Faced in variegated Flemish bond brick, its centered, double-doored entrance was framed in marble.  A delicate fanlight set within a rectangular transom admitted light.  Elegant arched French windows opened onto miniature iron balconies at the second floor.  Splayed marble lintels dignified the upper openings; and a handsome balustrade of alternating solid and open panels crowned the cornice. 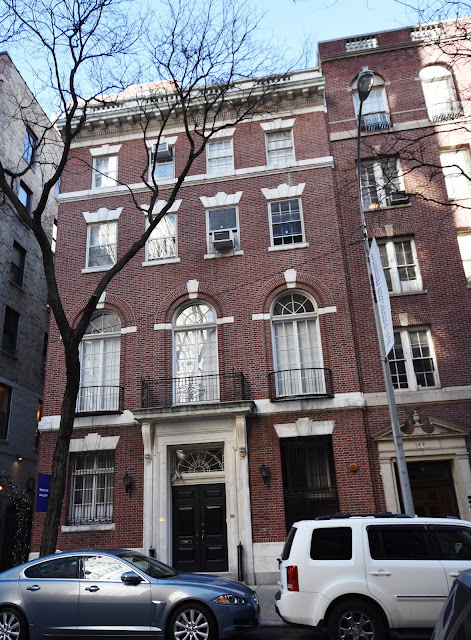 Perhaps the scale of the $80,000 project confused the reporter for the Real Estate Record & Builders’ Guide.  When the journal announced that Jackson had filed plans on April 26, 1913, it called the building a “four-story brick tenement.”  Two months later, on June 7, it corrected itself when reporting that the Edward Corning Co. had won the contract to erect the “residence.”  In those two months the cost of the mansion had risen to $100,000—around $2.5 million in 2016.

Somewhat surprisingly, when the house was completed in 1914, the Rathbone family did not immediately move in.  Instead, in November, it was leased to William H. Hamilton for the season.  That may have had to do with the Rathbone’s extensive travel at the time.  With his practice focused on railroads, in 1913 he was immersed in the reorganization of the St. Louis & San Francisco Railroad; and in 1914 the reorganization of the Missouri, Kansas & Texas Railway Company, the Pere Marquette Railroad, the Detroit United Railway, among other large corporations.

Nevertheless, Albert, Emma and their two daughters, Grace and Anna, were firmly settled in the 78th Street mansion in time for Anna Talcott Rathbone’s debut into society.  On December 28, 1915, Emma gave a tea dance in the house, followed by a dinner and theater party.

When war broke out in Europe many society girls threw themselves into war relief work.  Grace Olcott Rathbone traveled to Paris in 1916 to serve in the American Ambulance Hospital.  She was still there on July 8, 1917 when her parents announced her engagement to Charles Ferriday Neave.   Only six days later the engagement of her sister Anna was announced.  Like Charles Neave, Anna’s fiancé, Robert Livingston Johnson, was assigned to an Officers’ Reserve Training Camp.

Robert Livingston Johnson had attained the rank of Lieutenant when he receiving his orders in August 1917 to ship off to Europe.  The plans for a society wedding were suddenly disrupted.  The couple was married in the 78th Street house on August 20; The Sun noting “The wedding was hurriedly arranged, as the bridegroom is under orders for foreign service.”  Grace’s fiancé, also a Lieutenant now, stood in as Robert’s best man.

He entered the Treasury Department in January 1918 and for the next two years 78th Street would see little of the Rathbones.  On May 25, 1918 he was appointed to the Treasury’s War Loan staff; and was made Assistant Secretary of the Treasury and put in charge of the Foreign Loan Bureau on September 4.

Following the end of the war, President Wilson sent Rathbone to Europe on October 2, 1919 “as financial adviser to the Peace Mission,” as stated in The New York Times.  Still the Assistant Secretary of the Treasury, he represented the United States within the international Reparation Commission until April 1920.  He resigned his Government position in June 30 that year.

Grace’s marriage to Lt. Charles Neave had never come to pass.   The Rathbones were still living at No. 45 East 78th Street when she married the Harvard-educated attorney Leonard Dawson Adkins on September 29, 1923.  But the family would be gone from the mansion within the decade.

The address which had been associated with one of America’s foremost architects would be so again when broker George Browne Post and his wife moved in.  A founder of the firm Post Flagg, he was the son of eminent architect George Browne Post—responsible for some of Manhattan’s most familiar structure like the New York Stock Exchange, the New York World Building (once the tallest building in the world), and the old New York Post Building.

Post and his wife, the former Julia James Smith, maintained a country estate in Bernardsville, New Jersey, and entertained lavishly in the 78th Street house during the winter season.   The banker died on May 25, 1937 leaving an estate of over $1.5 million.  The end of the line for No. 45 East 78th Street as a single family home came soon thereafter.

Julia Post leased the house to Finch Junior College for several years until she sold it in July 1942 to the Jesuit Missions.   In reporting the sale on July 17, The Times mentioned that it was assessed at $127,000.

When the Jesuits sold the house in 1966 Finch College returned.  In 1967 the Rathbone mansion received a massive interior renovation that reflected the needs of the institution—such as the television room on the second floor, along with offices, study rooms, dormitory and dressing rooms, and a tenants’ laundry room.

The house was sold in 1976 to the Institute for the New Age which operated the Center for the New Age here until around 1992 when the C & M Arts gallery moved in.  The mansion would continue being used as an art gallery for years, successively the L&M Arts gallery, and the Mnuchin Gallery in 2013 (Robert Mnuchin was the “M” in C & M Arts and in L&M Arts).  In 2009 Mnuchin had once again renovated the house, creating gallery and office space on the first three floors and a duplex apartment in the top stories.

From the sidewalk, however, the elegant neo-Federal mansion is essentially unchanged since its completion in 1914.