Church of Our Lady of Sorrows -- 105 Pitt Street 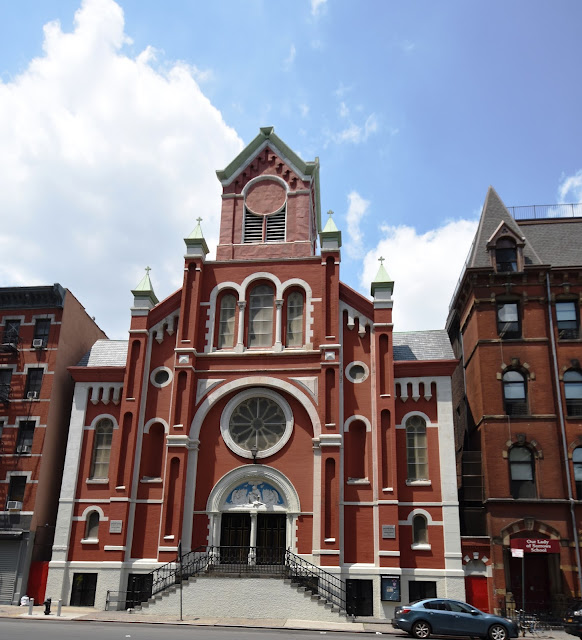 Political and social unrest in the German states prompted thousands of immigrants to settle in New York City beginning in the late 1840s.  By 1855 only Berlin and Vienna had larger German-speaking populations.  The new citizens clustered on the Lower East Side, creating what would become known as Kleindeutschland, or Little German.

In 1857 Rev. Bonaventure Frey, a Capuchin priest, founded the Church of Our Lady of Sorrows for the German Catholics.  Thirty years later The Evening World would comment “In those years immigration had begun to increase to such an extent that its effect was very appreciable, especially in the east side district.”  Rev. Frey’s new congregation was original an offshoot of St. Mary’s Roman Catholic Church.  The New York Times later remembered “the first parish mass was said in a billiard room at 121 Pitt Street.”  But within a decade its separation from St. Mary’s was authorized by Archbishop Mc Closkey “who saw and appreciated the needs of the German Catholics in that part of the city,” as explained by The World.

Three lots were purchased on Pitt Street, just off the corner of Stanton Street, in 1867 and German-born architect Henry Engelbert was hired to design a permanent church building.  The cornerstone was laid on August 15, 1867.  Completed in 1868, the structure exhibited a jumble of styles, the effectiveness of which can easily be argued.

A split staircase let to the paired entrance doors nearly a story above street level.  Romanesque arches, Gothic corbels and a square, somewhat stumpy bell tower joined with various niches and openings to create a dizzying visual display.  The Evening World called it “a handsome structure of the Byzantine style.”

On Sunday, September 6, 1868 Archbishop John McCloskey dedicated the new church, which was capable of seating 1,200 worshipers.  Apparently not overly-impressed, the New York Herald gave the event a single sentence.

The newspaper was more moved six months later when the organ was dedicated on April 30, 1869.  It was built by Felix Barckhoff, who had arrived in American from Westphalia, Germany just four years earlier.  The Herald remarked “This pretty little church, in Pitt Street, was crowded to its utmost capacity last night.”  The evening featured several choral groups “with several well known artists,” and solo performances on the instrument.

The New York Herald deemed the organ “a genuine novelty and success, the solo stops being true to their orchestral original and the mixture being of an entirely different quality from what we have heard on other more pretentious organs.”  The article summed up the evening saying “Few churches in this city presented such a brilliant appearance last night as that of Our Lady of Sorrows.”

While the church was widely known for its German congregation; the funerals of Irish immigrants were frequently held here; possibly because the deceased had no church of their own.  In October 1873, for instance, the funeral of Mary Ronan, “wife of Michael” was held at Our Lady of Sorrows.  She was a native of Limerick, Ireland.  And two months later Patrrick McGill’s funeral was held in the church.  He had come from County Donegal.

Connected to the church was the Capuchin Convent, also founded by Rev. Frey.  And in 1874 a new school building was completed on the corner of Pitt and Stanton Streets, next door.  On December 14 that year the church ladies staged a “grand fair” in the hall of the school to offset the construction costs.  Church fairs were a common means of fund-raising in the 19th century; and The New York Herald promised “a number of tables well covered with objects of art and virtu will surround the spacious hall, and tasteful draping depend from the walls and ceiling.”

The newspaper reported that shopper could find articles “some of great value and rare curiosity, and there is little doubt that with the efficient corps of lady attendants the fair will be an entire success.”

By the 1890s another immigrant group, the Italians, was edging into Little Germany.  Although services in Our Lady of Sorrows were still celebrated in German, the new arrivals often dropped into the open church to pray.  One of these was Michael Marricini, who stopped in on the afternoon of November 23, 1893.

Many residents of the surrounding tenements struggled to survive; and unexpected babies could be a significant financial hardship.  There was no better place than a church to leave an infant which its parents could not afford to care for.  As Marricini knelt in the silence of the church, he heard “a feeble wail.”  The New York Times reported the following day “In a seat near his he found a girl baby, about a month old, which had been abandoned.”

A slip of paper was on the pew near the infant, on which was written “Anna Skimbaer, Katolik.”  The little girl was wearing a polka dot dress.  Little Anna was taken to Police Headquarters.

In the summer of 1899 the 30-year old building received a make-over.  A sculpture by Joseph Sibbel, representing the Blessed Virgin holding the dead Christ was installed over the doorway.  Eleven feet long and six feet high, the beautiful work of art filled the lunette above the entrance.  Inside the church the lantern received eight mural paintings by William Lamprecht.  The New York Times reported in August that “The entire church is being modernized and decorated.”

By 1913 the number of Italian congregants prompted Rome to send two Italian priests to Our Lady of Sorrows.  In a rather bigoted remark The Fortnightly Review reported in 1917 that they “now conduct regular services for the Italians on Sundays and holydays in a church which was built by and for Germans, and once entirely devoted to their needs…This fact shows once again that many of our Italian immigrants can be saved or regained for the faith if earnest and intelligent efforts are made in this direction.”

The Fortnightly Review was congratulating Our Lady of Sorrows on its 50th Anniversary.  In doing so it went on to insult another group—the Jews.  Pointing out that a change in the complexion of the neighborhood “is owing to the Jewish invasion of the lower East Side, which set in about 1879 and has not yet reached its climax,” the article worried for the fate of the Pitt Street church.  “It is to be hoped that this ‘invasion’ will not ultimately convert Our Lady of Sorrows Church, once German, now practically Italian, into a Jewish synagogue.”

Twenty-five years later, when Our Lady of Sorrows celebrated its 75th Anniversary, The Fortnightly Review would have been pleased to see that the services were still Roman Catholic, and still being conducted in German and Italian.  The church built to accommodate 1,200 people, however, had less than half that many.  The New York Times was diplomatic in reporting “Many descendants of the original German families and the early Italians were present yesterday among the 500 persons who thronged the little church.”

The neighborhood continued to change and Our Lady of Sorrows adapted to meet the needs of its new congregants.  By March 10, 1966 when the basement of the church was used for a meeting of the Committee of Welfare Families of the Lower East Side, English and Spanish had replaced German and Italian. 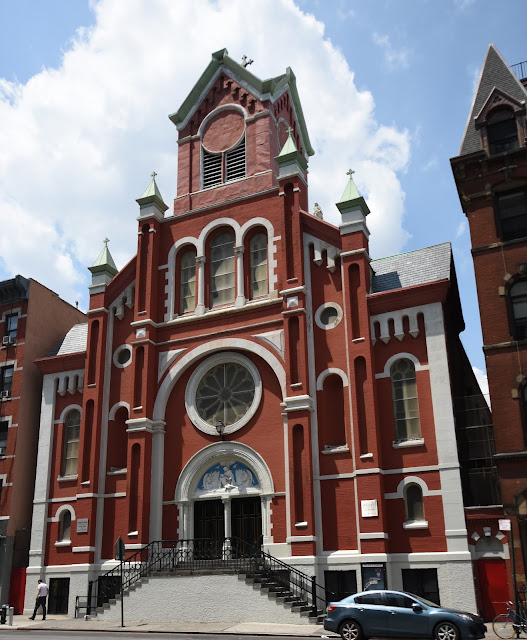 Today, other than an ill-advised coat of paint over the brick, Henry Englebert’s church is little changed since it opened in 1868.  Now known also as Nuestra Senora de los Dolores, it offers masses in Spanish as well as English.  And it continues to serve the newcomers to America as it did nearly 160 years ago.