Jacobus Hendricksen de Kype was born in Amsterdam on May 16, 1631, just four years before his family came to America.  At just 16 years old he was a clerk in the New Amsterdam Provincial Secretary’s office, and by December 1649 was acting clerk in Peter Stuyvesant’s Council.

Kip resigned that post in 1657 to devote himself to the brewing business and maintaining a general store.  Although he was prominent in the attempted resistance against the British in 1673, he was appointed to work with the victorious English to restore order; one of six of “the wealthiest inhabitants, and those only who are of the Reformed Christian Religion" so chosen.

Kip adapted well.  In 1668 he was commissioned a Lieutenant of the city militia by Governor Lovelace.  He was described by a contemporary as “a young man of spirit and intelligence, tall, handsome and extremely popular.”

On March 8, 1654 Jacobus, who by now went by the anglicized name Jacob Kip, married Maria De La Montague.  They initially lived in Kip’s house on the south side of Stone Street.  In 1660 he purchased a larger residence on De Princes Graft (Broad Street).

Wealthy New Yorkers maintained summer estates with extensive gardens where river breezes relieved the heat.  Immediately after his marriage Jacob Kip purchased “a suburban plantation of some 150 acres on the road running towards Kingsbridge, about 4 miles from the City Hall,” according to Frederic Ellsworth Kip later.  The estate was known as Kip’s Farm and abutted the Murray Hill estate of Robert Murray to the west and the Beekman estate to the north. 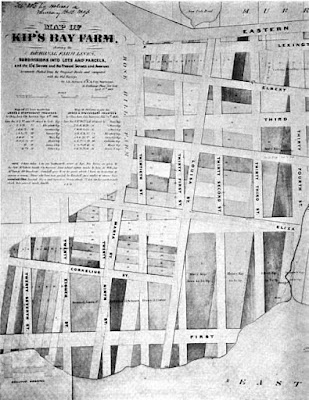 Within a year, by 1655, Kip had completed a house on the property at what is today approximately Second Avenue and 35th Street.  It faced the wide bay on the East River, which earned the name Kip’s Bay.  In his History of the Kip Family in America Frederick Ellsworth Kip described it as “a double house built of small yellow bricks imported from Holland, with a wing almost as large as the main building, and a steep peaked roof surmounted by a weathercock.  Over the door was the Kip arms sculptured in stone, and on the gable the date of its erection.”

In 1894 historian John J. Post noted “Parts of it were rebuilt in 1696…On the right hand of the hall was the dining-room, running from the front, which faced the river, to the rear, with two windows looking over the bay and two over the country on the other side.”

Jacob and Maria (who also anglicized her name to Mary) had 10 children.  One son seems to have pushed his mother to her limits.  A letter from Mary Kip dated 1678 made reference to her friends who visited the Kip’s Farm house to counsel her “as to the best and most proper way to manage it with Johannesie Kip, the youngest child.”

Only one of the Kip children would produce an heir.  Samuel, who married Margaret Ryckman, passed the Kip’s House to his eldest son, Jacobus, who was baptized on April 18, 1706.   Jacobus died on October 1, 1773, not living to see the most colorful period in the history of the family home.

By the time that revolutionaries were threatening to overthrow the British government, the house was owned by Samuel Kip and had hosted many famous guests.  Frederick Kip documented “General Washington, Lord Howe, Sir Henry Clinton, Kniphausen, Percy and the Baroness de Riedesel, whose husband was in the British army, and other celebrities were sheltered under its roof.”

Not only was General George Washington entertained in the house, he used it briefly as his headquarters during the Revolution.  The house and its grounds were the scene of what was perhaps Washington’s most humiliating episode of the war.

Historian William L. Stone in his 1908 History of New York reported that following the Battle of Long Island in September 1776, Sir Henry Clinton led his troops across the East River to the Kip’s Bay Farm.  The American soldiers fled in terror even before the British landed.

“Indeed, the evacuation resembled rather a flight than a retreat—all the heavy artillery, military stores, baggage, and provisions falling into the hands of the enemy.”  Stone called the conduct of the militia “scandalous beyond endurance.”

Washington reportedly “drew his sword and threatened to run them through, and cocked and snapped his pistols.  But all his exertions were to no purpose.”  William Stone described the exasperated Commander in Chief “standing there a monument of disgust, bareheaded, with tears running down his great red nose, resisting the faithful aids who were trying to lead him out of danger.”


The Kip House was the scene of another important episode during the Revolution.  Colonel Williams of the 80th regiment was headquartered in the house in 1780.  On the night of September 19 Williams gave a dinner for Sir Henry Clinton and his staff.  Among them was Major John Andre.  Historian John Lossing Benson wrote in 1860 “It was his last dinner in New York.”  The following day Andre left the city to meet General Benedict Arnold.

According to John J. Post “This was the last time Andre met in life any of his brothers-in-arms.  At that dinner, though Andre’s object was unknown to all save himself, Sir William Howe gave the toast: ‘The health of Major John Andre, who leaves us to-morrow to return Sir John Andre.’”

Washington returned at least once and received an impressive gift, at least for the time.  Sometime shortly after Washington's inauguration, Dr. Francis recorded "On the old road towards Kingsbridge, on the eastern side of the island, was the well-known Kip's Farm, pre-eminently distinguished for its grateful fruits--the plum, the peach, the pear, and the apple--and for its choice culture of the rosaceae.  Here the elite often repaired, and here our Washington, now invested with Presidential honors, made an excursion, and was presented with the rosa gallica, an exotic first introduced into this country in this garden--fit emblem of that memorable union of France and the American colonies in the cause of Republican freedom."


As New York City inched closer to the Kip estate, the family remained in the house.  In October 1843 The Christian Intelligencer deemed that “the oldest house on Manhattan Island is the Kip mansion house, at Kip’s Bay, on Thirty-fifth street, between First and Second Avenues…The house is now occupied and owned by one of the Kip family.”

The article was almost accurate.  In fact 35th Street was only on paper this far east at the time.  And it ran directly through the Kip's House, at approximately No. 308 and 310 East 35th Street.  So when the city planned its extension in 1851, there was a problem. And with little fanfare and apparently no protest, the problem was solved by demolishing the 200-year old structure.

A Kip ancestor, Mandeville Mower, remembered the carved Kip coat of arms over the main entrance in a letter to The New York Times on March 10, 1898.  "Sad to say, this stone was probably destroyed when the house, said to be the oldest in the city at the time, was demolished."

On April 4, 1920, seven decades after the fact, the New York Herald flatly denounced the destruction.   "In 1851 Jacob Kip's house, in what was called Kipsborough, was torn down by some vandal who didn't care that he was destroying what was then the oldest house on Manhattan Island."  That same month The New York Times noted "It was the last of the old 'Bouweries' to remain...Today Thirty-fifth Street runs over the actual spot where the mansion stood."

In 1902 Charles Hemstreet had summed it up very well in his When Old New York Was Young.  "There are no longer green shores, with the house of Kip upon the hill.  Simply a dingy edge of the city, lined with ships and shipping, and over all a constant and bewildering roar."