The Lost Federal Relic at No. 85 Mott Street


As early as 1776, Mott Street appeared on maps meandering northward from Worth Street.  Named for the prominent Mott family, comfortable brick-fronted homes began appearing along it shortly afterward.  One of these, No. 85 Mott Street, sat on the southwest corner of Canal Street.

The commodious house represented the newer Federal architecture while holding on to some of the traditional Georgian elements.  Two and a half stories tall, its openings featured splayed stone lintels with prominent keystones.  Tidy dormers poked through the peaked roof.  Between the paired chimneys of the Canal Street side, a handsome arched window was flanked by two quarter-round openings.  The corner location meant that the interiors of the upscale home were flooded with extra sunlight.

But the quiet tone of the neighborhood did not last long.  By the 1820s the private residences were being converted to taverns, shops and boarding houses.  By the time that the Bull family purchased No. 85 and its two neighboring houses in 1836 it was already home to at least three families.  In 1837 city directories listed Charles Smith, a seafarer, living here along with Rosanna Gannon, “widow of Denis,” and dressmaker Eliza Marks.

Five years later John H. Burns had moved in.  A blacksmith and “gas engineer,” his skills would have been in high demand as the technology of street lamps illuminated by gas spread from England to New York.  Burns, whose business was located at No. 38 S. William Street, would remain in the house at least until 1847.

Along with John Burns, A. D. Cohen, a printer’s apprentice, was living here in 1842.  High-quality early Victorian books regularly included inside cover pages decorated with faux marble or swirling colored patterns.  Cohen received recognition that year for “a good specimen of graining.”

The blue-collar professions of the residents were evident in the tenant list in 1845.  Among those living here were Patrick Farmer, a carpenter who, like Burns, would stay until 1847; grocer James Reagen whose store was at No. 133 Walker Street; and Eliza A. Scudder.  She owned a “thread and needles” shop at No. 333 Grand Street.

Unlike wealthy New Yorkers who left the stifling city for summer resorts and estates; the boarders in No. 85 Mott Street suffered through the heat.  The mid-Victorian clothing, both male and female, only added to the discomfort.   James O’Brien lived here in 1863.  He nearly made it home on the scorching afternoon of August 22 before succumbing to the heat.  Two days later The New York Times reported “James O’Brien, aged 50 years, fell dead at the corner of Canal and Mott streets, on Saturday afternoon.”

By the early 1870s the ground floor of the house was converted for commercial purposes.  A cast iron store front wrapped around along the Canal Street side.  It was divided into two spaces; a shop on Mott Street and a tavern around the corner at No. 184 Canal Street.

The “lager beer saloon,” as described by The New York Times, was run by Moses Sands, known familiarly as “Mose” to his patrons.   In September 1874 John Griffin broke into the saloon “for felonious purposes.”  He was caught and, held on $2,000 bail, had to answer to Justice Flammer on the morning of September 20.  It did not go well for Griffin.

Like many saloon keepers at the time, Moses Sands was somewhat shady himself.  On August 4, 1879 The Times mentioned “Moses Sands…keeps a liquor store, and was arrested some time ago, charged with having stolen property in his possession.”

In the meantime the Mott Street shop was doing a more respectable business.  Abram and Herman Spektorsky operated A. Spektorsky & Son here.  Feather dealers, they manufactured a variety of items like their popular feather duster, a household necessity.

As the turn of the century neared, the shop became home to Isaac Werkman’s coat factory.  He employed eight workers, seven males and 1 female; several of which were minors.  A State inspection in 1894 noted that Werkman gave his under-age workers Saturdays off; but that they worked 11 hours every Sunday and 66 hours during the week.

By now the area was part of what newspapers termed the “Italian district.”   The upper floors of No. 85 filled with Italian immigrants.  In 1893 one newcomer to America used the address to get his citizenship papers on October 28—but it turned out he was a fraud.

Michael Marrone “could not be found at that address,” reported the Evening World on March 27, 1894.  The newspaper was doing an investigation into a rash of “bogus papers” during the flood of immigrants.  Its reporter checked in with Isaac Werkman, who said he “has been in business on the first floor for years” and “he had never heard of a man by that name, although he mentioned several Italians who had names somewhat similar.”  The newspaper added, “In the corner saloon, Marrone never was heard of.”

Among those who actually did live in the house in 1899 were Dominic Visconti and Peter Addeo, both laborers, and Addeo’s two sons John, 17-years old, and 23-year old Salvator.  Both sons were barbers.  Another resident Joe Bonavanduro was married in the house on November 26, 1899 to Patsy Andego.

What should have been a joyous event turned horribly violent and tragic.

The Sun reported “There was a large gathering in the house to see the wedding, and the festivities went along merrily till Visconti found fault with the music.”  The music—played on two mandolins and a guitar--was provided by the Addeo brothers and another barber, Salvator Scalponi, who lived at No. 40 Mulberry Street.  Peter Addeo resented Visconti’s imputation that his sons were not accomplished players “and hot words passed.”

Women in the room jumped between the two fuming Italians and temporarily calmed the situation.  The wedding went on and the couple was married.  While the guests pressed around them to give their well wishes, the simmering tempers of the two men flared again “because Addeo and Visconti each wanted to be the first in congratulating the bride.”

The newspaper reported “They shoved each other and at that the Addeo boys put up their instruments in readiness for trouble, as did Scalponi, whom honor bound to see his friends on top in the scrap that was coming.”

The “scrap” would prove deadly.  As Addeo and Visconti came to blows, the boys joined in, beating Visconti first with sticks, then attacking with knives.

On the street Detectives Finley, Touwsma and Milhouse were on the way to the Hudson Street Hospital with the victim of a different stabbing and a prisoner when they heard the screams and shouts from upstairs.  They rushed into the room to find Dominic Visconti dying, stabbed five times in the chest.

He lived long enough to tell the police “that all of the three Addeos and Scalponi had used knives on him.”

At some point the dormers were removed and the roof raised to a full floor.  In the early decades of the 20th century the former saloon became a tailor shop and the Mott Street shop became home to G.Slavin’s Canal Clothing Exchange.

By 1937 the store was operated by Morris Slavin who resolutely butted heads with other clothiers in the neighborhood that year.  For over a century clothing retailers used the “puller-in” to garner business.  The employee would stand on the sidewalk and persuade passersby to enter the store.

But modern shopkeepers now denounced the practice as tawdry and “a detriment to trade.”  When representatives from 28 other clothiers in the neighborhood pleaded with Slavin to do away with his puller-in, he refused.  So the East Side Merchants Association pressured him by hiring 21-year old Edward Kritzer to picket the Canal Clothing Exchange.
The Times reported that Kritzer carried “a sign appealing to passersby not to patronize Slavin’s store because Slavin was ‘unfair to the retail clothing business in the vicinity.’”  Unwilling to bend, Slavin filed a formal complain against Kritzer for disorderly conduct and interfering with his business.

Perhaps because of the ugly publicity (and the picket sign) Morris Slavin declared bankruptcy a few months later, in 1938.

The Mott and Canal Street neighborhood, once an respectable residential enclave, then an Italian tenement district, was now becoming New York City’s Chinatown.  On March 11, 1939 The New York Times announced that George Bull and Albert W. Maclay had sold No. 85 and the two old houses next door after ownership of more than a century.

“Acquired by the sellers in 1836…the buildings, said to have been erected about 150 years ago, will be razed starting on Monday and a two-story store and office building erected on the site,” reported the article.

That small building survived until 1950 when it was replaced by No. 83-85 Mott Street, a pagoda-imitating structure which served as headquarters of the On Leong Tong, once one of Chinatown’s most notorious and violent gangs.  It now houses the Chinese Merchants Association. 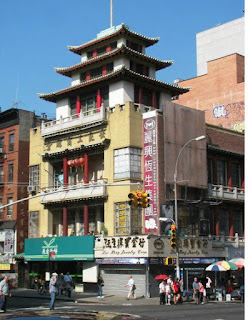