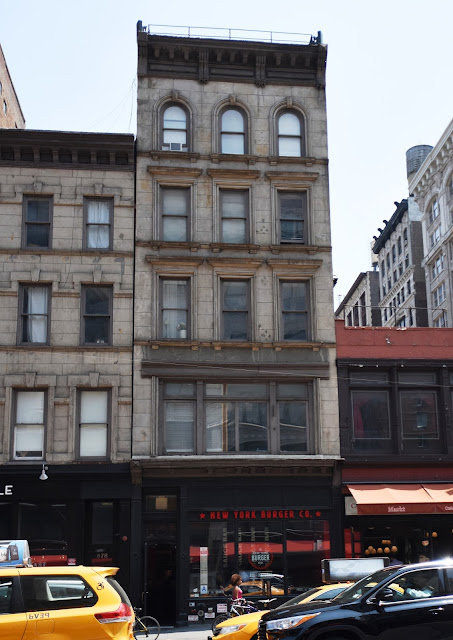 In the summer of 1870 the stretch of Sixth Avenue between 14th and 23rd Street was still mostly lined with modest brick homes and small shops.  By the turn of the century it would rival Broadway as New York’s main shopping thoroughfare, later earning the name “The Ladies’ Mile.”

That year, on June 17, 1870, John G. Prague filed plans for a “five-story and basement Ohio-stone front store and tenement.”  The architect, who would later design blocks of upscale residences on the Upper West Side, had been commissioned by Mrs. Moritz Waitzfelder.  The existing brick house on the property was demolished and construction began.

The Civil War had ended five years earlier and no doubt builder Samuel Loudon once again had a full work crew to erect the building.  The Italianate-style structure, at the time numbered No. 342, was completed in April 1871.   Above the cast iron storefront, Prague embellished the second through fourth floor openings with handsomely carved architrave surrounds, their sills sitting on delicate brackets.  At the fifth floor, the windows were arched and sat on projecting sills.  An attractive bracketed cornice crowned it all.

On March 7, 1891 an advertisement appeared in The New York Herald offering, “To Let—The store and basement of new building 342 Sixth avenue; also floors of same.”  The upper floors had one spacious apartment each.  The size of the floor-through apartments afforded the second floor tenant the extra space to rent a room.  Seven months after the building opened, on October 11, another ad appeared in The New York Herald.  “A nicely furnished front hall room, with closet to let…Ring second bell.”

On March 23 1872 the Real Estate Record & Guide reported that the store had been leased for a period of three years at $2,500.  It became the showrooms of the Eagle Slate Company.  For a year it would advertise slate mantels “of new designs and colors” and “tile and other slate work.”

Eagle Slate Company did not stay through the term of its lease.  By the end of 1873 a “first class lager beer saloon” had taken over the space.  It was the first hint of the fate of Mrs. Waitzfelder’s respectable building to come.  But that saloon had a short life at No. 342 Sixth Avenue, as well.  On Thursday, August 13, 1874 a foreclosure auction was held on the premises by auctioneers Bowe & Hillier.  The advertisement listed “black walnut Bar and back Bar, Mirror, black walnut Tables, black walnut Chairs, and all other Fixtures.”

In April 1875 Andrew Mush signed a four-year lease at a reduced rent of $2,000.  Mush lived just around the corner at No. 37 West 21st Street and listed his business here simply as “beer.”  The first unwanted publicity came to No. 342 Sixth Avenue on May 20, 1876.  Saloons were forced by law to close at midnight on Saturdays, since no alcohol could be sold on Sundays.  Police across the city were ordered to raid saloons that night.  The following Monday morning the New York Herald reported “the result was the wholesale arrest of liquor store proprietors and their barkeepers, commencing at midnight of Saturday and continuing through yesterday." Among those arrested was Andrew Mush’s bartender, Anthony Fay.

In 1888 Emma L. Parks owned No. 342 and beginning on August 1 that year she leased the saloon to John Boland.  His five-year lease totaled $5,750.  Boland had been in the saloon business since 1879 and was described by The New York Times later as “a well-known liquor dealer.”  He was a partner with his brother-in-law in another saloon at the corner of Third Avenue and 67th Street; and also owned Manhattan real estate.

But John Boland, who “was supposed to be worth $50,000” according to The Times, found himself in serious financial trouble by the spring of 1892.   On March 5 he was informed that the saloon on Third Avenue had been sold off by the Sheriff.  On March 9 The New York Times reported that he “was willing to turn over the Sixth Avenue store to the plaintiffs to pay their claims.”  The article placed the value of the saloon at $15,000—in the neighborhood of $400,000 in 2016.  Within the week Boland had conveyed the lease to John N. Crusius of Hoboken.

When the Raines Law was enacted on March 23, 1896, the destiny of No. 342 was sealed.  The law was intended to curb the consumption of alcohol by imposing regulations.  But an exemption to the Sunday liquor laws was that hotels could still serve alcohol to guests, if it were served either with a meal or in the guests’ rooms.   The result was that saloons, like the one at No. 342 Sixth Avenue, took over the upper floors as a “Raines Law hotel” to circumvent the excise laws.

John Bogner ran the “hotel” at the turn of the century.   On May 21, 1900 The New York Times reported that 35-year old Newark resident John A. Clapp had attempted suicide in Bogner’s “Raines law hotel.”  According to the report, “Clapp went into the wash room of the hotel, and soon afterward a pistol shot was heard.  He was found lying on the floor with a wound in his left breast and a revolver beside him.”  Clapp was taken to New York Hospital; but his injury was thought to be fatal.

At the same time “Madame Atlas” ran her “employment agency” in the building.  Exactly what types of employment she was offering was brought into question by law makers and reformers in November 1901 when the Raines Law was reconsidered.  One, James Shevlin, observed “Many of the men who are keeping these hotels at the start would as soon have cut of their right arms as to be responsible for the evils they bring about, but the law compels them practically to be keepers of disorderly houses or give up their businesses…The Raines law hotel is an abomination.”  Senator Thomas F. Donnelly complained that the law had resulted in hotel rooms being used for “immoral purposes.”

Rather shockingly, the notorious saloon and hotel at No. 342 was by now surrounded by mammoth department stores and emporiums.  Sixth Avenue was thronged with well-dressed, respectable female shoppers who no doubt either avoided that side of the street, or were blissfully naive of the activities inside.

At the time of the lawmakers’ investigations the hotel and saloon were being operated by Arthur P. Fegert, who named it The Studio Hotel.  The not-so-upstanding citizen would later be arrested on unrelated fraud charges.   The term “disorderly house” used by James Shevlin was the polite term for a brothel.  It was directly applied to The Studio Hotel by detectives following a raid here on September 12, 1903.  Hotel clerk Louis Kardos was arrested for “keeping a disorderly house.”

Another employee was arrested five months later following a sting by police.  On February 29, 1904 The Times reported they “managed late yesterday afternoon to gain admittance to a saloon and hotel known as ‘The Studio’ at 342 Sixth Avenue, where Patrolmen Wickman and Lynch bought two glasses of beer, with which they say neither sandwich nor lunch was served.”  The waiter, William Riecken was arrested and charged with violating the excise law.

The hotel and saloon continued to pass from one owner-operator to another.  In 1910 it was run by William Heyer and the following year by Henry Beckmann.  In December 1913 it was again pulled into scandalous press coverage following 15-year old Margaret Lima’s shooting of 17-year old Meyer Simons in front of the New Star Theatre at 107th Street and Lexington Avenue.  A stray bullet also hit 12-year old Joseph Jaeger.

The enraged teen was seeking retribution for what today would be called date rape.  She told detectives that Simons had “flirted with her [and] that subsequently he took her to dinner and gave her drugged wine.”  Simons then took Margaret to The Studio Hotel where she awoke the following morning “to find that she had been deserted.”

Realizing that Meyer Simons was not coming back, she pawned a diamond ring to buy food and rent a furnished room.  She told investigators she intended to find a job “because she was afraid to return home without the ring.”  For about a week she not only looked for a job, but for her attacker; finally finding him outside the movie theater where she shot him.

The girl was accused of felonious assault with intent to kill.  When asked “Why did you shoot this young man?” she flatly responded “Because I’m a Sicilian girl and they always revenge themselves for their wrongs.”

Child welfare officials saw a different reason for the shooting.  The New York Times reported that “The authorities of the Children’s Society are of the belief that the girl is mentally unbalanced from seeing too many cheap moving-picture shows.”

Catherine Russell ran the hotel and saloon in 1916; but the end of the line for the notorious address was nearing.  Following the enactment of Prohibition the upper floors had been converted to factory space by 1920.  The second floor loft received a modern make-over with Chicago-style windows that flooded the workspace with daylight.  When Sixth Avenue was extended in 1925, the building got a new address, now numbered No. 678.

The upper floors  had returned to residential space when it was sold in 1936, described as a “five story apartment house.”  In 2006 the building was internally joined with No. 680 and in 2013 a conversion was completed resulting in seven apartments. 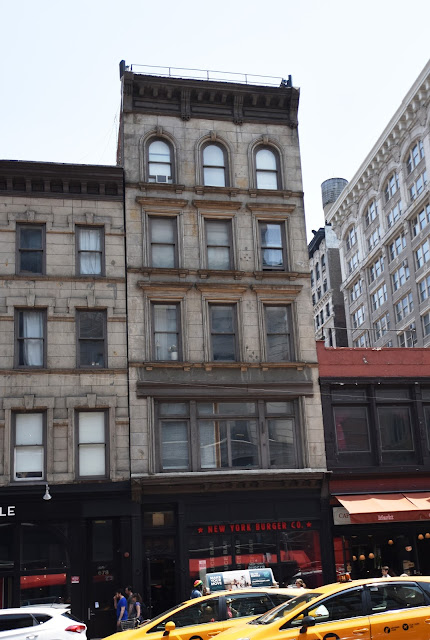 John G. Prague’s handsome Victorian building survives among a jumble of architecturally-interesting buildings on the block.   Its dignified stone façade gives no hint at the colorful and sometimes scandalous history that played out inside.