James Gordon Bennett, Sr. founded The New York Herald in 1835.  Under his masterful leadership it became the dominant newspaper in the city for most of the century.  Although his son, James Gordon Bennett, Jr. was raised in Paris, it was expected that he would return to New York to take over the business.  And he did, in 1866 shortly before his father’s death.

But the younger Bennett had enjoyed a carefree, playboy lifestyle in France that would raise eyebrows in the buttoned-up parlors of Victorian Manhattan.  When he attended a New Year’s Day party hosted by his fiancee’s family in 1877 he put an end to his engagement and his life in New York by urinating in the fireplace.

Bennett went into a self-imposed exile in Paris, virtually sneaking back into New York occasionally to make surprise visits to the Herald offices.  His physical absence did not alter the fact that the flamboyant and eccentric publisher was fully in charge.

As the 19th century entered its last decade, Bennett decided on a move from the Herald’s white marble building on Newspaper Row in lower Manhattan.  Furiously battling Joseph Pulitzer and William Randolph Hearst for newspaper supremacy at the time, he made a gutsy decision to abandon the publishing district altogether.  Recognizing the northward expansion of commerce, he leased the triangular plot of ground at the intersection of Broadway and 6th Avenue between 35th and 36th Streets from William De Forest Manice.

Bennett signed two leases—one for twenty years and the second for ten.  The yearly rental for the first ten years was $55,000, $65,000 for the second ten years, and $75,000 for the third.  When his manager questioned Bennett on building with only a 30-year lease, the publisher replied “Thirty years from now the Herald will be in Harlem, and I’ll be in hell!”

For the design of his new headquarters James Gordon Bennett went to Stanford White of McKim, Mead & White.   How much influence Bennett had on the design is a matter of contention; however by 1893 preliminary sketches were released to the public.  White based his design on the 1476 Venetian Renaissance Palazzo del Consiglio in Verona.    Completed in 1895, its one criticism was that it was “too perfect” a copy.

If Bennett had no influence on the style of the building, he most definitely gave direction on its decoration.  By now the publisher had become obsessed with hoot owls.  He had run editorials in the New York and Paris editions of the Herald fighting for the preservation of the species.  The owl became the symbol of the newspaper.   Along the roofline he had twenty-six four-foot bronze owls installed.  The birds at the corners, with spread wings, were given green glass eyes that eerily glowed on and off with the toll of the Herald’s clock.  The owls were intended to symbolize the wisdom of the newspaper’s printed words.

The owl motif was carried further in the magnificent bronze grouping that surmounted the 35th Street façade.   Minerva, goddess of wisdom whose traditional attendant was the owl, stood over a large bell.  Two mechanized typesetters wearing leather printers’ aprons swung mallets, tolling the hour.  Atop the bell perched yet another bronze owl.  The sculptural group was commissioned in Paris at a cost of $200,000 and executed by French artist Antonin Jean Paul Charles.

Bennett paid for the sculpture and the owls from his own pocket to ensure his personal ownership.

Bennett’s owl infatuation would culminate a few years later when he called upon Stanford White again to design a 125-foot tall stone owl for his Washington Heights estate.  The towering sculpture would stand on a 75-foot pedestal and was designed to hold his future sarcophagus.  Bennett envisioned tourists climbing a circular staircase surrounding Bennett’s suspended coffin; finally reaching a platform at the top where magnificent views of the city could be enjoyed.

Although White completed the designs, his murder on June 25, 1906 halted the anomalous tomb’s construction.

In the meantime, White’s magnificent Italian palazzo was a show stopper.  A deep  and graceful arcade along the sides offered passersby the opportunity to watch the giant presses in motion inside.   On March 21, 1895, at noon, the bronze figures above the roof first tolled the hour.  Editor & Publisher wrote that “thousands of persons cluttered up the neighborhood and gazed at the two figures.”

Architectural critics approved.  John Vredenburgh Van Pelt, in Progressive Architecture, said “Stanford White’s work in terra cotta is the best of the period.”  James Gordon Bennett was not so sure.  Shortly after the building’s completion he traveled to New York to inspect the finished goods.   Editor & Publisher later reported that “He stood on a street a block below and said: ‘It looks a little ‘squattier’ than I thought it would.  It could have had one more story.’”

Squat or not, the New York Herald building was now the costliest newspaper office building in the world.   The New York Times suggested that Stanford White must have been thrilled with the expensive and highly-visible site.  “...The architect may very well view it with delight, since it gives him a chance to convert a commercial building into an ‘exhibit’ of a great industry, and even to give it a monumental character.”

The newspaper praised White’s disciplined following of the 15th century style.  “There is no straining after originality in the design, the detail being of the early Italian Renaissance and the architecture recalling, perhaps too specifically, some of the monuments of the fifteenth century, of the period of the Certoso at Pavia.  The great and almost unprecedented profusion of the decorative detail is a point that will arrest attention.”

The Times ended its assessment saying “Upon the whole, Mr. Bennett and his architects are to be congratulated upon a graceful and effective piece of architecture which constitutes an ornament to the city.”

But the ornament to the city would not last long.   The New York Herald building was iconic.  It defined what was now called Herald Square and it attracted scores of tourists and New Yorkers alike every day who would press against the expansive street level windows to watch the printers at work.  Tens of thousands of postcards and stereopticon slides of the extraordinary architectural gem that held a printing plant were published.

Yet on May 12, 1921 the New-York Tribune ran a head line that read “Old Herald Building Soon to Come Down.”    Bennett’s 30-year lease was coming to a close and, as he anticipated, the newspaper was moving further north.    By the time the Tribune ran the article, preparations were already under way.

“The heroic bronze smiths, known as Guff and Stuff, who had been striking out the hours night and day on the big bell on top of the southern façade of the building for the last twenty-eight years, and the goggling owls that had watched from their lofty perch on top of the building during those years were removed last month, for they were the property of the late Mr. Bennett,” said the newspaper.

The lease had been taken over by Nicholas C. Parlos, head of the Partola Manufacturing Company which made “candied medicine.”    The Tribune reported that he “plans to replace the present low structure…with one of twenty stories to be used principally as headquarters for his company.”

A month later the Herald Building got a reprieve of a sort.  The New York Times reported on June 18 that the Rogers Peet Company—a mens’ clothier—had leased the southern half of “the famous old structure.”   Rogers Peet would move from its present location, diagonally across 6th Avenue, into 33,000 square feet.   The old press rooms and offices were renovated at a cost of $400,000, including the installation of a mezzanine, to selling space.

In February the following year, Rogers Peet moved in.  An advertisement in The New-York Tribune said “To-day, though the Herald Building has been converted into fine selling quarters, flooded with daylight, the general design of the building, which is a replica of the charming Palazzo del Consiglio or City Hall of Verona, remains unchanged—a matter for congratulation to the architect who has so skillfully retained a grace of art while remodeling it to its new prosaic purpose.”

The ad lamented the loss of the blinking owls on the roof, but added “Now it’s birds of fashion who will alight to see up-to-the-minute styles designed for men of the hour!”

In the meantime, Partos demolished the northern half of the building and, as promised, erected a modern high-rise office building.

The stay of execution for the front half of the Herald Building lasted until 1940.  On February 24 The Times reported on the impending demolition.   Owner 1,350 Broadway Realty Corporation announced that a new $250,000 four-story structure designed by architect H. Craig Severance would replace White’s showplace.   The newspaper said the “improvement” would be a “granite and limestone building with bronze store fronts featuring large display windows.”

Later that year a 40-foot granite monument to James Gordon Bennet, Jr. designed by Aymar Embury II, consulting architect of the Parks Department, was installed in Herald Square.  It incorporated the mechanized clock grouping of Minerva and the two bell-tollers which had been long crated away in storage.

Herald Square now features several of the bronze rooftop owls perched on gate posts.  And if you look closely as night falls, you will see that the owls with spread wings atop the monument still flash their eerie green eyes. 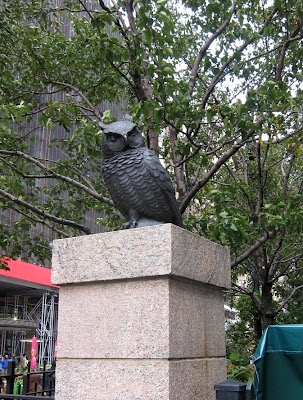 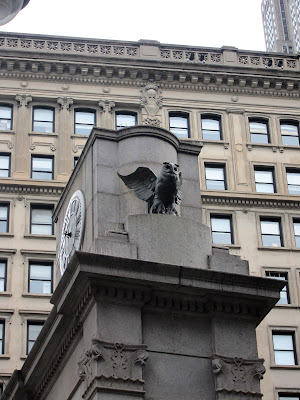 The monument and the owls are the last vestiges of one of New York City’s masterpieces of architecture, wiped away in favor of what Nicholas Parlos called in 1921 “a structure of great income producing capacity.”

many thanks to reader MjH for suggesting this post
non-credited photographs taken by the author
Posted by Tom Miller at 3:01 AM