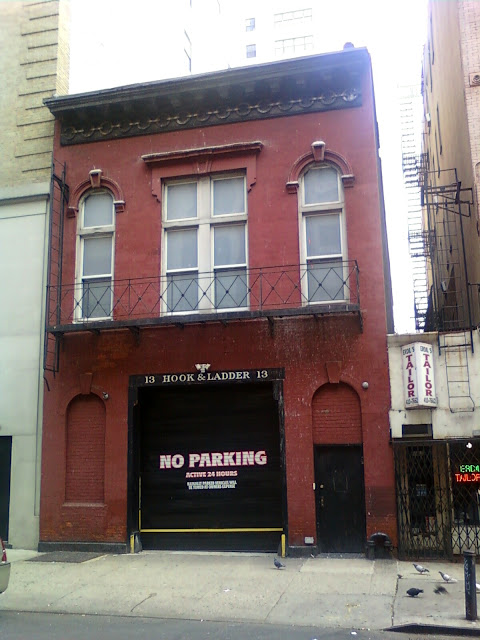 In April 1865 the Battle of Appomattox Court House resulted in the surrender of General Robert E. Lee and the beginning of the end of what New Yorkers called the War of Rebellion—the American Civil War.  Before long New York City’s young men would be marching home and resuming their lives.

Some of them were “laddies,” the volunteer fire fighters who protected the growing city’s buildings.  The volunteer companies were disorganized and haphazardly scattered.  When fire would erupt, the nearest fire houses would vie with one another to reach the blaze first, or to become the most skilled at firefighting.    Although they provided a desperately needed service, the laddies earned a well-deserved reputation as rowdy, boisterous gangs whose fire houses essentially doubled as social clubs.

But that all changed in 1865.  Partly prompted by the widely-publicized conflagration that destroyed Barnum’s Museum that year, reformers pressured the State Assembly to organize a professional fire department.  The Act of 1865 joined the cities of New York and Brooklyn with a single, paid “Metropolitan District” fire department.

In the Yorkville neighborhood the Cornelius Anderson #10 Ladder Company was reorganized on October 11, 1865 to become the Suburban Hook & Ladder Company No. 13.  The small company received a handsome red brick fire house at No. 159 East 87th Street on New Year’s Day 1868.  Trimmed in deeply-carved brownstone, the two story structure was a near match to several other firehouses being rapidly erected throughout the new metropolitan district.  Heavy foliate scrolled keystones graced the arched lintels of the street level and an unusual and attractive chain motif ran below the cornice.

The men of Hook and Ladder Company No. 13 served valiantly throughout the decades, not always serving only the Yorkville neighborhood.   Just past noon on August 22, 1891 an explosion occurred in the five-story building that stretched from No. 68 to 72 Park Place.  Children playing in front of the drugstore at No. 72 were immediately killed and a fire broke out inside.  The building was filled with workers—many of them young women—employed in bookbinding and printing businesses.  A restaurant was crowded with lunchtime patrons.

The fire spread rapidly and within minutes the front walls of the building collapsed.  Before anyone could escape the entire building caved in upon the inferno.   A news bulletin was wired at 2:30 p.m. calling the collapse and fire possibly “one of the worst disasters that ever happened in this city.”

Three days later as the search for bodies continued, the firemen of Hook and Ladder Company No. 13 arrived to help.  The Evening World reported that the firemen “went to work and the squad of longshoremen returned with a fresh gang of Italians.  The first thing to do was to tackle some of the heavy presses which still lie on the top of the great mass of debris in the centre of the ruins and which interfere with the search for bodies."

As the Yorkville fire fighters began digging through the ruins, 42 bodies had already recovered and 111 were still missing.

Closer to home the Ladder Company dealt with fires in tenements and old houses that often burned quickly and had little means of escape.   One such blaze occurred on February 20, 1902 in the house at No. 60 East 87th Street.  The fire started in the lower hallway of the three-story rooming house and spread rapidly.  The New-York Tribune, which noted that the “fire abounded in thrilling incidents,” reported that “nearly all the doors of the house were open, and this fact converted the hallways into a great flue, in which the flames swept upward.”

The old house was filled with trapped residents.  When the fire fighters arrived, Mrs. Louisa Liebershultz, who lived on the second story, was standing at a window.   The 50-year old woman was “shrieking and wildly waving her arms.”  The men of Hook and Ladder Company No. 13 shouted for the woman to stay where she was as they began raising their 35-foot ladder.  Just before the ladder reached the second floor, the flames neared Liebershultz and she panicked.

“Uttering a piercing scream, she threw herself from the window,” said The Tribune.  The fall was fatal.

In the meantime, the fire crew frantically worked to rescue the other residents.   Mrs. Mary McLean lived on the third floor and she, too, “added her screams to the general din of shouts and cries.”  She obeyed the firefighters and remained in the open window until the ladder was raised.  Fireman Patrick O’Keefe carried the woman to the street to the accompaniment of cheers from the crowd.

When the blaze was finally extinguished, the men of Hook and Ladder No. 13 found the badly-burned body of Mrs. Martha Merten sitting upright in a chair by her closed widow.  On the floor next to her was the body of her little pet dog.  Had Mrs. Merten opened the window to call for help, or closed her door to delay the progress of the flames, she might have survived.  Firefighters surmised that the 40-year old died of fright or heart attack before the flames reached the room.

Similar tragedies occurred repeatedly throughout the Company’s history.  Around noon on July 8, 1908 Mrs. Mary Smith was cooking in her tenement apartment at No. 319 East 80th Street.  Her gas stove exploded, setting fire to her dress.  The 57-year old women tried in vain to smother the flames then ran screaming into the hallway where she dropped to the floor.  Her blazing Edwardian clothing set fire to the staircase and within moments the shoddily-built hallways were filled with smoke and flame.

Inside the tenement were at least 30 children who were rushed to the halls and fire escapes by their parents.  “The men of Hook and Ladder Company 13 were the first to arrive, and they swarmed up the fire escapes and led or carried may women and children to the street and to the roofs of adjoining houses,” reported the New-York Tribune.

Firefighter James Perry was a hero that day.   Making his way to the roof of the house at No. 321, he was lowered to the fourth floor by a rope tied around his waist.  “He swung, pendulum-like, until he could reach the window ledge, ad found Sadie McNamara, fourteen years old, unconscious near the window.  He held the girl in his arms and his companions pulled the two to the roof,” said the Tribune.  Firemen Coyle and O’Brien got into the room where young Sadie was found and rescued her mother, Elizabeth McNamara, who lay unconscious on the floor.

When the flames were under control, the firemen rushed into the building and found the body of Mary Smith in the hallway.

By the 1920s attempts were made to slightly modernize the Victorian firehouse.  The brownstone cornice and lintels of the first floor were shaved away and the arched truck entrance was squared off.  Happily the upper floor and delightful upper cornice decoration survived.

After nearly a century in its little brick firehouse, the Hook and Ladder Company moved to new quarters on East 85th Street.  The building sat empty until November 1962 when the young artist Andy Warhol, rented the second floor from the city as his studio.  Warhol offered $150 a month for what would become his first real studio.

Today the little red firehouse looks much as it did when Andy Warhol created his art here.  The façade has bee slathered with barn-red paint and one of the arched openings bricked over.  But the intrepid little building still exudes a sense of history through the surviving architectural details of the upper floor.

non-historic photographs taken by the author
Posted by Tom Miller at 2:53 AM