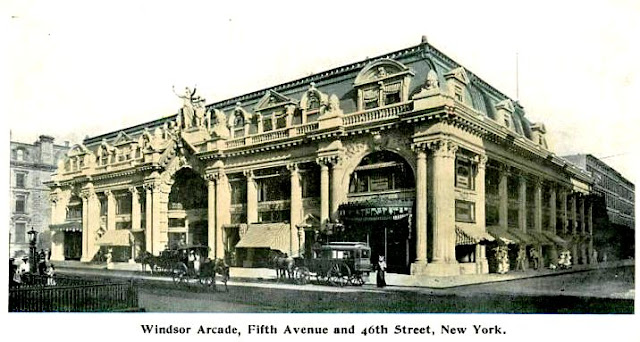 In 1873 fashionable Fifth Avenue above 34th Street saw the opening of the elegant Windsor Hotel—one of the first incursions of commerce in the residential neighborhood.   The luxurious seven-story hotel stretched along the entire block from 46th to 47th Street on the avenue lined with the imposing mansions of millionaires like Robert and Ogden Goelet, and Jay Gould.


Wealthy guests came and went at the Windsor Hotel until it all came to a tragic end on St. Patrick’s Day 1899.   While the parade passed below the hotel’s windows, a patron lit a cigar and carelessly tossed his match, igniting the curtains in a hallway.   Before long the entire structure was ablaze and guests threw themselves to the pavement from their windows.  By 4:20 the hotel had collapsed.  At least 60 persons were dead and 52 injured.


The day after The New York Times reflected “The fire that made an uncouth and terrible mass of rubbish of one of the city’s finest hotels was kindled by the tiny blaze that flickered on the head of a discarded match.”


The charred plot of land sat vacant for six months, a brutal scar—what The New York Times called a “dreary void”--on an otherwise elegant avenue.   On June 21, 1900 owner Eldridge T. Gerry announced plans to erect “an arcade building” on the site.   The arcade concept--an adaptation of the ancient bazaar—had been recently revived in the western world in St. Petersburg, Amsterdam and Paris.    Gerry envisioned a magnificent structure in keeping with its high-toned locality “designed especially for a gallery of fine arts, a store for china ware, and a photograph gallery,” reported The New York Times.
Gerry commissioned architect Charles I. Berg to design the innovative structure.   The “dreary void” would be transformed by the ebullient three-story Windsor Arcade.  Reminiscent of the monumental Beaux Arts structures introduced at the World’s Columbian Exposition in Chicago in 1893, the terra cotta and iron building featured a colossal portico surmounted by a sculptural group of “Winged Genius” by Bruno Louis Zimm.  Sixteen columns, 30 feet high, along Fifth Avenue were capped with ornate capitals.  Behind a handsome balustrade a high mansard roof gently curved away from the cornice.   Terra cotta ornamentation—olive branches, festoons and garlands of flowers—were manufactured by the Perth Amboy Terra Cotta Company.


The arched portico led to a formal garden, or conservatory, in the center of the courtyard.  Carriages could drive directly into the courtyard, preventing well-dressed shoppers from suffering foul weather.  The Times noted that “Carriages coming from either of the two streets can enter this courtyard and deposit people under shelter of the cloisteral arcade, very much as if a carriageway should be made into the Palais Royal, in Paris, to allow buyers reaching the famous shops of that little market directly.”

Only the portion of the arcade facing Fifth Avenue was three stories tall—the rear section rose only two stories.      The first floor housed 14 shops—two large shops at the corners with 12 smaller spaces between.  The third floor was designed as studio spaces with skylights and windows in the mansard.  Both the ground floor and third floor had 18 foot ceilings.  The second floor, with 12 foot ceilings, was leased as office space.


The Windsor Arcade was completed in 1901, relieving the nearby residents of the memory of the hotel fire.   As The Times pointed out, they were “no longer reminded of the distressing scenes enacted before their eyes when that frightful catastrophe occurred.”  Instead the newspaper praised the low profile and exuberant design of the new building.  “New York has been so peopled with lofty structures along its chief arteries of commerce that the comparative lowness of the Windsor Arcade makes an agreeable variety in the street architecture,” it said.


The newspaper’s critic applauded Berg’s decision not to imitate a mansion; but to create an unabashedly commercial, yet beautiful, structure.  “Moreover, the Windsor Arcade, while it expresses with perfect frankness what its purpose is, and does not attempt to disguise its commercial intentions under the appearance of some more ambitious form, has no little attraction as a piece of architecture.”  The Times concluded that the new building was “worthy of the distinguished spot it occupies on that thoroughfare which Manhattan considered the best.”


Gerry’s new building cost a staggering $2.5 million—“a good sized sum to put into such an undertaking,” said The Magazine of Business.  The main entrance was lighted at night by hundreds of electric lights.    The Magazine of Business felt that the handsome façade, the lights, and the innovative arcade concept would “pull” the casual passerby into the stores.


Among the first tenants was Suckow Milliners.  The high-end store offered creative hats in the latest fashions, decorated with pheasant feathers and ostrich plumes, to Fifth Avenue’s well-heeled shoppers.    Pach Brothers’ established its fine arts studio here.  The gallery was outfitted to resemble the drawing room of one of the surrounding mansions.  The reception area was hung with pastels, oil paintings and “photographic portraiture.”    Jay Gould, whose brownstone home was across 47th Street to the north, had his photograph taken here as did President Theodore Roosevelt.

The Fencers’ Club took space as its clubhouse and fencing arena here and on November 25, 1902 gave Fifth Avenue socialites more of an exhibition than they might have expected—or hoped for.  The Evening World reported the following day that “The three hundred elegantly gowned women, including members of the Vanderbilt, Astor and dozens of other families of New York society, who yesterday afternoon sat in the galleries surrounding the highly polished arena of the Fencers’ Club, in the Windsor Arcade, are wondering to-day whether they witnessed a real duel between two skillful swordsman.”


Within only a few seconds, Tathan saw an opening and inflicted a gash to Brownall’s forearm from which, according to The Evening World, “blood spurted.”  The duel was then brought to a wisely-abrupt end.  The newspaper noted that “judging from the many pale faces that looked down from the galleries, had it continued any longer many of the fair spectators would have fainted.”

The Windsor Arcade was a success; but Eldridge Gerry had not intended it to be a lasting endeavor.  He built it as a “tax-payer”—the term used in realty circles for a structure erected for the purpose of covering the expenses of the property until something “profitable” could be erected.  The New-York Tribune noted in 1909 that “It is considered by many building experts to be the most beautiful ‘tax-payer’ ever erected in this city, and it long ago proved, it is said, to have an earning power larger than most buildings of its kind.”


Profitable or not, on November 5, 1909 the carpet firm of W. & J. Sloane announced intentions of razing the northern half of the Arcade to build its new eight-story headquarters.  The Arcade managed to survive another year, but in May 1911 wreckers began tearing down northern half of the 10-year old structure.  Gerry brought Charles I. Berg back to alter the southern portion into offices.  But it was not to be.

Instead Robert Goelet leased the southern portion which abutted his Ritz-Carlton Hotel.  He announced that a ballroom addition to the hotel designed by Warren & Wetmore would replace the southern half of the building.   After only a decade, the Windsor Arcade, deemed by The New York Times at the time of its completion as “well-designed and handsome” was demolished.