A Terra Cotta Gem at No. 103 Washington Street 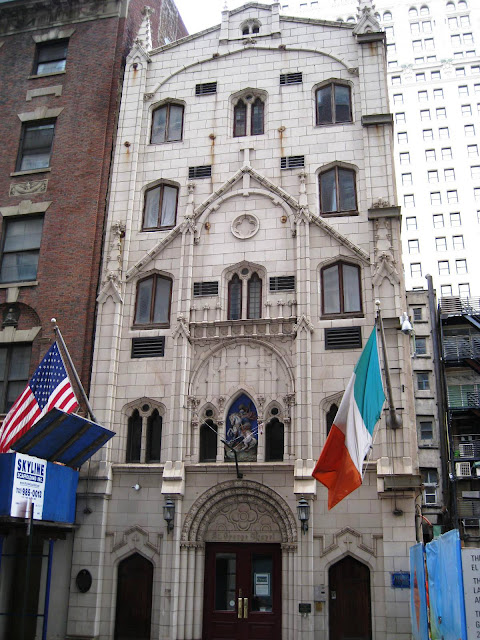 Quite different from the straight, wide thoroughfares of Midtown that intersect at crisp right angles are the narrow, twisting streets and alleys of the Financial District.  Here at the southern tip of the island the Dutch first settled and these venerable roadways follow those early designs.   The confusing tangle sometimes results in historic, architectural gems being hidden and overlooked.
Gems like No. 103 Washington Street.
Two centuries ago, around 1812, a three-story Federal style building was constructed here.   Washington Street, at the time, was blocks away from the bustling commercial center on the other side of Wall Street.   In the 1780s, landfill widened Manhattan and Greenwich and Washington Streets were created in 1797.  By 1812 houses and shops catering to the ships docked nearby lined the street.
The lot at No.103 Washington Street was purchased in 1799 by Ryneer Suydam who owned a store at 4 Stone Street.  Suydam built his three-and-a-half story building with a store about 1812, certainly no later than 1819 as reflected in tax assessments.
After Suydam’s death, the building was sold in 1835.  Since 1831 it had been a ship chandlery and remained so until 1843.   Charles Rowald, who had a grocery business on Front Street, purchased No. 103 Washington, leasing it to other merchants.  Rowald moved in for one year, between 1847 and 1848, when he ran an liquor store here.
The riverfront area was, at mid-century, a rowdy one and by 1852 the building was an “emigrant boarding house,” and before long a “German dance-house” was operating on the ground floor.  The girls who were employed as “dancers” were in fact prostitutes, and rough-edged ones as that.
On January 10, 1859 several of the women here were doing their laundry.  The task in pre-Civil War days involved scrubbing clothes in vats of scalding water.  An ingenious contrivance called an “indigo-bag” was used as a bluing agent.   One such bag caused problems at the dance-house.
Miss Vent noticed Miss Riddle using an indigo-bag that did not belong to her.  The New York Times reported “Her making so free with the indigo-bag gave offence [sic] to Miss Vent, who is employed as a dancer, while Miss Riddle only occupied the place of a servant.  Miss Vent, being in anger, seized a pot of coffee and threw it in Miss Riddle’s face.”
Servant or not, Miss Riddle did not take the action lightly.  “Miss Riddle replied by hurling a smoothing iron at the head of Miss Vent,” reported the newspaper.  Not to be outdone, Miss Vent proceeded to stab her opponent in the breast with a butcher knife.
John Hermann Schutte purchased the building in 1865.  Schutte operated boardinghouses catering to the sailors who frequented the riverfront.   He enlarged the building by adding two floors in the summer of 1869, creating two apartments on each of the upper three floors.
The census of 1870 showed resident families and couples living here—mostly German and Irish immigrants—as well as over 300 transient seamen who would come and go as their ships did.

In October 1897 two sailors who were staying in a room in the upper floors got into an argument.   John Boyson shot his roommate, 26-year old Gottfried Teitze in the stomach; then realizing what he had done, fatally shot himself.   In an odd aside, The Times remarked that “Tietze…is said to have been well educated.”
By the time of the tragic argument between the two sailors, the Washington Street neighborhood had become the destination for Syrian immigrants who began arriving in New York around 1880.  By the turn of the century the area was known as the Syrian Quarter.   In 1899 George Forzly was operating his dry goods and banking business George Forzly & Co., from No. 103.
That year about 700 angry Syrians mobbed the street after finding out he had disappeared with about $50,000 of their savings.   The Times explained that duping the new arrivals to America was easy for the unscrupulous.  “It was said in the Syrian colony yesterday that the secret of the confidence many bankers win among the poorer classes of Syrians…is that they display in their windows revenue and postage stamps and legal blanks.  The Syrians and Italians know that in their own countries such things are handled only by agents of the Government and believe that any bank authorized to sell them must represent the United States.”
Forzly declared bankruptcy and, between 1905 and 1908 H. & H. Homsy ran its shirtwaist and kimono manufacturing company here.  In 1909 the building was nearly lost when a fire broke out in the 4th floor apartment of Mrs. Allie Anderson who worked as a janitress.   The woman’s invalid sister, only 14 years old, was home alone and helpless.  As the flames worsened, a neighbor Abraham Boyfsal heard Mrs. Anderson’s screams and carried the girl out of the burning building.   While the girl was saved, the top three floors of the building were badly damaged.
The Syrian community was composed mainly of orthodox Catholics, called Melkites.  There was only one Muslim family in the neighborhood in 1904 and a few Jewish families.  While the Melkites recognized the primacy of the Pope, they adhered to the Greek Orthodox Byzantine Rite.  As early as the 1880s they petitioned the Archbishop of New York to provide a Syrian priest.  “We are about 2,000 persons living without a priest and very few of us understand English,” their letter said.
According to Alia Malek in his “A Country Called Amreeka: Arab Roots, American Stories,” the parish of St. George’s Syrian Catholic Church prayed from the basement of St. Peter’s Roman Catholic Church on Barclay until 1916.  That year they “moved into their own church…at 103 Washington Street.”  The parish was apparently renting the building, however, because in June of 1920, George E. Bardwil, who imported high-end linens and embroideries, purchased it for the church.
Late that summer, Brooklyn architect W. B. Wills was commissioned to renovate the commercial building into a proper church.  In 1921 his work was done.  He had gutted the first two floors to create a sanctuary and remodeled the exterior lower two floors with Gothic entrances and what was possibly a small rose window.  Above, the façade remained unchanged.
Then in 1929 the Syrian World reported that “elaborate improvements are planned for the Greek Melchite church at 103 Washington Street along designs prepared by Harvey Cassab, a Syrian architect of this city”  A year later the façade had been transformed into a majestic, terra cotta-clad Gothic Revival stunner.
The brilliant white terra cotta, meant to resemble marble, stood in stark contrast to the brown brick commercial buildings along the street.    Above the main door a terra cotta relief of St. George slaying the dragon adds a colorful splash to the white façade.    Cassab’s emphasis on the verticality of the five-story structure makes is soar skyward and gives it a monumental presence.

In 1939 the WPA’s “New York City Guide” described the Syrian Quarter.  “Although the fez has given way to the snap-brim, and the narghile has been abandoned for cigarettes, the coffee houses and the tobacco and confectionery shops of the Levantines still remain.”  But all that would change.
After World War II the Financial District had taken over the Washington Street neighborhood.  Many of the small buildings were demolished for skyscrapers and the Syrian neighborhood dissolved.  In 1957 the New York Archdiocese saw no reason to have a Syrian priest at the church any longer and assigned a Roman Rite priest.  In 1977 the church was finally closed and Chapel Moran, Inc. purchased the building. 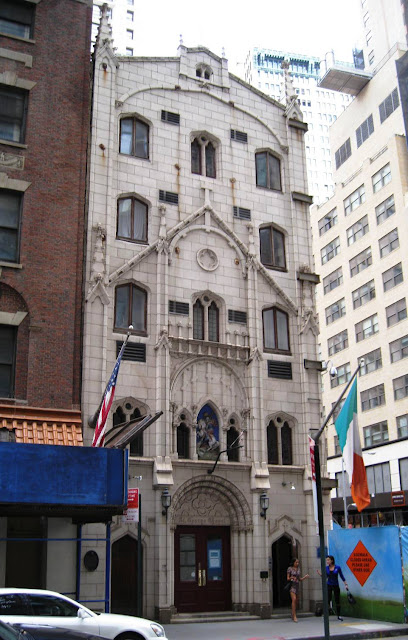 After over thirty years of preserving the former church, Moran’s Restaurant and Bar left in 2011; possibly late victims of the financial troubles in the area resulting from the disaster on 9/11.  Upstairs are apartments.  The astonishing Gothic building with its roots planted in 1812 is an arcane gem waiting to be discovered by urban explorers.