In 1892, when the theater district was slowly moving northward from West 23rd Street, Al Hayman and Frank Sanger planned a daring project.  Their theater for stock companies would be 25 blocks uptown on Broadway, just off the corner of 40th Street, where only a handful of theaters had tested the waters.

Hayman was confident that the neighborhood was the up-and-coming entertainment district.  Across the street was the Metropolitan Opera House which had opened nine years earlier.

The speculators hired the architectural firm of J. B. McElfatrick & Son to design the structure, which was completed in January 1893.  The impressive new theater cost $500,000 to build.  Five stories tall, it featured an immense arched double-height entranceway.  The two lower floors were constructed of Indiana limestone.  Paired Corinthian columns flanked the two large arched windows of the second floor, while the buff-colored brick-faced upper stories were much more restrained.  A brick and stone balustrade capped the uppermost cornice.

The lobby had black marble walls and etched glass doors.  To the left of the entrance was the ladies’ alcove with an Empire-style mahogany fireplace that rose 18 feet high and “comfortable seats.”  The glass ceiling, 35 feet above the ladie’s foyer, was back-lit by 150 electric lights.  A marble staircase lead down to the smoking room which was outfitted with library furniture. 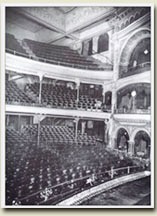 The crimson-and-gold themed auditorium seated around 1,200 patrons.  Charles Frohman, along with his partner William Harris, leased the theater which opened on January 25, 1893 with the debut performance of David Belasco’s “The Girl I left Behind Me.”  The show was a hit and ran for 288 consecutive performances and grossed an amazing $8,800 in ticket sales during its best week.  It was an important step in the development of Broadway as New York’s premier theater district.

The cavernous auditorium was luxuriously outfitted, causing Theodore Dreiser to write in his “Sister Carrie,” “At the Empire Theatre [Carrie] found a hive of peculiarly listless and indifferent individuals.  Everything ornately upholstered, everything carefully finished, everything remarkably reserved.”

Frohman continued to introduce the works of the leading playwrights of the day.   On February 15, 1894 Ibsen’s “A Doll’s House” was introduced and in August “Charley’s Aunt was first staged.  In the Fall of that year the cost of tickets for downstairs seating was raised to a seemingly exorbitant $2 each.

The Empire also ran an acting school and the students were regularly part of the cast.

Not every critic loved the idea of stock theater, however.   The November 1895 issue of The Cosmopolitan magazine complained that “no theater of repute in New York has been conducted on more purely commercial lines.  It has not developed artists, but has bought those already created.  It has not lent its energies to the production of untried plays, but has bought those which had already received the stamp of London approval.  The artists it employs are among the best of their kind.  Its plays are from the playwrights who have the greatest vogue in London, and who demand the highest royalties.  Notwithstanding all these guarantees of sure success, this theater has scored five failures this season, and no successes.”

On November 8, 1897 popular actor John Drew joined the cast of “A Marriage of Convenience,” by Sydney Grundy.  It would be a long-term relationship for both the actor and the theater.  On those occasions when Drew was ill or unable to perform, the theater was closed rather than using a stand-in.  Audiences did not come to the Empire to see someone else play Drew’s parts.  John Drew would be the main star attraction at the Empire for another twenty years.

Maude Adams, one of the 19th century’s equivalents of today’s screen celebrities, often appeared at the Empire.  But it was her creation of the role of Peter Pan in 1907 that theater goers would probably most remember at the Empire.

In 1915 Charles Frohman perished on the RMS Lusitania and Al Hayman took over the reins.  Hayman died two years later and his estate ran the theater.  Finally in 1931,in order to close his estate, the courts ordered the sale of the theater.

Within the next few decades, the Empire would be the venue for inventive theater.  Here, on December 7, 1925, Noel Coward’s  “Easy Virtue” opened.  Gertrude Stein’s all-black cast opera “Four Saints in Three Acts” premiered on April 2, 1934 and three years later George Bernard Shaw’s “Candida” was staged.  One of the Empire’s greatest hits opened in 1939 with the production of “Life with Father.”  The highly-popular play ran for six consecutive years. 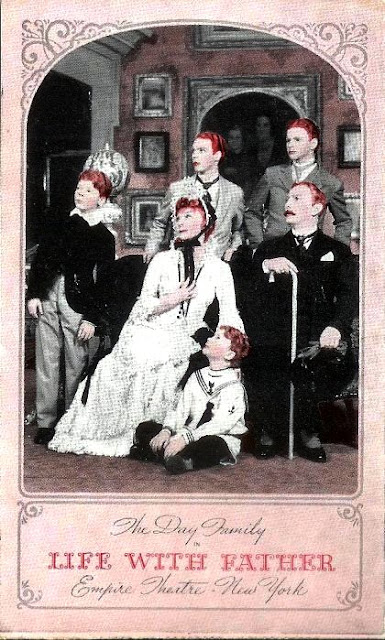 In 1946 32-year old Jacob Freidus bought the venerable Empire Theatre for $1 million.    Three years later, on January 4, 1949, Freidus sold the property to the Astor Estate.  It was the beginning of the end for the historic theater.

Actress Shirley Booth was preparing to appear in “The Time of the Cuckoo” in early Fall 1952 when the announcement was made that the theater would be destroyed to make room for a modern office building.   It was not just the audiences and actors who would lose a revered playhouse; Clara Borback had been head usher for 26 years, Alberta Ryland was matron of the ladies’ room for three decades and her husband, John Ryland worked there as superintendent for forty years.

On January 25, 1953, five months before the wrecking ball was scheduled to arrive, a celebration was held for the Empire’s 60th birthday.   On May 22, 56 leading performers gathered on stage for a farewell salute.  The actors performed scenes from plays that were staged there over the past 60 years.   A who’s-who of the American stage appeared:  Brandon de Wilde, Basil Rathbone, Maureen Stapleton, Ethel Waters, Shirley Booth, Ethel Barrymore and Mary Boland among them.

The New York Times lamented “For the Empire is both a shrine and a symbol to those who recall the golden age of our theatre, an age which reckoned not of movies, talkies, radio, television and other mechanical intruders.”

Nearly half a century before wide-spread historic preservation efforts that may have saved it, the Empire Theatre was demolished and an important piece of Broadway history obliterated.
Posted by Tom Miller at 2:43 AM