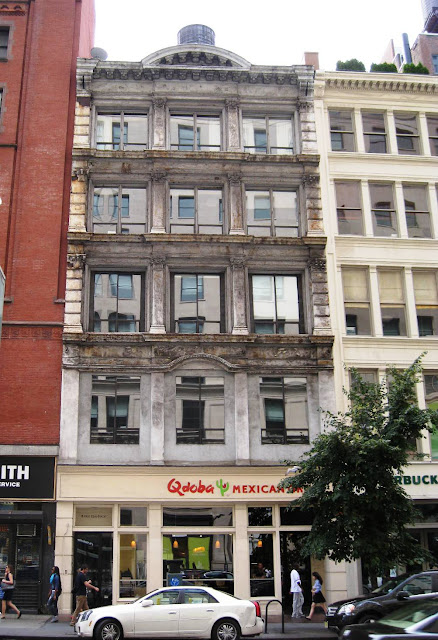 West 23rd Street near Madison Square was a most fashionable residential street in 1870.  Here at No. 12 the wealthy stockbroker Benjamin Nathan lived.   Next door at No. 14 was the Jones mansion where little Edith Newbold Jones was growing up.   The girl would become famous as Edith Wharton.

The munificent Benjamin Nathan spread his fortune around.  The New York Times would later say “No man was more unselfish, more generous in charity than he and none worked more indefatigably in all good works.”   He had donated half a million dollars to various charities.   He did not, however, deprive himself or his family of luxuries.

The 23rd Street house was, according to The Times, “lavish to excess.”  The newspaper described it as “one of the most elegant and spacious of the private residences of the City.”  The four-story house was home to his wife, Emily, and their seven children.  In the English basement were the kitchen and laundries; the dining room, butler’s pantries parlor and “spacious halls” were on the first floor while on the third and fourth floor were family bedrooms.     On the second floor was Nathan’s office, a reception room, bathrooms and a housekeeper’s room.

Unlike many Jewish New Yorkers at the time, Benjamin Nathan was welcomed into the main stream of wealthy society – he was a member of the St. Nicholas Society, which rarely accepted members not of Dutch ancestry, and the exclusive Union Club.

In the Spring, Nathan had rented a 45-acre country estate in Morristown, New Jersey.  The family was summering there, enjoying the private vineyards and gardens and rural breezes.   On July 28 Benjamin and his two grown sons, Washington, 22, and Frederick, 26, traveled back to the city.  The following morning prayers would be said for Benjamin’s mother at the Shearith Israel synagogue on the first-year anniversary of her death.

Of all his sons, the dashingly handsome Washington worried Benjamin the most.  He gambled and drank, spent too much money and haunted the city’s brothels.    The young man and his father fought repeatedly over his “habits of life,” prompting the millionaire to introduce a codicil to his will that placed his son’s inheritance in trust.  Only after Emily signed a declaration that he was “living a life of regularity and sobriety,” would he be able to touch his money;  and then only after he turned 25 years of age or married a Jew.  Until such time, Benjamin’s will proclaimed that allowing him the money would not “be safe, proper and advisable.”

That night of July 28 was dark and stormy.   Benjamin visited his sister with his sons, then went home alone in the rain.  The brothers went their separate ways into the night.

Because renovations were being done upstairs, a make-shift bedroom was thrown together for the 56-year old broker in the second floor reception room.   He undressed and went to bed wearing a long nightshirt.  Nearby were his clothes, piled on a chair.  Three large diamond studs were on the shirt and a heavy gold pocket watch and chain were in a pocket.  In his trousers was the key to the safe in his adjoining office.

On the same floor Ann Kelly, the housekeeper, was sleeping while her son, who was also employed as a servant, had retired to the garret.   Frederick came home shortly after midnight, checked in with his father who was still awake then went upstairs.   At 12:20 Washington came home, having visited a brothel.  His father’s door was opened, but the man was asleep by now, so he proceeded up the stairs.

Outside, Patrolman John Mangum walked his beat.  He passed by the house at 1:30 and tested the door – it was locked.  At 4:30 he passed again, and again the door was secure.  All seemed quiet and at peace inside No. 12 West 23rd Street.

Frederick rose at 5:45 the following morning and, still in his nightshirt and socks, heard his brother’s screams for help from the second floor.   He ran to his father’s room and there on a blood-soaked carpet lay his father’s body, bludgeoned beyond recognition.  “When I stepped up to his body I felt my stocking grow cold as the blood came upon them,” he told investigators.

Nine brutal gashes had crushed Nathan’s skull.  One hand was broken as testament to a mighty struggle.  The diamond studs and gold watch were gone and the safe was open, papers spilling onto the office floor.  Frederick rushed out the front door and cried “MURDER!” from the stoop.  Seconds later his brother in his blood soaked nightshirt followed.

Patrolman Magnum rushed into the house, finding a bloodied ship-carpenters “dog”—a device similar to a small iron crowbar--on the entrance hall floor.  Before long the house was filled with police.  Captain Kelso, Detectives Phil, Farley and Bennett, and Captain Henry Burden were all there when Superintendent John Jourdan arrived.   Jourdan was considered on a par with the fictitious Sherlock Holmes.  The New York Times at the time said “he has rarely failed when in pursuit of a criminal who has left even the faintest clue behind him.”

The case was puzzling at best.  That Benjamin Nathan could have been brutally murdered and not one of the four persons sleeping in the house heard a noise was baffling.  The street doors were all tightly locked, as Patrolman Magnum repeatedly testified.  And why was the murder so vicious if the motive was simply burglary?

Jourdan was flooded with letters offering leads.  Hundreds of tips came in.  Some people had revelations in their dreams.  A Brooklyn psychic offered help.  Suspicious persons were seen as far away as Wisconsin.  And several citizens pointed the finger at Washington Nathan.

One such letter, written by a someone lacking in spelling skills, read in part, “Sir:  I am of the opinion that the detectives know that Washington Nathan committed the murder upon his father and the merderer can pay twice the amount of the reward offered to screne himself.  Why has the detectives not obtaned a serch warrent and serched the whole and of Washington affects in the city and out of the city.”

The New York Stock Exchange offered a reward of $10,000 for the arrest and conviction of the murderer or murderers.  Emily G. Nathan offered more than $30,000 for information pertinent to the case.  But nothing was forthcoming.

Jourdan wrestled with other problems in the case.  The murder weapon disappeared from the police station.  A bundle of clothing was reportedly spirited from the house on the afternoon after the murder; yet the laundress who took the bundle would not speak to police.  The bloody carpet was sent to be cleaned the same day.  The stress of the case took its toll on the superintendent.  Police Captain George Washington Walling, in his book "Recollections of a New York Chief of Police," later recalled "From the day of Nathan's death, Jourdan failed.  He never made a step in advance, and died a few months afterwards."

The family moved out of No. 12 and into a grand Fifth Avenue mansion.  The 23rd Street house sat empty for years—no one would buy or rent in the murder home.

Washington Nathan continued with what the New York Times called the “wild course from which his father’s pleadings could not turn him.” Captain Walling would later recount "His liaisons became public and disgraceful."

He continued his drinking and gambling and whoring.   When he ran out of money, he lived off Fanny Barrett.  However when he came into some money of his own and did not need her anymore he picked up with an actress, Alice Harrison.  Fanny had the last say by shooting Washington in the jaw when he went to the Coleman House to pay his new sweetheart a visit.  The bullet was never removed.

Washington married and, with no friends in New York, moved to London and then to Paris.  He died alone in 1892, his obituary saying “He never seemed to find company there, being always alone and unattended and wearing upon his face the expression of a man utterly desolate.  His hair in his exile turned entirely white.  He was forty-four years old.”

The murder of Benjamin Nathan in the upstairs room at No. 12 West 23rd Street would never be solved.

As the turn of the century approached, West 23rd Street was no longer the fashionable residential street that the millionaire broker would have remembered.  The Jones house had been renovated to commercial use with a cast iron façade being screwed over it, as had the Nathan house.  In the 1890s Henry Plant’s Southern Express Company had its offices here.

The property remained in the Nathan family.  The Adams Express Company had uptown offices here at the turn of the century, then in 1903 the United States Trust Company signed a 15-year agreement at $25,000 a year.  Even now, over thirty years after the fact, the real estate notice mentioned that “This property was formerly the site of the dwelling in which Benjamin Nathan, its owner, was found murdered on the morning of July 30, 1870.  For several years it was impossible to secure a tenant for the house on account of its unpleasant associations.”

The United States Trust Company announced that it would raze the converted mansion to erect a “modern business building on the site.”  The firm changed its mind, however, almost immediately leasing the building to Solomon Tim.

A series of powerful gas explosions on the morning of March 8, 1914 nearly destroyed the building.   The blasts, centered at 23rd Street where Fifth Avenue and Broadway intersect, broke water mains, blew out scores of windows and flooded the subway to a depth of ten feet.  While the ground floor of No. 12 was essentially unscathed, “the wreckage in the three upper floors was practically complete,” as The Times reported.

A fifth floor was added to the structure sometime after this.  Today the street level houses a Mexican restaurant while small businesses occupy the upper floors.  The cast iron façade of the upper three floors is rusting and neglected and no one passing by No. 12 West 23rd Street would suspect that it is the scene of one of New York City’s most notorious murder cases.