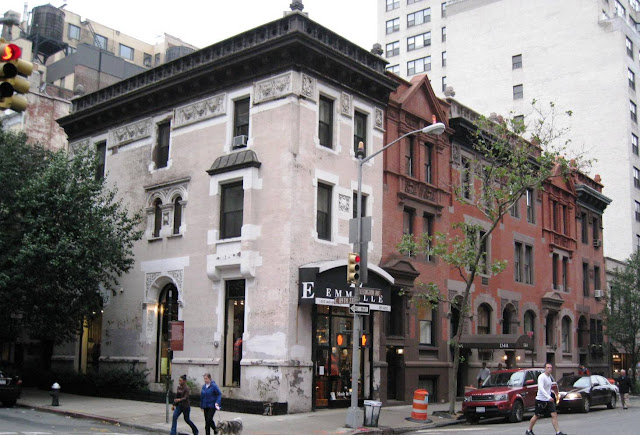 Until the middle of the 19th Century, wealthy New Yorkers not only lived in the city, but built elegant country estates in the rural north – areas like Bloomingdale (what is now the Upper West Side above 103rd Street), and Yorkville on the Upper East Side.

The Rhinelander family was no exception. Their summer home was near Archibald Gracie’s estate on rolling land cooled by its proximity to the East River. The area began developing as the New York and Harlem Railroad made the area easily accessible after 1834.  Rather than flee, the Rhinelanders purchased more and more land, acutely aware of the lucrative investment.

Beginning in 1880 the family, rather than sell of their land, began developing it – erecting houses and apartments for middle class families. The New York Times, in 1878, predicted that the family would hold onto its land, despite the death of patriarch William C. Rhinelander. “…the father inherited a strong bias toward the English method of keeping family estates together and regarding them as almost sacredly indivisible; and it is hence more than probably that he has expressed his wishes most decidedly upon that point.”

Among the new construction was a string of row houses and a matching apartment house at the northwest corner of Lexington Avenue and 89th Street.

The houses were part of a flurry of building in the immediate area that the family was doing – across the street Henry Hardenbergh had already designed a row of eleven French Renaissance-inspired houses and along East 89th Street were delightful and diminutive Queen Anne houses designed by Hubert & Pirsson.

For this project, the family commissioned Hardenbergh again. The architect designed harmonious but varied “Northern Renaissance Revival” houses rising three stories over an English basement. Constructed of brick, brownstone and terra cotta they were more restrained than their 89th Street Queen Anne neighbors; yet still managed to display a playfulness of style. 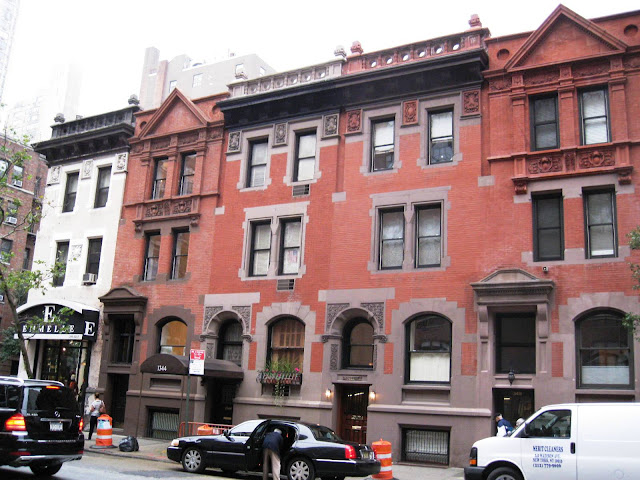 The perhaps unexpected choice of the trendy architectural styles was not due merely to the family’s desire to be au courant. They were well aware that the chic designs would attract tenants. In 1879 The Real Estate Record & Guide noted that “the Rhinelanders detest an unproductive estate. None know better than they how to adapt improvements to the capacities and requirements of a given neighborhood.”

The houses were home to a variety of tenants. Annie L. McDermott, a primary school teacher, lived in No. 1342 in 1888 while next door at No. 1342 was Dr. Edmund J. Palmer. Palmer lived here about five years, followed by the Reverend Benjamin Stone. Later, in 1931, Mary Trumbull who was active with the Association for the Preservation of Virginia Antiquities lived here, as did Dr. Edward J. Hornick in the 1950s, a Clinical Instructor in Psychiatry at the Albert Einstein Clinic.

None of the residents, however, would outshine the owner of No. 1342 from 1960 through 1972: artist Andy Warhol.
Changed had come to the six houses by then. In 1931 Lexington Avenue was widened and by necessity all sidewalk obstructions were removed. In the case of Nos. 1340-1350 this meant the loss of the stoops leading to the parlor floors. In 1940 all but one, No. 1340, were being operated as rooming houses by the Rhinelander Real Estate Company.

Warhol was doing well in 1960 when he purchased No. 1340. In his “Birth of the Cool: Beat, Bebop, and the American Avant-Garde,” Lewis MacAdams said the artist began filling the 13-room townhouse “with his growing holdings—cabinets full of Fiestaware, hundreds of cookie jars, grocery bags full of unmounted semi-precious stones, and piles of Navajo rugs and Kwakiutl masks, to name just a few of the objects he collected.”

Sunlight did not make an appearance into Warhol’s interiors. Curtains and blinds blanketed the windows, creating permanent nighttime.

Moving in with Warhol was his mother, Julia, who had lived with him at his previous apartment at 242 Lexington Avenue. The tensions between the two were such that, according to Warhol biographer Victor Bockris, “When they moved to 1342 Lexington Avenue she was relegated to the basement.”

While Warhol was by no means having financial problems, he neglected to pay his mortgage payments in November and December of 1967, prompting a stern warning.

Julia Warhol died on November 22, 1972 and her son sold the house not long after.

On May 5, 1998, the six houses and the little apartment building were grouped together as the “Hardenbergh/Rhinelander Historic District” by the Landmarks Preservation Commission.  Despite their unfortunate alterations—most notably the loss of the stoops and commercial space in No. 1340—the buildings are a charming surviving ensemble.

photographs taken by the author
Posted by Tom Miller at 5:15 AM