In the May 19, 1853 issue of the Columbus, Ohio newspaper Statesman of which he was owner and editor, Samuel S. Cox wrote about the sunset of the previous evening.  His goal was to prod the paper’s readers to appreciate life.   His flowery Victorian prose style gushed on and on.

“What a stormful sunset was that of last night!  How glorious the storm, and how splendid the setting of the sun!  We do not remember ever having seen the like on our round globe  The scene opened in the West, with the whole horizon full of golden, interpenetrating luster which colored the foliage, and brightened every object into its own rich dyes.  The colors grew deeper and richer until the golden luster was transfused into a storm cloud full of the finest lightning, which leaped in dazzling zigzags all around and over the city.”

Cox went on.  And on.  And then went on some more.  He was forever after known as Sunset Cox.

Born in Zanesville, Ohio to a political family, Cox went on to serve as Congressman from Ohio and later from New York.  In 1885 Grover Cleveland appointed him Ambassador to the Ottoman Empire.  After only one year, he returned to Washington again as New York’s Congressman.

Cox was a passionate orator, yet he would have undoubtedly passed into oblivion had he not aggressively fought for paid benefits and a 40-hour work week for the United States postal workers.  The Post Office employees dubbed him “the letter carriers’ friend” and the day after his death on September 10, 1889, they started a campaign to erect a monument to him in gratitude.

On September 11 a special meeting of the New York Letter Carriers’ Associate was held.  It was resolved that a committee be formed to collect subscriptions for “a suitable monument to be placed over the remains of the devoted friend of the Letter Carriers of the United States.”

At Cox’s funeral President Grover Cleveland and General William Sherman served as honorary pallbearers.  Among those attending was Louise Lawson, a young woman from a prestigious Ohio family.  Before long she would be even more connected with Samuel S. Cox.

On October 4, 1890 The Illustrated American noted that “Louise Lawson is the sculptress who has been selected by the letter-carriers of the United States to execute a statue of the late Congressman Samuel S. Cox.”  The article told of Lawson’s hard work and artistic study – she trained under Rodin in Paris for a year.  It hinted of her privileged upbringing, as well.  “Many American girls visit those homes of art and are obliged to undergo privations and physical suffering in order to study in the best schools,” it said.  “Miss Lawson’s experiences have not included life in a garret sustained by stray crusts.”

This was the first important commission Lawson had won and The Illustrated American was impressed on how quickly she obtained it.  “It is, of course, the most important she has yet received.  Fame is usually slow in helping forward young sculptors, and few of the men of that profession whose names are now famous achieved public recognition in so short a time as has Miss Lawson.”

The accolades would be short-lived.

The site for the statue was chosen not “over the remains” of Cox as the letter carriers had originally planned, but in Astor Place at Fourth Avenue.  Costing over $10,000 ($8,965 of which went directly to the artist), it was dedicated on July 4, 1891.  Two thousand letter carriers turned out from Brooklyn and New York alone.   Bands and drum corps provided music for a parade that started up Broadway from the Post Office at City Hall Park.

The New York Times was impressed by the appearance of the postal workers.  “Every man wore white gloves and had a white tie over his collar button,” it reported and “the fat fellows were in a sad minority.”

Lawson’s 8-foot bronze statue depicted Cox speaking in Congress.  The granite pedestal was 12 feet high.  When the American flag was removed The Times issued the first artistic critique.  “Whether it will ever be greatly admired as a work of art is doubtful.”

The Sun’s Guide to New York did not hold back either, saying “It is a stiff, inartistic affair.”

A year after the statue’s dedication, the Board of Aldermen met and resolved “that four lamps be placed about the statue of 'Sunset' Cox in Astor Place.”

The postal employees ignored the critics.   Additional donations were gathered and two additional bronze plaques were added to the pedestal.  One announced “Erected in Grateful and Loving Memory of His Services in Congress” while the other contained the names of the 187 cities in the United States from which contributions were sent.

Four years to the day after its dedication, the statue was turned over to the City by the postal workers.    The monument was draped in flags and flowers and large potted plants were arranged around it.  Louise Lawson was on the platform with Mrs. Cox and city dignitaries.  Games and entertainments had been planned following the formal ceremony, however a severe rainstorm spoiled the day.

Twenty-eight years after its unveiling, the statue should have been safe from further critique; but it was not to be.  The New York Times’ art critic Layton Crippen attacked vehemently.  In the May 7, 1899 New York Times illustrated magazine, he wrote “It has never been alleged…that the figure of Samuel S. Cox, in Astor Place, is a thing of beauty.  But it is equally certain that it is not decorative, and if its surroundings were in harmony with it the City of New York would have to be deserted.”

As plans were being made to extend Lafayette Street, it became obvious that the Cox statue would have to be relocated.   The question was where to put it.  On May 21, 1905 The Times argued that “the statue of ‘Sunset’ Cox, now on its travels, having been crowded out of Astor Place, would gain an explanation of its existence, and as much effect as its character would allow, if it were seen in connection with the Post Office, the subject’s services to the occupants of which it commemorates.”

The monument, which a Times reader in 1904 deemed “the unfortunate statue of Sunset Cox,” was moved to the southwest corner of Tompkins Square Park in November 1924.  Samuel Cox stands with his back squarely to the park, facing East 7th Street instead.

The late 20th Century was not kind to fountains and monuments in Tompkins Square and Samuel Cox’s statue was in sad shape by 1998.  That year the City Parks Foundation Monuments Conservation Program restored it.  The statue was cleaned, repatined, and received a protective coating.  The granite was cleaned and the lettering restored. 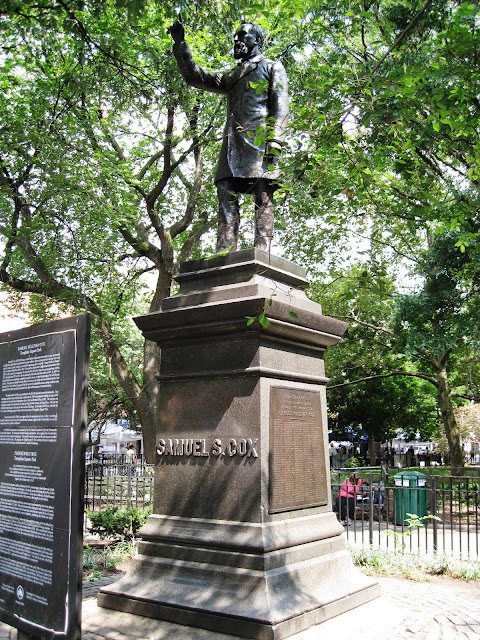 Louise Lawson’s first commission no longer gets brutal artistic criticism; however the statue is fondly called “Taxi” by locals because of the congressman’s upraised finger, appearing to hail a cab.

non-credited photographs taken by the author.
Posted by Tom Miller at 3:11 AM