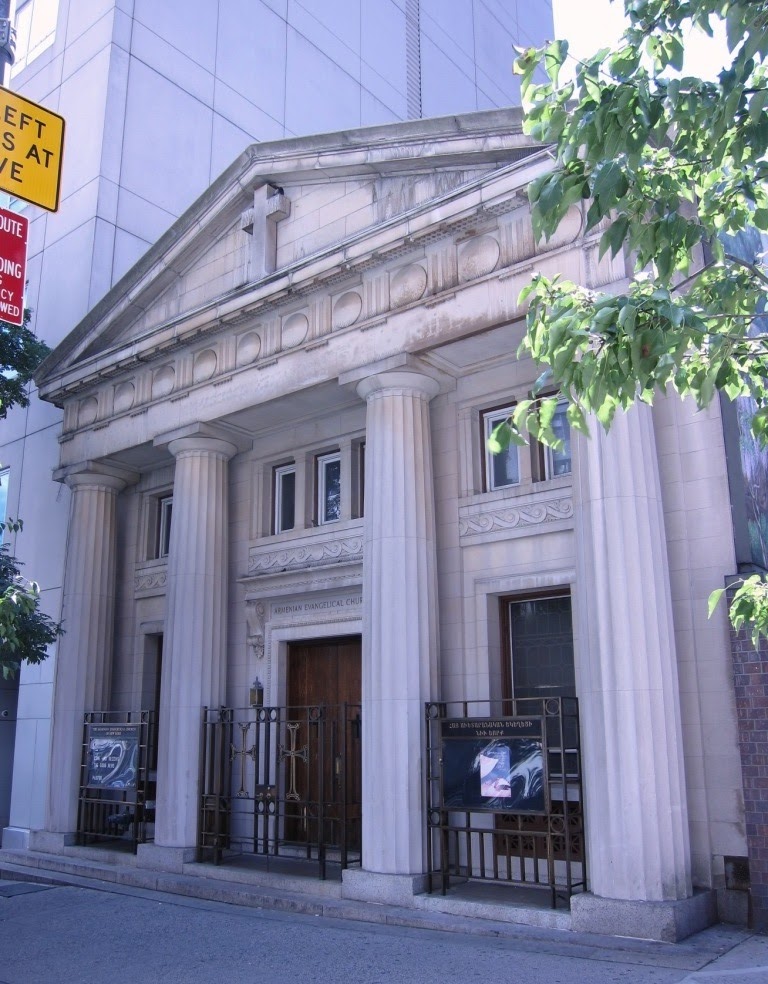 In 1906 the 19th Ward Bank was experiencing an encouraging boom in business. To meet the needs of its depositors, William Ralph Emerson (a cousin of poet Ralph Waldo Emerson) was commissioned to build a branch bank uptown at 180 East 72nd Street.

Emerson created on the narrow plot a dignified Greek temple with a classic portico supported by two heroic columns. Despite the restrictions of the skinny lot, the architect produced an attractive bank that exuded solidity and confidence.

Apparently the bank officers approved of his design because a year later he was re-hired to design the firm’s fifth branch – this one on East 34th Street between Lexington and Third Avenues. The wide and impressive home of Dr. Arthur H. Cilley, an expert on tuberculosis, was razed and in its place rose another Greek temple to banking. The dimensions of this lot, however, allowed for classic dimensions that resulted in a much more impressive structure.

Although it was a small bank building, its presence was grand. Four imposing fluted Doric columns supported the closed pediment. The overall sense was as much temple as bank.

Construction was begun in February 1907. The bank was expanding and its outlook was promising. In the past four years deposits had increased from $1.5 million to $5 million. But the road for the 19th Ward Bank was soon to turn rocky.

In October there was a run on the banks that had lent money in a failed scheme to corner the market on United Copper Company stock. Before long panic spread to affiliated banks. A week later the Knickerbocker Trust Company, the third largest trust in New York City, failed. The Financial Panic of 1907 was well under way.

The 19th Ward Bank, along with the 12th Ward Bank, came under the control of the Van Norden Trust Company. Two years later the Carnegie Trust Company formed a syndicate that absorbed them all, saving the institutions from failure and securing the interests of the depositors.

Before long, however, the little branch on East 34th Street would no longer be needed.

In the meantime what had been a tiny Armenian population in New York was burgeoning. Persecution in Turkey – resulting in massacres at times – drove more and more Armenians to the United States around the turn of the century.

The Armenian Evangelical Church of New York started out in 1881 holding services in the home of Reverand Garabed Nergararian and, by the time the 19th Ward Bank was sitting empty, had been borrowing space in the Adams Memorial Presbyterian Church on East 30th Street.

In 1921 the church purchased the bank building and, after two years of renovations, dedicated it on Christmas Sunday 1923. Where teller cages and transaction counters once stood were now pews. The deep, long space lent itself handsomely to use as a house of worship.

A year later an exquisite stained glass memorial was dedicated, the work of Armenian artist Hovsep Pushman and a Skinner pipe organ was installed.

The little Greek temple building continues to quietly serve the Armenian community on bustling East 34th Street. In 1985 the church sold its air rights to an apartment building developer and, with the resultant funds, initiated a restoration and renovation of the structure.

A decade later the now-historic Skinner organ was restored by the J. G. Saenger Instruments firm of Topton, Pennsylvania.

Over the decades, William Ralph Emerson’s classic Greek bank building has been dwarfed by surrounding skyscrapers. Yet it still manages to emanate a sense of tranquility and charm amid the raucous 34th Street traffic.

Non credited photographs taken by the author
Posted by Tom Miller at 3:02 AM