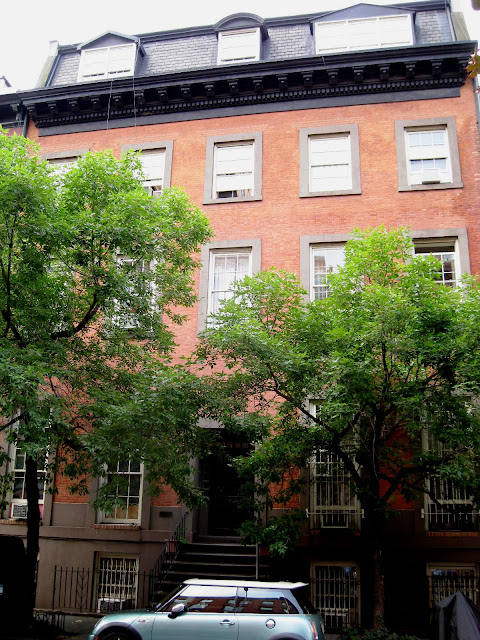 James N. Wells established his real estate business in 1819.  By 1833 he was living and running the business dealings from the quaint brick house at 183 9th Avenue. As Clement Moore broke his sprawling estate, Chelsea, into plots he collaborated with Wells on the sale and development of the sites.

The unflagging Wells was instrumental in transforming Chelsea from meadows and farmland into a rapidly growing residential and commercial section.  And it made him a small fortune in the meantime.

In 1835 Wells completed his own grand town house at No. 414 West 22nd Street, just about a block from his office. Its Greek Revival design was just appearing and its exceptional width stretching five bays across – over twice the size of an average lot—allowed a symmetrical balance seldom enjoyed by contemporary rowhouses.

The house was three stories tall over a deep brownstone English basement. A centered entrance led to a central stair hall with matching parlors on either side.

Two years after the home’s completion the Financial Panic of 1837 and the subsequent depression brought development in Chelsea to a virtual standstill for a few years; however Wells’ business survived and soon thrived again.

While the Civil War was raging to the South, the Wells House got a makeover sometime between 1864 and 1866, including a fashionable mansard roof to bring it up to date.

In 1867 The Samaritan Home for the Aged was founded in an effort to relieve the overcrowded conditions of other old age homes. It advertised itself as “a permanent home for aged, friendless, indigent persons, of good character, of both sexes, over 65 years of age, and of all Protestant denominations.”  The home was supported by voluntary contributions, a $250 entrance fee (a sizable amount in 1867), and bequeaths.

By 1870 the Home needed a permanent building and No. 414 was purchased.  King’s Handbook of New York City called “a cheerful and commodious home,”  The following year in an effort to make the mortgage payments, Sophie B. D. Denny wrote to the Board of Estimate and Apportionment.

In her letter she pled, “We have been and are continuing to use every effort in our power to lawfully and respectably raise our treasury from its present very low state, but should feel so encouraged and rewarded could we occasionally be remembered among the innumerable donations to the many charities of the metropolis.

“Fifty souls we already have under our care; $25,000 would be so acceptable.”

Ms. Denny’s plea apparently did not reap the harvest she wanted, and by the beginning of 1885 the institution was in trouble.

On January 27 of that year The New York Times reported on the home’s financial worries. “At the close of its eighteenth year the Home finds itself with 16 men and 20 women under its charge and an indebtedness of $2,000 in the shape of a mortgage on its property.”  Donations, which The Times called “a change to help the aged poor,” were “earnestly solicited by the manager.”

Within three years the Home had turned the financial corner. The number of inmates had increased to 47 but donations rose to $15,729 with expenditures of $15,442 and a permanent fund of $20,000.

Partial credit for the turn of events could be placed on the St. Valentine’s Kettledrum. Organized by socialites to aid the Home, it was a strange mixture of bazaar, dinner party and dance. The event became an annual affair that lasted for decades – well into the 1920s.

In 1892 The Times reported that “For twenty years these events have been very fashionable affairs and great financial successes. Last year $3,000 was cleared and everything points toward as large receipts to-day.” Listed among “the ladies interested” was Mrs. William K. Vanderbilt and, according to the newspaper, “the rich society people of the city have allowed no engagement to interfere with their attending the annual St. Valentine’s kettledrum in aid of the Samaritan Home for the Aged.”

At the turn of the century there were 19 men and 15 women residing at the home, one of whom had been there seventeen years.  A year later, in 1901, Philip F. Olwell, attending to his obligations as a good citizen, left the Home to register to vote.  Mr. Olwell was turned away because he lived in an institution and, therefore, had no right to vote.

When he sued, he lost the court case. The verdict was appealed in Supreme Court. He lost again. The judgment read “A person residing at the Samaritan Home for the Aged does not, by such residence, acquire the right to vote at elections within the district wherein such home is located.”

It would be years – too late for Philip Olwell—before the injustice was reversed.

On May 27, 1929 the cornerstone for the new Samaritan Home for the Aged was laid at 440 East 88th Street.  The aged brick residence was taken over as the Women’s Emergency Lodge of the Salvation Army where needy women were given shelter until 1952.  That year the Lodge was moved to 11 Dominick Street.

The following year the house was renovated into 25 furnished rooms and, in 1971, modernized again as 30 apartments.

Today most of the architectural detailing of No. 414 West 22nd Street has been stripped away. The brownstone window surrounds have been shaved flat, even with the brick façade and the once-elegant doorway is by no means elegant.

But the super-wide mansion of James N. Wells still exudes the grace and elegance that was.