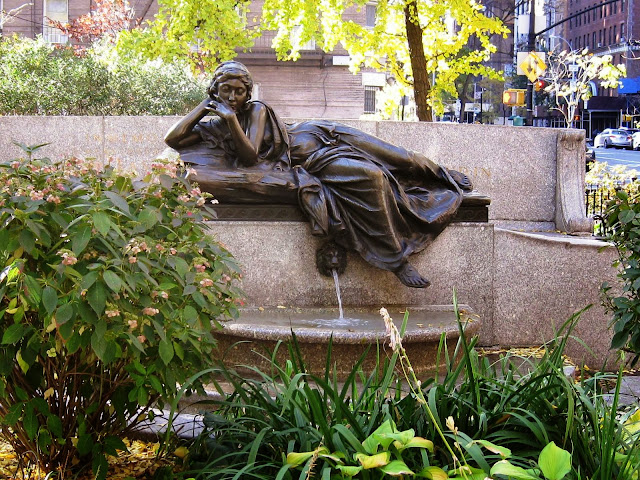 On April 19, 1912, just four days after the sinking of the RMS Titanic, Alfred Crawford testified before the United States Senate committee investigating the disaster.  Crawford had been a stateroom steward on the doomed ship.  The man was asked if he knew Mrs. Isidor Straus.  He did.

Isidor Straus and his wife, Ida, had been returning home to New York on the RMS Titanic.  Straus was a co-owner with his brothers of R. H. Macy & Co. department store, as well as the Abraham & Straus department store in Brooklyn.   The 67-year-old was also a director of several banks and vice president of the Chamber of Commerce.  He was highly regarded for his generosity.  The New York Times would call him “a supporter of almost every philanthropic and charitable institution in New York, regardless of creed.”

Chester testified that he was in a lifeboat and took Ida Straus’ hand to help her in.  “She started to get in, but then changed her mind and went back.”

Ida Straus had looked back to her husband of 41 years standing on the deck and let go of Chester’s hand.  “We have been together a number of years,” she said to her husband.  “Where you will go I will go.”  She then instructed her maid to take her place on the lifeboat.

The couple was mourned nationwide, but nowhere so deeply as in New York City.  Four weeks later, a memorial service was held for them in Carnegie Hall where thousands crammed into the auditorium.  “The great hall was filled to capacity, and hundreds who pleaded to get in were turned away because there was no more room inside.  Every seat and every box was occupied, while perhaps 300 men and women stood up in the rear of the auditorium,” reported The New York Times.

During the ceremony, Jacob H. Schiff mentioned Ida’s devotion to her husband.  “There is no doubt that in the awful hour when the Titanic sank that the noble woman broke not the oath that she had given at the altar, ‘Until death do us part.’”

The cable ship Mackay-Bennett recovered Isidor Straus’s body which was buried in Woodlawn Cemetery.  Ida was never found, but the Straus tomb includes an empty spot next to her husband.

The Straus home stood at 27-47 Broadway, near 105th Street, within sight of a small, triangular park called Bloomingdale Square.  On July 2, 1912, the Board of Aldermen adopted the resolution directing that the park “is hereby named and shall hereafter be known and designated as ‘Straus Park.’”

A move to erect a memorial to the couple was immediate and subscriptions poured in.  By the fall, $20,000 had been received.   A competition for the memorial's design was held and in November the Magazine of Art reported that “The prize was awarded to Mr. Augustus Lukeman, the collaborating architect being Mr. Evarts Tracy.”

The compact, oddly shaped park made designing an appropriate memorial difficult.  “It was finally concluded that anything mainly monumental would not be desirable both because of the modesty of Mr. and Mrs. Straus and because the site selected is a small triangular park with a background of apartment houses which would not serve as a proper frame for anything very high,” explained the magazine.

Luckman’s design, one of 59 submissions, included a serene lily pond fed by a two-tiered fountain.  Above the fountain was a reclining bronze figure of a contemplative female upon a granite ledge.  Luckman called his memorial, Memory.

Behind the sculpture a granite bench provided a place of rest for those visiting the memorial.  The Straus Memorial, paid for entirely by public donations, was dedicated on April 15, 1915, three years to the day after the sinking of the RMS Titanic.  The New York Times called it “one of the most beautiful monuments of its kind in the country.”

The neighborhood around the Straus Memorial declined in the latter half of the 20th century, and by 2007 the memorial had suffered some abuse.  That year the Parks’ Monuments Conservation Program initiated a restoration, sponsored mostly by The History Channel. 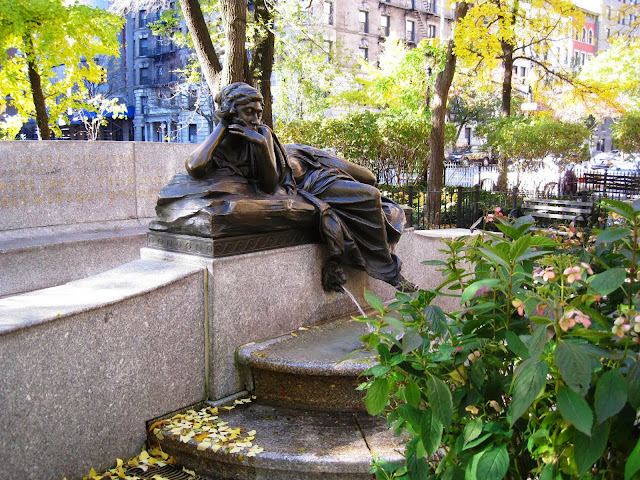