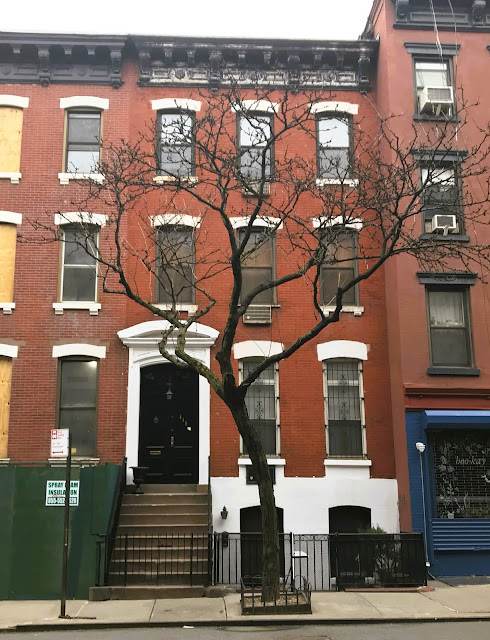 In the years following the end of the Civil War, George H. Page and his family occupied the three-story and basement house at 301 West 50th Street (renumbered 449 in 1868).  One of a pair of identical residences, the 20-foot-wide home was faced in red brick and trimmed in brownstone.  Its elliptically arched openings were the latest in domestic style.  The double-doored entrance sat below a handsome arched pediment, and an ornate bracketed cornice crowned the design.
Page was the head of George H. Page & Co., dealers in "steam warming apparatus," at 135 Mercer Street.  He sold the West 50th Street house in 1870 to Theodore Miller.
The 53-year-0ld Miller was in the brass business when the family moved in, but in 1873 changed courses, opening a furniture store at 1277 Broadway.  He and his wife Catherine, had a son, Theodore Jr., who joined his father in the new business.
It seems likely that Miller had anglicized his surname from Müller upon arriving in America.  He was a member of the German language Liederkranz, a men's singing club.  And Catherine changed the spelling of her first name, which was sometimes noted as Katharina on legal documents.
The family initially took in boarders for additional income.  In 1870 four working class men and one widow lived with the Millers.  But beginning in 1873, only the family was listed here.
Theodore Sr. died at the age of 58 on May 17, 1875.  His funeral was held in the parlor two days later.  Catherine and Theodore Jr. remained at 449 West 50th Street.  He changed his profession in 1876 to real estate agent.  It was apparently through his professional guidance that his mother's financial condition noticeably improved.
By the mid-1880's, the woman who had once had to crowd her home with boarders was dealing in real estate.  She owned and leased the house next door at 447 West 50th Street.  And on August 30, 1884, the Record & Guide reported that she had hired the architectural firm of A. Pfund & Son to erect a four-story brick store and tenement on Tenth Avenue at 48th Street.  In the late 1880's and early 1890's, Catherine was actively buying and selling real estate in Brooklyn. 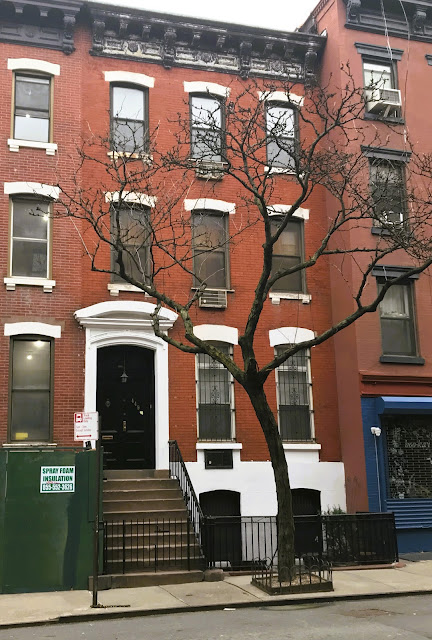 By then she had left 449 West 50th Street.  She sold it to Katharina Leinbach in 1885 for $12,500, about $363,000 in 2023 terms.  The house was being operated as a boarding house by the early 1890's, home to respectable working class tenants, like James O'Connell, a worker in the city's Department of Street Cleaning.  (O'Connell earned $2 per day in 1889--around $60 in 2023.)
Living here in 1894 was David Crothers, a streetcar conductor with the Belt Line.  He was on the back of his car on the night of August 14 that year when 13-year-old Stephen Mock jumped on the platform and "ran his hand into his change pocket, securing a handful of nickels," as reported by The Evening World.  Before Crothers could react the boy jumped off, but as he did so he dropped most of the coins.  "A dozen boys were on the street in an instant scrambling for the money."
Unfortunately for Mock, also witnessing the crime was Policeman Moran.  He chased the delinquent through the trucks parked along the street, finally catching him.  The teen appeared before Judge Martin in the Court of General Sessions the following day.  There the Gerry Society (the Society for the Prevention of Cruelty to Children), presented his record, which showed he had been previously released on charges of stealing a horse and buggy, and for burglarizing a store.  This time the judge was not so lenient.  Although his stumble off the streetcar had netted him only 55 cents, he was held on $1,500 bail for trial.
Like Crothers, most of the boarders at 449 West 40th Street were Irish-born.  Living here in  1895 was Thomas J. Doane, who was appointed an election captain that year.  Andrew J. Cooley, a motorman on the Sixth Avenue streetcar line, was a resident in 1898; and in 1909 Francis P. Hughes lived here while working as a policeman.
Another Irish policeman, James Conway, purchased the house before the outbreak of World War I.  He retired with the rank of sergeant, earning a yearly pension of $750 in 1918 (about $13,500 in 2023).  Like Catharine Miller, the widower invested in real estate and owned a house in Brooklyn at 72 Dikeman Street.  Sharing 449 West 50th Street with him was his son, Thomas J. Conway.
James Conway died in 1921.  He was generous in his will, giving donations to three Hell's Kitchen churches--the Roman Catholic Church of St. Ambrose, the Church of the Sacred Heart, and the Church of the Assumption--and bequeathing $1,000 to his brother Patrick.  Thomas received the bulk of the estate, including the Brooklyn house.
James Conway had apparently had a warm relationship with his Brooklyn tenant, Mary Ann Donegan.  He left her $400, "together with my sewing machine."  His will also stipulated, "I direct that as long as said Mary Ann Donegan shall remain a tenant of my real property at 72 Dikeman Street...her rent shall be no greater than Ten ($10.) Dollars a month."
Thomas Conway's relationship with Donegan was not so warm.  He took his inherited tenant to court to evict her.  He explained that his expenses greatly outweighed the $120 per year rent she was paying.  Mary Ann Donegan, who had witnessed the James Conway's will, protested that it made her a life tenant.  The judge agreed with Conway and Mary Ann, with her sewing machine, was soon looking for a new place to live. 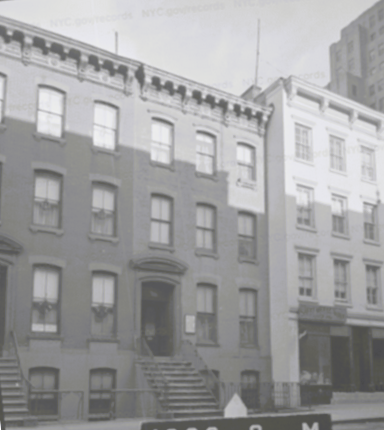 A sign for rented rooms is attached to the facade in 1941.  The top floor molded lintels survived at the time.  image via the NYC Dept of Records & Information Services.
The Hell's Kitchen neighborhood was blighted with poverty in the 1920's.  Renting a rooms at 449 West 50th Street in 1927 were Harry Bakuyian, his wife Aileen, and their six-year-old son, Edward.  When Harry was hospitalized for a long term, Aileen was forced to find work, leaving little Eddy to his own devices.  He worked out a scheme by which to become rich.
Early in 1928, Patrolman John Creehan came across the boy and his dog Boozey performing at the Shubert Alley Bus Terminal behind the Hotel Astor.  Eddy "had neither coat nor hat and was waring a pair of trousers which admitted the winter blasts at several places," wrote The Pawling Chronicle.  Creehan stopped the show and prepared to take the boy and his dog to the station house.
Eddy pleaded his case:

Now see here, mister.  I'm six years old and I've got a living to make.  This here dog of mine is an expert dog.  We give shows all over town.  Boozey, say "how-do-you do" to the cop.

The dog, who had a piece of rope attached to his collar, sat up on his haunches and barked.  Passengers waiting for their busses insisted that they had gotten their dime's or quarter's worth of a show, but Creehan was more concerned that the boy was so poorly clothed in the winter weather.  He again started off to the station.
Eddy cried, "Have a heart, won't you, mister?  I can't make no money in a police station.  My father's sick in the hospital and my mother has to go out to work, so I got to take care of myself, see?  We got to get a start this way.  Boozey and me are going to be on the stage some day."
Despite their performing a repertoire of canine tricks for the policeman, the boy and dog were taken to the back room of the station house.  When his mother arrived, she confirmed his story about her having to work and his father's being hospitalized.  The Pawling Chronicle reported she told the officers that "since he had found Boozey and had taught the dog tricks, she had spent a great deal of her time retrieving them both from the various police stations."  Both inmates were released to the custody of Mrs. Bakulian. 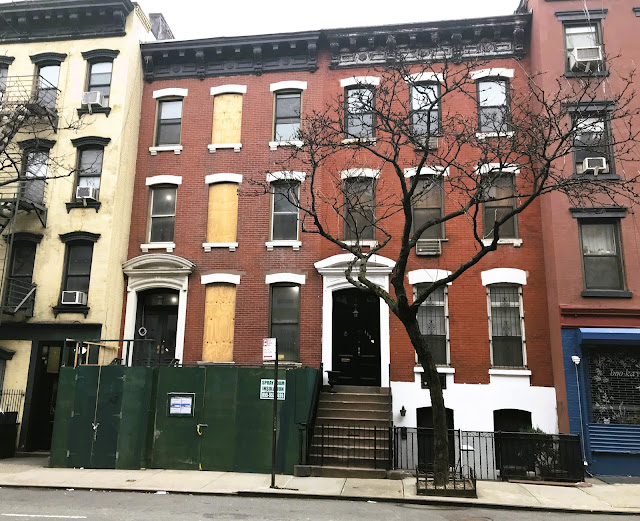 The house contains two duplex apartments today.  It and its twin next door have been shorn of their molded lintels, and yet are otherwise mostly intact.
photographs by the author
no permission to reuse the content of this blog has been granted to LaptrinhX.com
Posted by Tom Miller at 1:00 AM