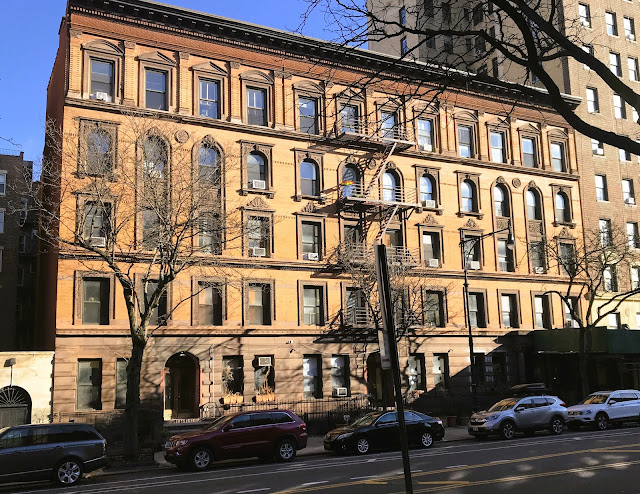 Real estate developer Walter D. Starr had big plans for his newly-acquired vacant lot on West 106th Street between Amsterdam Avenue and Broadway in 1894.  He commissioned the architectural firm of Neville & Bagge to design three five-story "stone front flats" on the site.  But then something went wrong.  On March 2, 1895 the Record & Guide reported that he had sold the "projected" buildings to Matthew C. Kervan.
Kervan forged ahead with the upscale project.  Neville & Bagge's plans, which estimated the total construction cost at $115,000 (about $3.83 million in 2023), included modern amenities like "steam-heating, hardwood trim, electric bells, metal cornice, etc."  (The electric bells would summon servants to the dining rooms, parlors, or bedrooms.)
Neville & Bagge produced three handsome, identical structures, each four bays wide and five stories tall.  Short stone stoops with beefy newels and substantial, pierced wing walls rose to the entrances, centered within the rusticated brownstone bases.  Dignified porticos supported by fluted Scamozzi columns graced the entrances.  The upper floors were faced in warm Roman brick and trimmed in brownstone.  The architects drew inspiration from Florentine palazzi in the frames and pediments of the windows.  Together, the row created a courtly presence along the block. 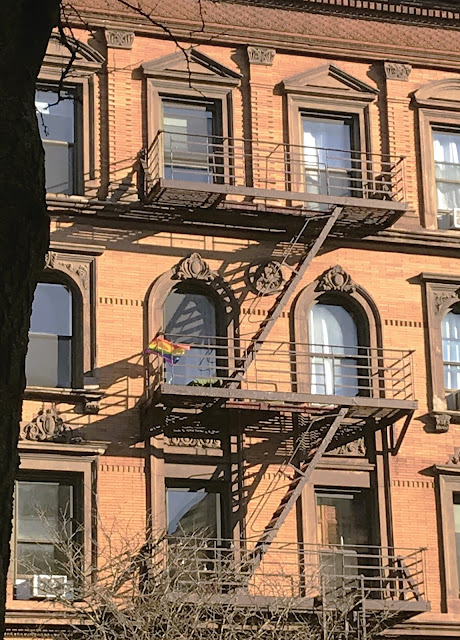 There were two apartments of seven and eight rooms each per floor.  An advertisement noted the buildings sat on a "private house block" with "asphalted street" and provided "hall attendance."  (Uniformed hall boys provided services like bringing packages to the door, taking mail, and such.)  Rents ranged from $80 to $95 per month, or about $3,200 today for the more expensive.
The apartments filled with well-to-do professionals, like Bryant Harmon Blood and his wife, the former Gertrude Woodard Langley.  They couple most likely met at Cornell University.  Two years after their graduations in 1889 they were married.  The Bloods were among the initial residents of 215 West 106th Street.
Unlike Gertrude Blood, who taught Latin, most of the female tenants had no professions, and busied themselves with clubs and teas.  Among Gertrude's neighbors in 215, for instance, was Mrs. E. F. Chadwick, whose name annually appeared in Club Women of New York.
Columbus Gerhardt Ely, his wife Sarah, and her daughter Ruth Ann Stetter from a previous marriage, were initial residents of 217 West 106th Street.  Following Ruth's marriage to John Fairchild VanLaun in 1899, she and her husband moved into the apartment.  Sarah Ely sent out wedding announcements in November that noted, "At Home, Thursdays in December."
An early resident of 219 West 106 Street was William C. Montanye, a wholesale coffee and spice dealer.  His father had established the business on Barclay Street in 1843 and William still operated from the original space. 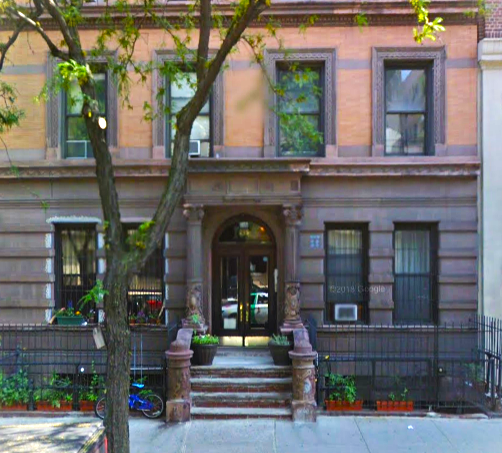 Originally, each of the buildings boasted handsome stoops and porticos.  image via Google Streetview
Robert Milton Smith was a sales manager for the Buda Company, a railroad supplies concern.  In April 1907 he was in Chicago, where he saw a beautiful young actress, Lillian Halliman, on the stage.  Within a month the couple was married.  Smith's bride was 16 years old.
It is unclear whether he was aware that she had married Frank Cuddihy, a member of a Pittsburgh steel family, three months earlier.  Lillian's parents, "who are socially prominent in Florida," according to her lawyer, objected to the marriage and had it annulled around the time she met Smith.  According to The New York Press, "Despite the unhappy matrimonial venture she had made so short a time before, the girl consented to marry Smith in May...They came to New York to live and apparently were happy."
Lillian gave up the stage and the Smiths moved into 215 West 106th Street.  Things seemed to be going smoothly until May 5, 1911, when The New York Press reported that Smith was suing Lillian for divorce, alleging she "misconducted herself with an unknown man on December 14, 1910 in No. 215 West 106th Street."
Lillian, now 19 years old, protested the charges, but she realized her reputation was already ruined.  The told a reporter, "It is a great misfortune for a girl to find herself in a position of this kind, for no matter if I succeed in disproving the accusations he makes, my reputation will suffer."  She added, "I guess my parents were right, for I have had more than my share of unhappiness through marriage."
The young woman realized her only option was to return to acting.  "I intent to return to the stage.  I feel confident my husband will not be able to prove his charges against me, but nevertheless, I will resume the profession which I gave up to be his wife.  The stage must be my future and I shall work hard to succeed."
America's entry into World War I affected several of the families with the row.  Fabien Frederick LeFebvre and his wife Lucetria Agnes lived in 215 at the time.  Among their five children was Francis Fabian Joseph, known familiarly as Frank. He joined the Naval Reserve Force in April 1917 and was stationed on Long Island where he guarded the coast against invasion from the water.
On December 27, 1917, the Evening Express wrote, "Not all the instances of heroism in the United States Navy come from across the sea."  LeFebvre, who was a second class seaman at the time, was on the  patrol boat Jimetta off Glenwood Landing, Long Island.  He witnessed a small boat with a man, his wife, and their son and daughter on board be swept against the wharf and capsized.  The article said, ""LeFebre [sic] dove from the ship into a heavy tide and supported the man and wife until they were rescued"  LeFebvre "battled with the tide in this dangerous position until all three reached safety."  (Happily, the two children were also rescued.)
On April 4, 1918 John Francis Hession left for training camp.  He lived at 217 West 106th Street with his parents, Frank P. and Anne E. Doyle Hession, and his brother Paul.  He was deployed to France as a private, keeping in touch with his family by letters.  In November 1918, they received one dated September 25, that must have filled them with dread.  John's unit was about to engage in battle near Cambral, France:

I am about to enter one of the biggest events of not only my life but of the war.  May the good God help and protect us, for I think that if we succeed in this one thing there will be little fighting thereafter...Do not worry about me, dear folks--just a little prayer.  No matter how tired I am I never go to sleep without thinking of all of you.  May God spare me to be with you again.  Bye-bye for a while.  When I come out the first thing I will do is to write.

John Hession would never right that promised letter.  He was killed in battle four days after writing the first one.  His body was shipped back to New York where his funeral was held in the Church of the Ascension on West 107th Street on December 3.
The buildings were home to several entertainment figures following the war.  Twenty-year-old May McAvoy lived at 217 West 106th Street in 1921.  She had debuted as an extra in the silent film Hate in 1917, and had contributed somewhat to the war effort by appearing in To Hell with the Kaiser! in 1918. 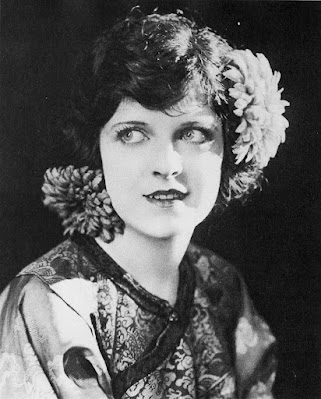 May McAvoy, from Stars of the Photoplay, 1922 (copyright expired)
By now she had a resume of 20 film roles.  She would not only appear in the 1927 film The Jazz Singer with Al Jolson, but had coached him during his film debut in A Plantation Act the previous year.
Also living in 217 was attorney and composer Don Valentine Harwood and his wife, the former Alice Lawlor.  Sharing their apartment was Alice's parents.  Her father, Charles B. Lawlor, had been a long-time vaudevillian entertainer before losing his eyesight. 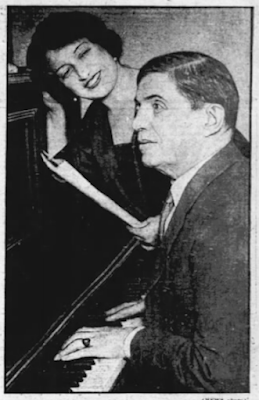 Charles B. Lawlor posed at the piano in the 106th Street apartment with his daughter, Alice.  Daily News, June 1, 1925
Lawlor had written many songs for vaudeville, including "The Mick Who Threw the Brick," "The Best in the House is None Too Good for Riley," and I'm Coming Back to You, Old Tipperary."  But none was better known than his 1894 "The Sidewalks of New York."  In each of his failed presidential campaigns--in 1920, 1924 and 1928--Governor Al Smith used it as his theme song.
On June 1, 1925, The St. Louis Star & Times reported, "Charles B. Lawlor, author of 'The Sidewalks of New York,'...died in his daughter's arms yesterday at his home, 217 West One Hundred and Sixth street.  He was 73 years old, blind and had been on the vaudeville stage for sixty years."
Two years earlier, 217 and 219 West 106th Street had been sold together to Herman Lange.  It was possibly he who removed the porticos from the buildings. 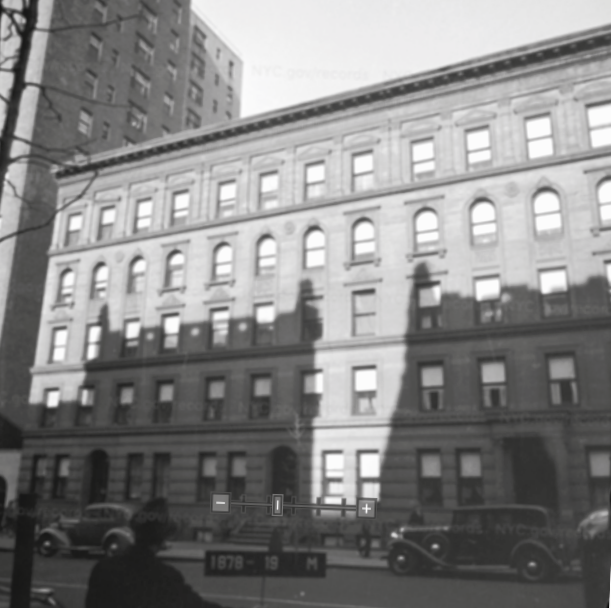 Only 215 West 106th retained its portico in 1941.  image via the NYC Dept of Records & Information Services
Not all the residents along the row made headlines for positive reasons over the ensuing decades.  Robert Billings lived in 217 West 106th Street in 1942.  On March 24 he took a train to Great Neck, Long Island to visit a friend.  But when he arrived at the train station to return home after midnight, he discovered he had missed the last train to New York.  The resourceful 20-year-old solved his problem by stealing the automobile of Hans V. Hermansen from the station parking lot.  Two days later he was still using the vehicle--until he crashed it into a tree in Flushing.  He was arrested on a charge of second degree grand larceny.
Living at 215 West 106th Street in 1950 was William J. McKiernan, a professed artist.  The 28-year-old was arrested in the Strand Hotel in Niagara Falls on February 20 that year on suspicion of sealing $7,000 in American Express money orders.  The clever crook had traveled to Buffalo, New York and opened a bank account under the name of George Selmer Fougner.  He then used the bank book as identification to cash the money orders. 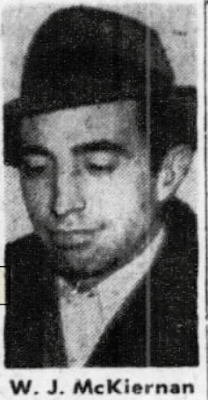 When arrested, McKiernan had several hundred dollars of forged money orders in his pockets.  The Buffalo News, February 21, 1950
He might have gotten away with the crime, had he simply not attempted to cash all the orders in one city.  Detective Sgt. William J. Madigan told reporters, "He made the mistake of cashing too many orders there [i.e., in Buffalo]." 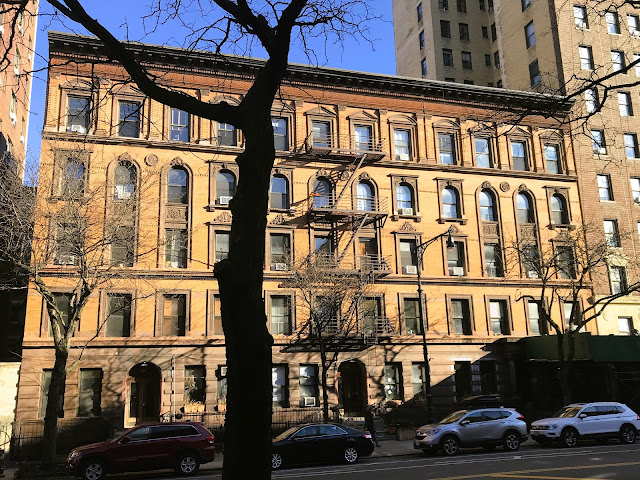 Other than the unfortunate removal of two of the porticos, Nevill & Bagge's distinguished structures are little changed.  And, as was the case in 1895, there are still just two apartments per floor in each building.
photographs by the author
many thanks to historian Anthony Bellov for prompting this post
no permission to reuse the content of this blog has been granted to LaptrinhX.com
Posted by Tom Miller at 1:00 AM