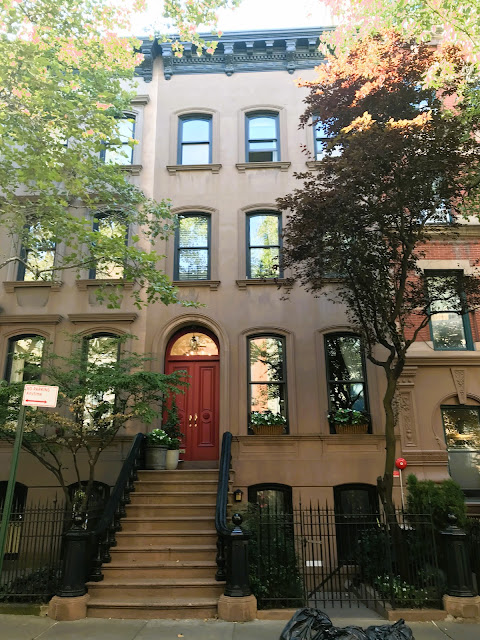 In 1866 architect Robert Mook designed two high-end, Italianate houses at 74 and 76 Perry Street.  Two years later he designed an identical residence for George F. Codding, Jr. at 72 Perry Street.  And then, in 1869, builder William Mulry added to the row by erecting a house at 78 Perry Street.  His was designed by architect John O'Neil.
O'Neil produced a carbon-copy of the Mook-designed houses.  Twenty-feet-wide, it rose three floors above an English basement.  Beefy cast iron stoop railings terminated in paneled newels, and the arched entrance sat below an arched pediment supported by scrolled brackets.  The French-style segmentally arched windows were fully framed and crowned with molded cornices.
Coal dealer Henry Kloppenburg purchased 78 Perry Street from Mulry.  It was at the time numbered 68.  He and his wife, the former Margareta Adelheit (known as Meta), had four children, K. L. Frederick (who went only by Frederick), Anna, L. Matilda, and George Washington.  The youngest, George, was 16 years old when the family moved in.  Frederick, who was 28, was involved in his father's business, Henry Kloppenburg & Son.  The Kloppenburg coal yard was located at 400 West 14th Street.  Years later The Coal Trade Journal would mention that he began the business "several years before the Civil War."
Henry Kloppenburg died in the Perry Street house on November 11, 1892 at the age of 77.  Meta and her two unmarried children, Frederick and Mathilda, remained here for another decade.
Meta died at the age of 89 on August 31, 1902.  Just two months later, on November 2, Matilda died at 58 years old.  Frederick moved to Brooklyn within months, and sold his childhood home to Christian and Ida Jetter in March 1903.  Frederick Kloppenburg supplied their mortgage.
Christian Jetter had begun his milk business in 1880, and merged with the Greenwich Dairy Company in 1901.  It turned out to be an ill-advised move.  Four years after purchasing the Perry Street house, he was forced to declare bankruptcy, The New York Times reporting on January 27, 1907 that he had "liabilities of $18,016 and no assets."  Title to the Perry Street was returned to Frederick Kloppenburg.
The residence was being operated as a boarding house following the Jetters' departure.  Among the residents in 1908 was the widowed Rev. John Rowe, pastor of the Perry Street Methodist Episcopal Church between Greenwich Avenue and Washington Street.  Another boarder was Mrs. Marget Page, who was the victim of a jealous curse that year.
Living nearby at 15 Bank Street were the Kleinders.  Mary Kleinder, who was 37 years old in 1908, suspected Marget Page of "interfering in her domestic affairs."  To remedy the situation, she turned to a curse.  Mary filled small bags with salt and attached "scurrilous letters" to them, as described by the New York Herald.  She then waited in ambush for Marget Page to leave the Perry Street house, at which time she would pelt her with the bags.
Marget Page had Mary Kleinder arrested, telling the magistrate on January 21, 1908 that the bags "were intended to act as an evil charm."  She "stoutly denied" her adversary's accusations of having an affair with her husband, saying "she thought Mrs. Kleinders insane."  The magistrate was inclined to agree and sent Mary to Bellevue Hospital "for examination as to her sanity."
K. J. Frederick Kloppenburg died on February 11, 1914 at the age of 71.  His estate administered the leasing of 78 Perry Street until August 1922, when it was sold to Alfred L. and Millie Laurents.  The couple moved into the house, while continuing to rent space.  Among their tenants was Thurston Macauley, the "publicity expert" for the radio station WGBS.  In 1925 he married actress Marion Berry, and the couple honeymooned on Nantucket Island.  On November 12, The Sun reported that they had returned and "are living at 78 Perry street, in the Village." The lure of Cape Cod, however, was tugging that the newlyweds.  The article noted, "Mac now talks of buying a house in that quaint old place and settling down there."
In 1935 the vintage house was converted to apartments and the façade modernized.  The stoop was removed, the entrance lowered to the basement level, and the window cornices shaved off. 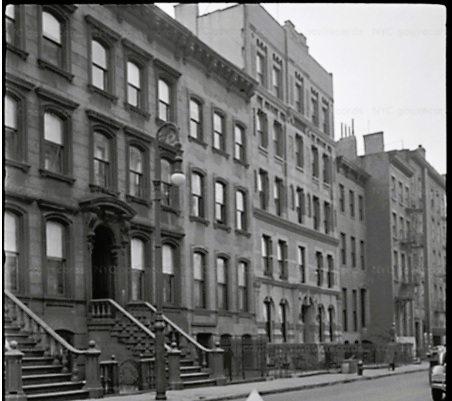 The modernization of 78 Perry Street (middle) is seen here in 1941.  Next door, 76 Perry Street (to the left) exhibits its original appearance.  image via the NYC Dept of Records & Information Services.
Occupying an apartment in 1948 was "pretty Ann Lohmann," as she was described by The New York Age on December 25.  A year earlier she had begun an intimate affair with attorney Samuel Allen Early, Jr. a member of the District Attorney's office.  The young lawyer was married to "the cultured and talented actress" Theodora Smith Early.  Unlike Mary Kleinder, Theodora Early did not pelt Ann with cursed salt bags, but with a law suit.  The well-publicized court proceedings, involving interracial sexual relations, caused a sensation.  The New York Age began its article saying, "The wreck of a marriage of brilliant promise because of her husband's alleged love for a white woman was disclosed in Supreme Court in a suit whose full revelations may be sensational."
Before 1969 the exterior of the house had received a second humiliation.  The brownstone was given a brick veneer and stucco was applied over the window frames. 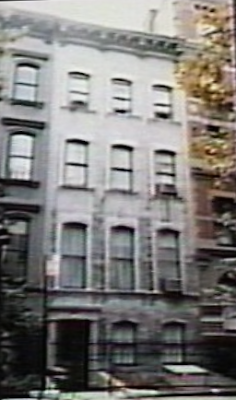 image via the NYC Dept of Records & Information Services.
But deliverance would come.  When Arnold Saltzman purchased 78 Perry Street in 1989 it held six apartments. He initiated a restoration/renovation, completed in 1992, which resulted in a triplex in the basement through second floors, and two apartments on the third.  Using the surviving examples at 74 and 76 Perry Street, the architects refabricated the missing stoop, including the Italianate iron railings and newels.  The molded window frames were replaced, minus their cornices, and historically perfect double entrance doors were installed.  Saltzman stopped short of reconstructing the complex brackets and pediment of the entrance.  The laudable re-do received an award from the Landmarks Preservation Commission in June 1992. 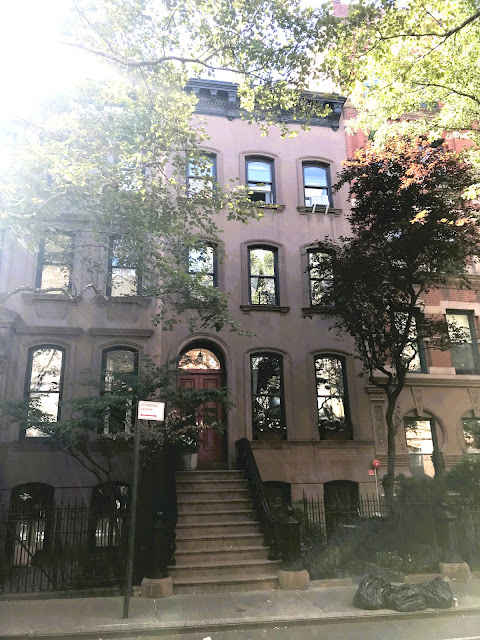 photograph by the author
no permission to reuse the content of this blog has been granted to LaptrinhX.com
Posted by Tom Miller at 1:00 AM